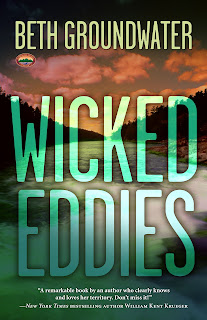 Last weekend I posted photos from my vacation in Mazatlan, Mexico, and I said that while I was there I also did some writing work: editing the galley proof for my upcoming May release, Wicked Eddies, which will be the second book in the RM Outdoor Adventures mystery series starring whitewater river ranger Mandy Tanner.

What is a galley proof? It is the final layout document of a book, with everything positioned exactly on each page, that will be sent to the printer. The proof is sent to the author before it goes to the printer, so the author has one last chance to scour the book for errors and eliminate them. So, I went to work pouring over every page and scrubbing them clean. By the time I finished, I had created a six-page file of about 140 change requests.

What kinds of change requests? Most were small one word or one punctuation mark changes. For instance, in dialogue, I leave contractions with "had" and "would" as contractions, but in narrative, I prefer to spell them out, especially when it's a little unclear whether "she'd" means "she had" or "she would." I found some of those contractions in narrative and changed them. Also, in dialogue, I allow characters to leave out the "of" in phrases such as "all the boats", because we all do that naturally. However, in narrative, I want the "of" to be there, so it would read "all of the boats."

There were such changes as a comma that should have been a period or vice versa, a word that should have been plural and was missing an "s", changing "extra" to "additional" because there were already two other "extra" words in the paragraph, and so on. And, on re-reading, I decided that some of my sentences were too long, and I split them up into two.

One of the larger changes included writing a Dedication, which had been left blank in the galley proof. Another was making sure that real-life organizations were listed by their correct name, such as "Pueblo County Coroner’s Office" versus "Pueblo coroner’s office." And I had mistakenly called the "Chaffee County Sheriff's Office" a department instead of an office a few times.

A couple of times, I rewrote sentences, mainly to put the phrases in cause-effect order or time-sequence order. However, I was very careful to make sure that any rewrites wouldn't change the pagination of the galley proof, that they were about the same length as the original text. Inserting or removing a paragraph is a big no-no at this stage, because that could have a trickle-down effect that would cause multiple pages to be completely re-done.

Lastly, during the same vacation, I was reviewing an ARC of Dr. D.P. Lyle's upcoming release, More Forensics and Fiction, Crime Writers' Morbidly Curious Questions Expertly Answered. In that book, he explains that water in the lungs is not definitive evidence of drowning in and of itself if a victim's body is left submerged more than twelve hours. This is because the lungs passively fill with water as the air seeps out. Instead, debris or organisms from the body of water in which the victim is found must also be found in the victim's lungs to say death was caused by drowning. So, I made a small change in dialogue about my drowning victim's autopsy to address this. Thank you, D.P. Lyle!

Even though my editor and I have both done a thorough review of the galley proof, I'm sure some small errors or typos will remain, much like the river debris in my victim's lungs, to show that yes, we are human and we make mistakes. I sure tried my best, though, to make Wicked Eddies as perfect as I possibly could. Now, the matter is out of my hands. It will be up to the readers to let me know how well I did!
Posted by Beth Groundwater at 5:00 AM