As promised in my previous post about my husband's and my recent trip to the Netherlands and Belgium, I'm posting a montage of photos today from the King's Day celebration in Amsterdam on Saturday, April 26th, the king's birthday. Since the king comes from the "House of Orange" monarchy family of William I, the first king of the Netherlands, people deck out in orange colors to celebrate the holiday.

In the first photo below is the Quo Vadis bike barge chef dressed up for the holiday, and in the second is a vendor's cart selling orange-wear. The third photo shows a typical poster for the holiday. After touring the Rijksmuseum (fourth photo below), we came out on Museumplein (an open square) where people were swarming around the "I Amsterdam" sculpture behind the reflecting pond to have their photos taken. 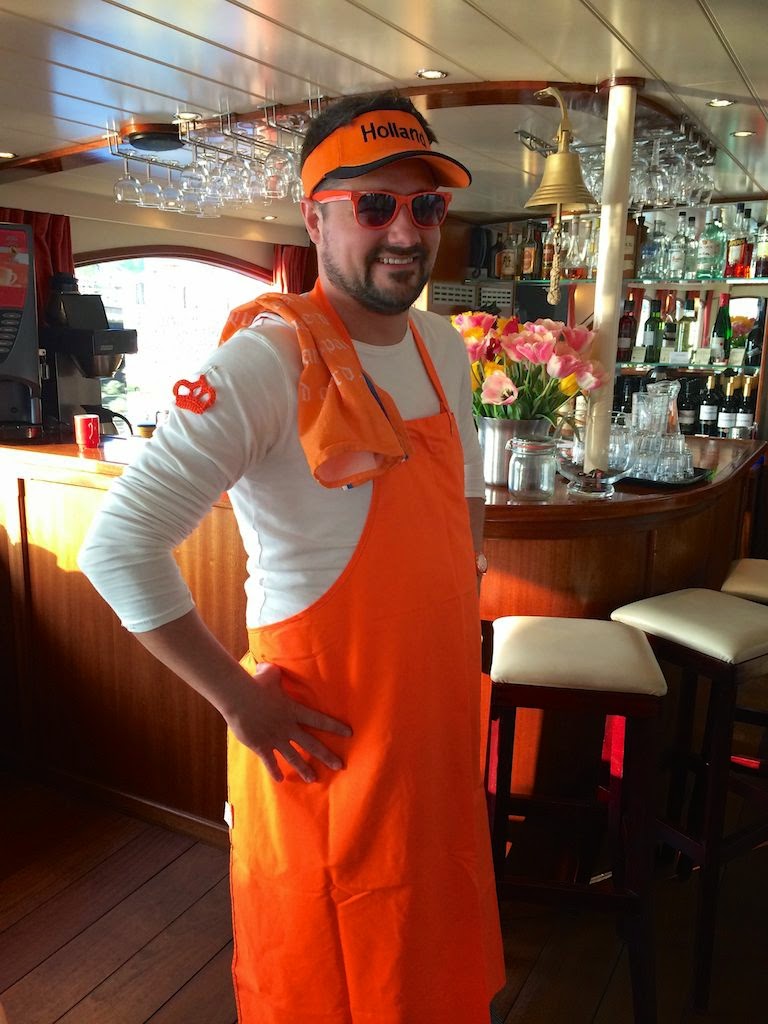 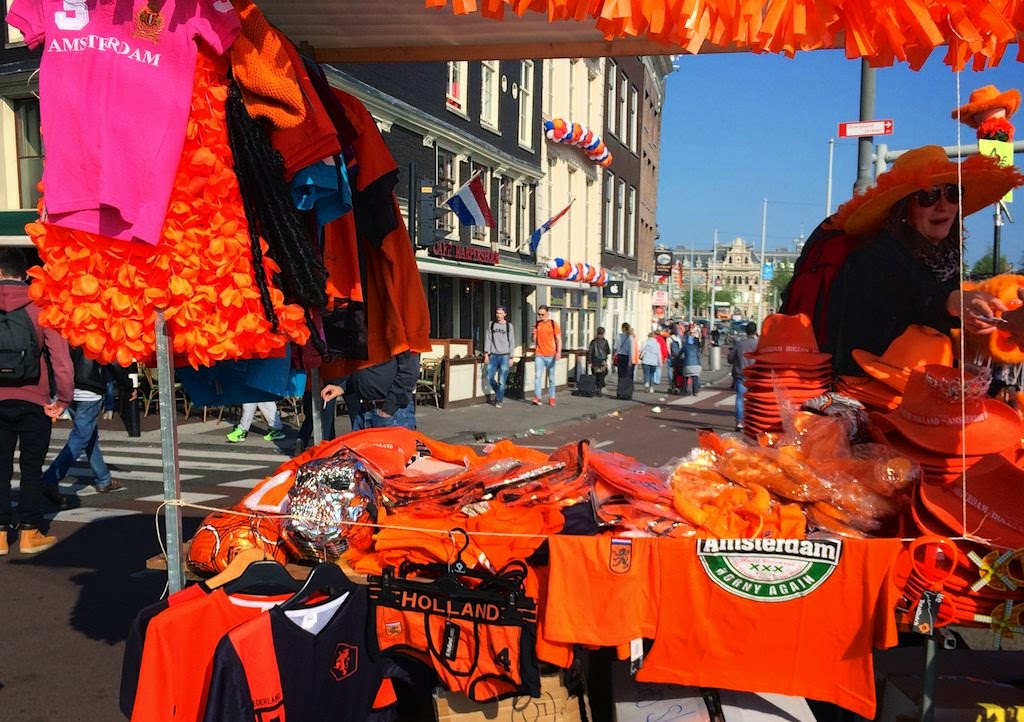 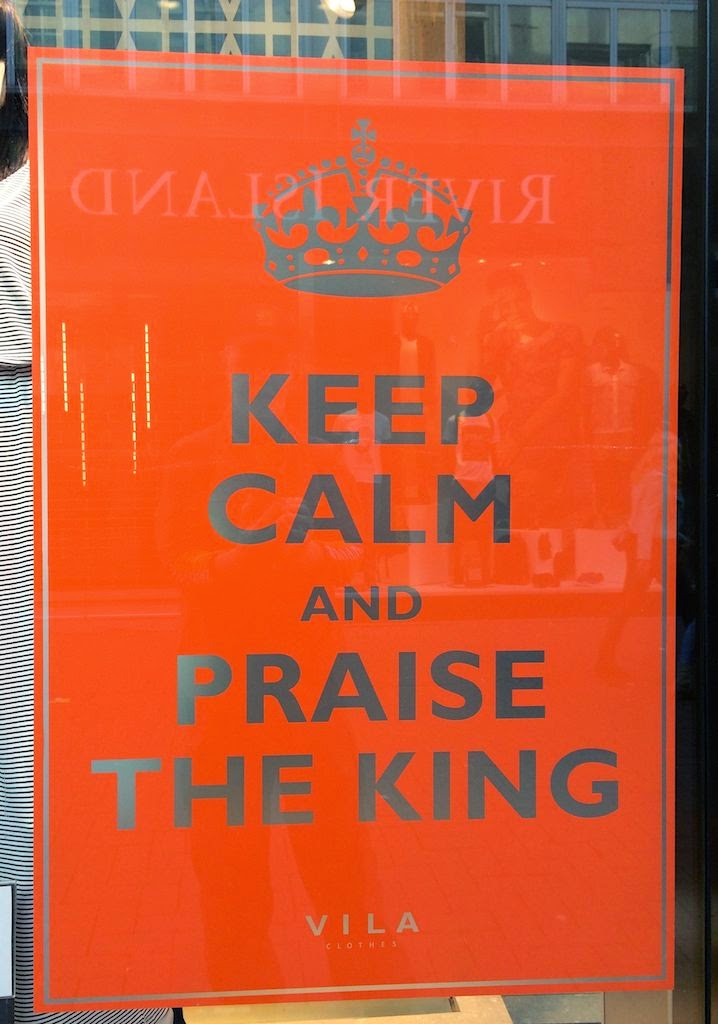 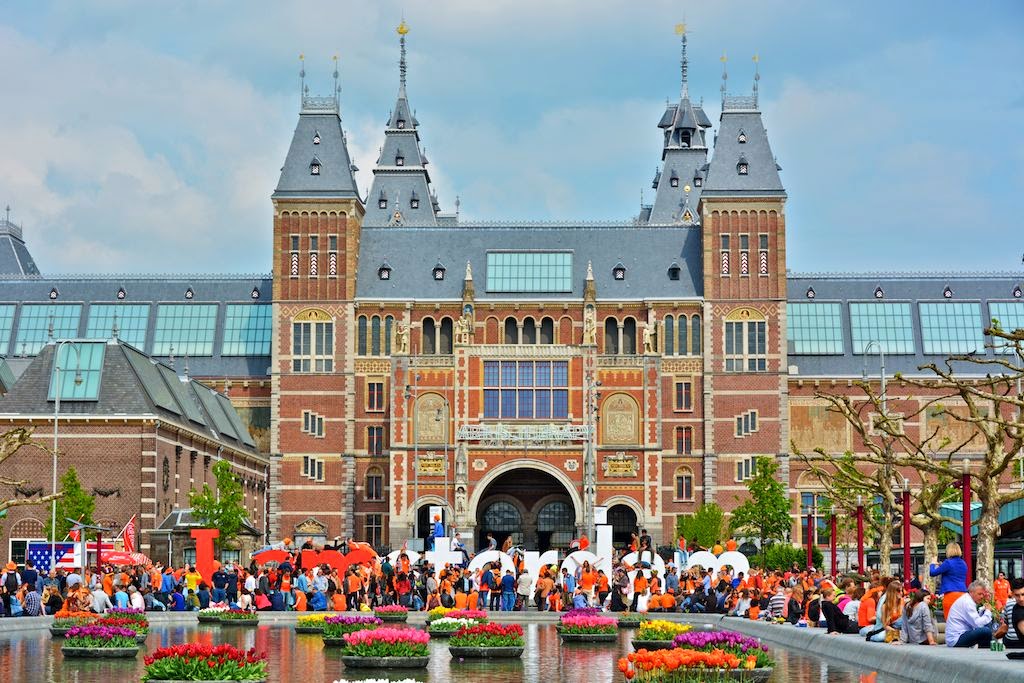 Then we walked to Vondelpark, which was set aside for family/children's celebrations. Notice the orange crown on the statue in the first photo below. Since King's Day is a tax-free day, locals celebrate with yard sales and by setting up food/drink stands outside on their front stoops to make some money. The children were doing the same thing in the park, selling their old clothes and toys and snacks/drinks (see the "King of Crepes" dad in the second photo below) and performing (singing, playing instruments, etc.) for money. Also, some had set up games (such as fishing ponds and the game shown in the third photo below) for people to play for money. I'm mugging it up with some locals in the fourth photo and you can see folks swarming a second "I Amsterdam" sculpture in the next to last photo below. Everywhere in the park, people were picnicking in the sunshine (last photo). 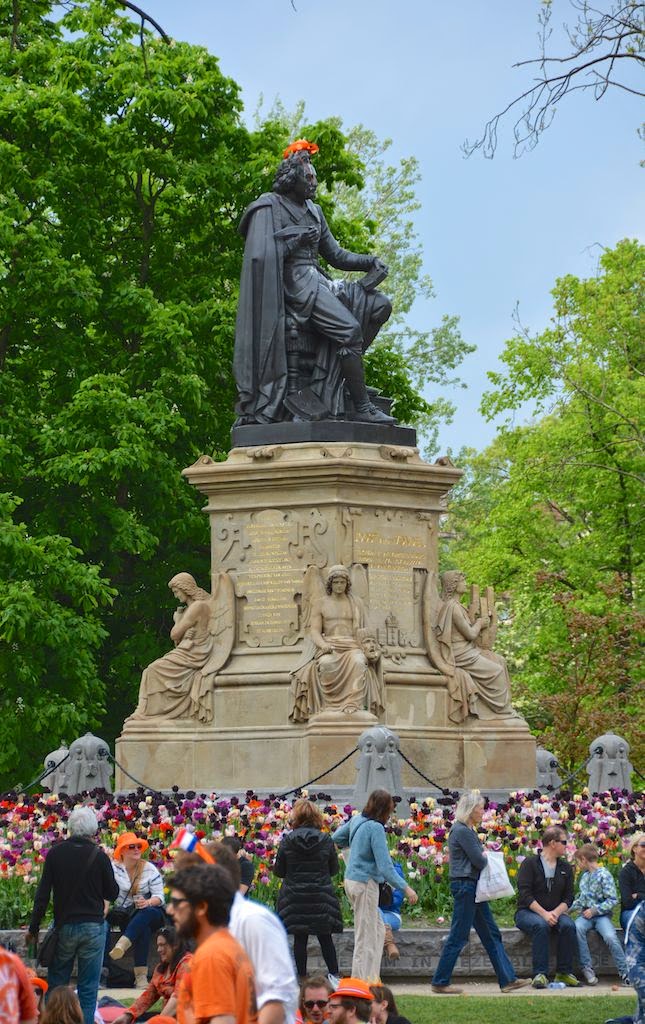 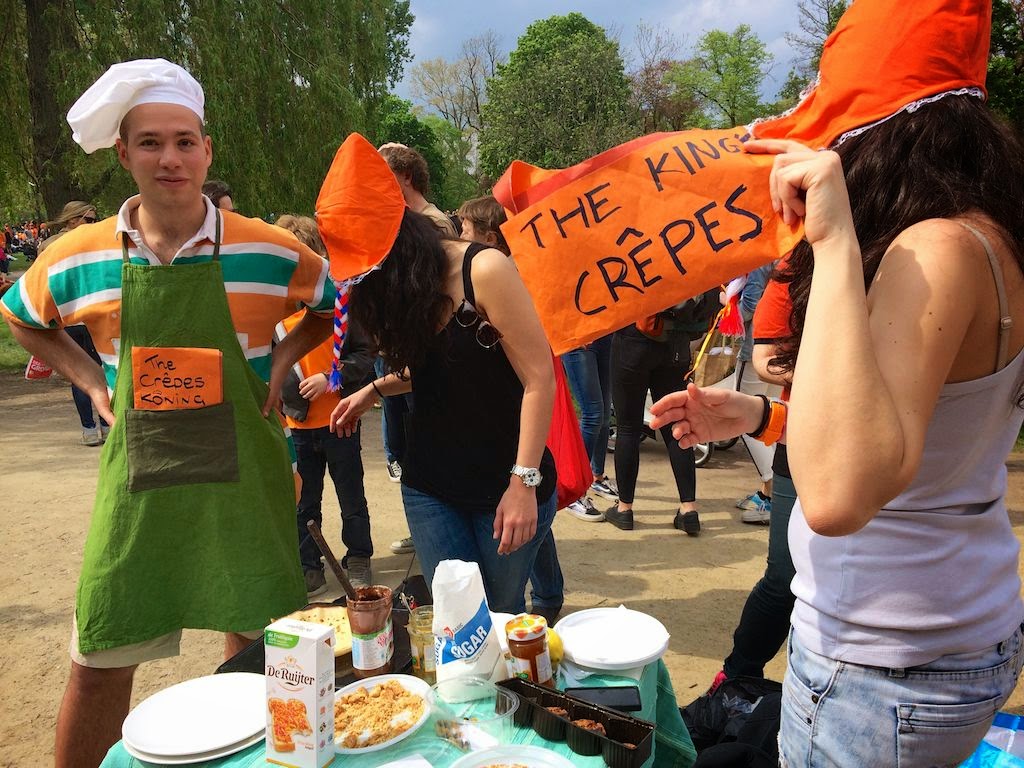 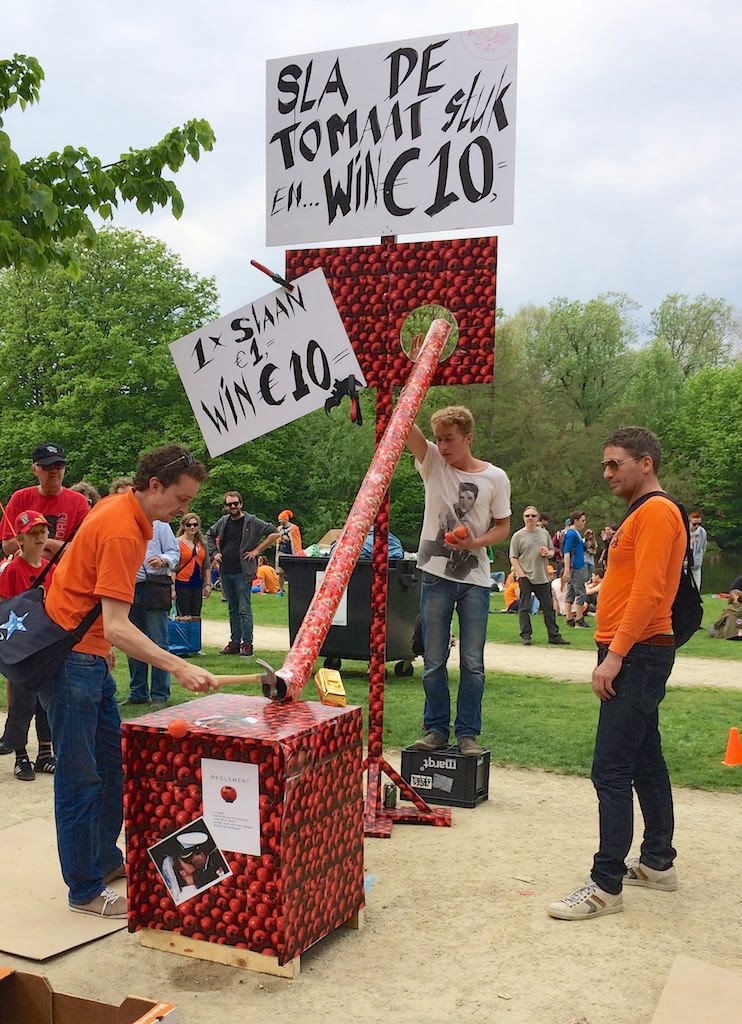 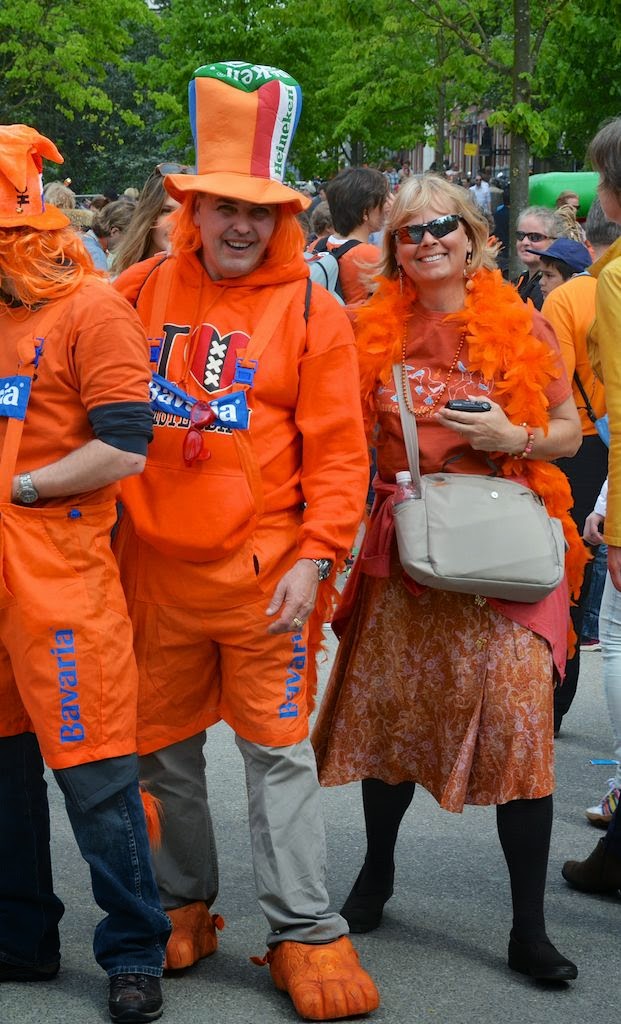 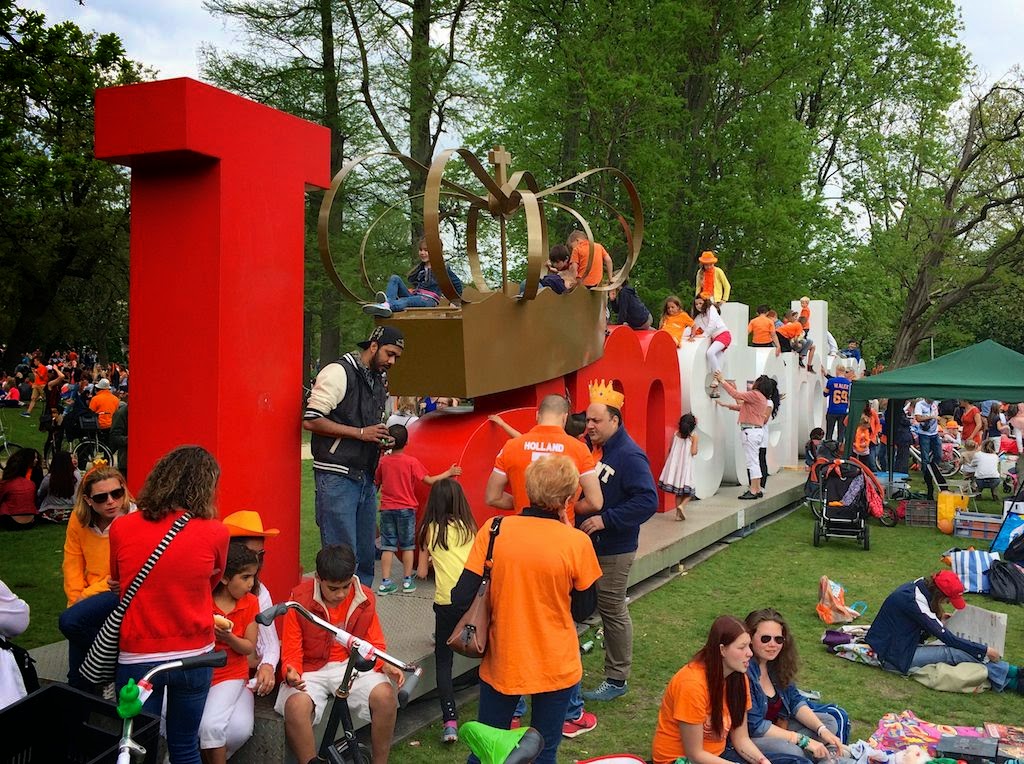 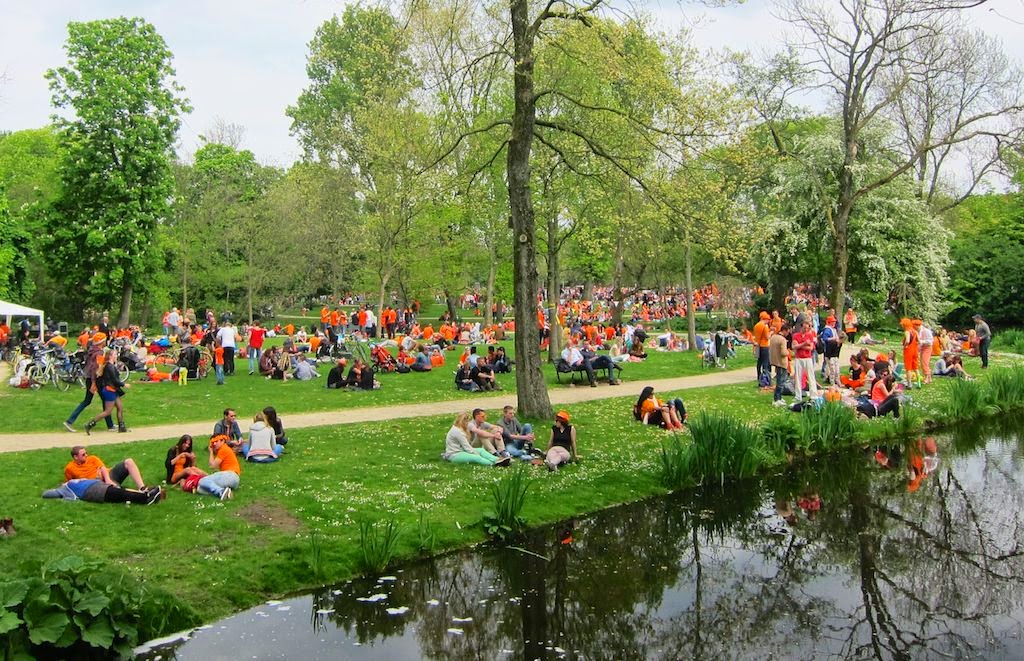 After Vondelpark, we wandered the downtown streets, which were closed off to cars and public transportation, and just joined in the raucous merriment. Bars hosted DJs and bands that played in the streets, and even the canals were clogged with party boats! 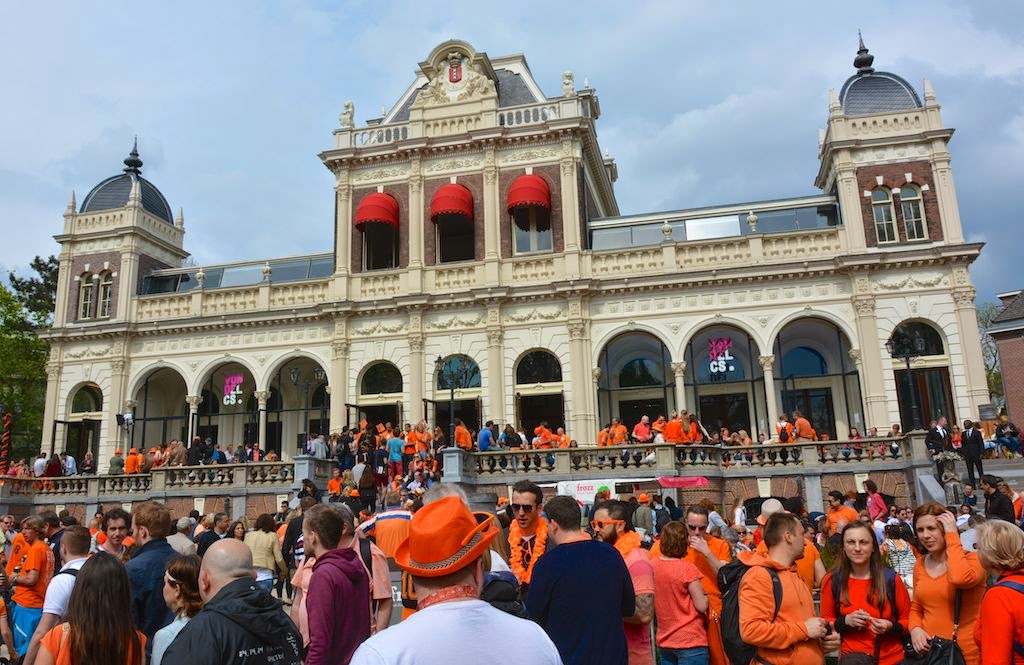 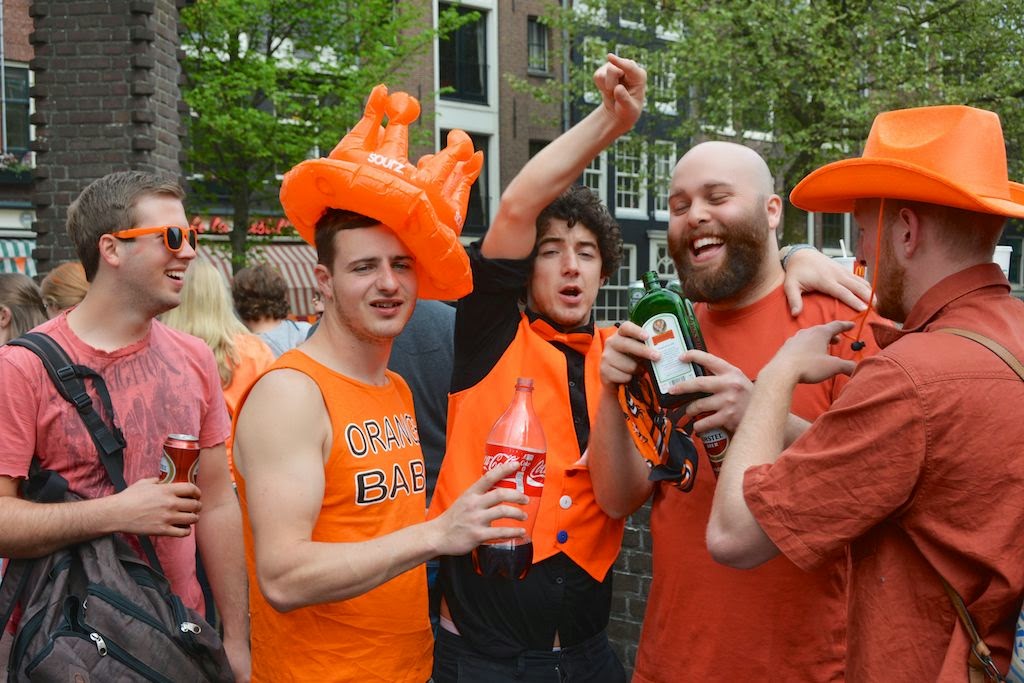 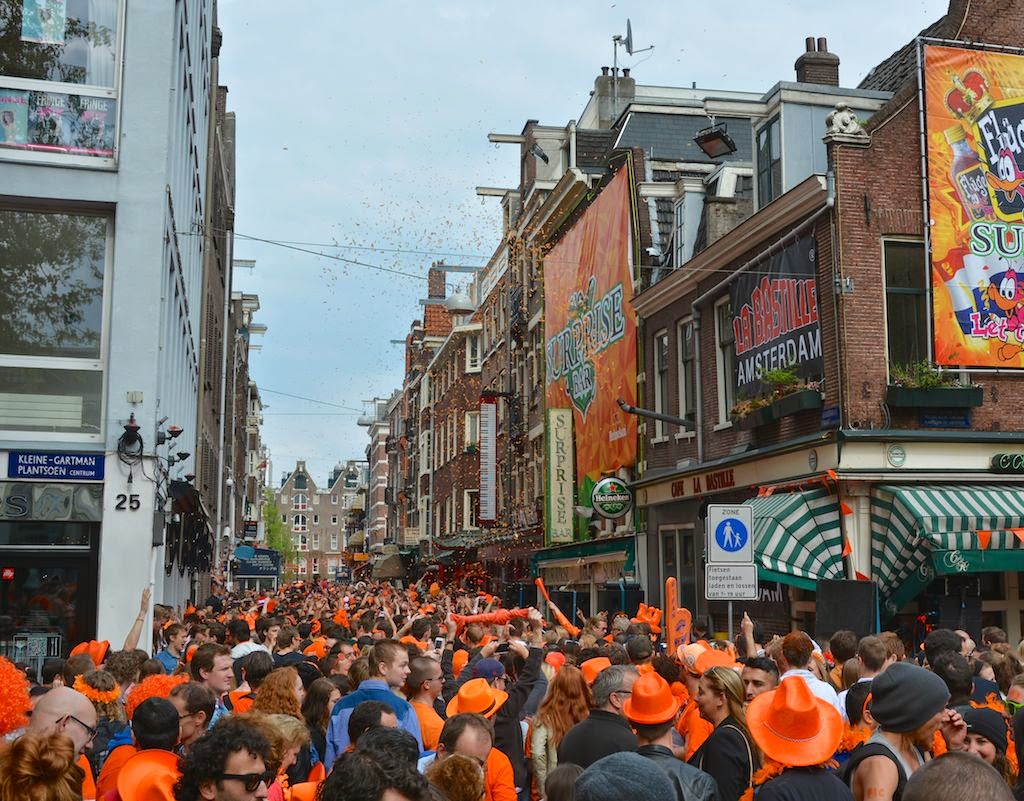 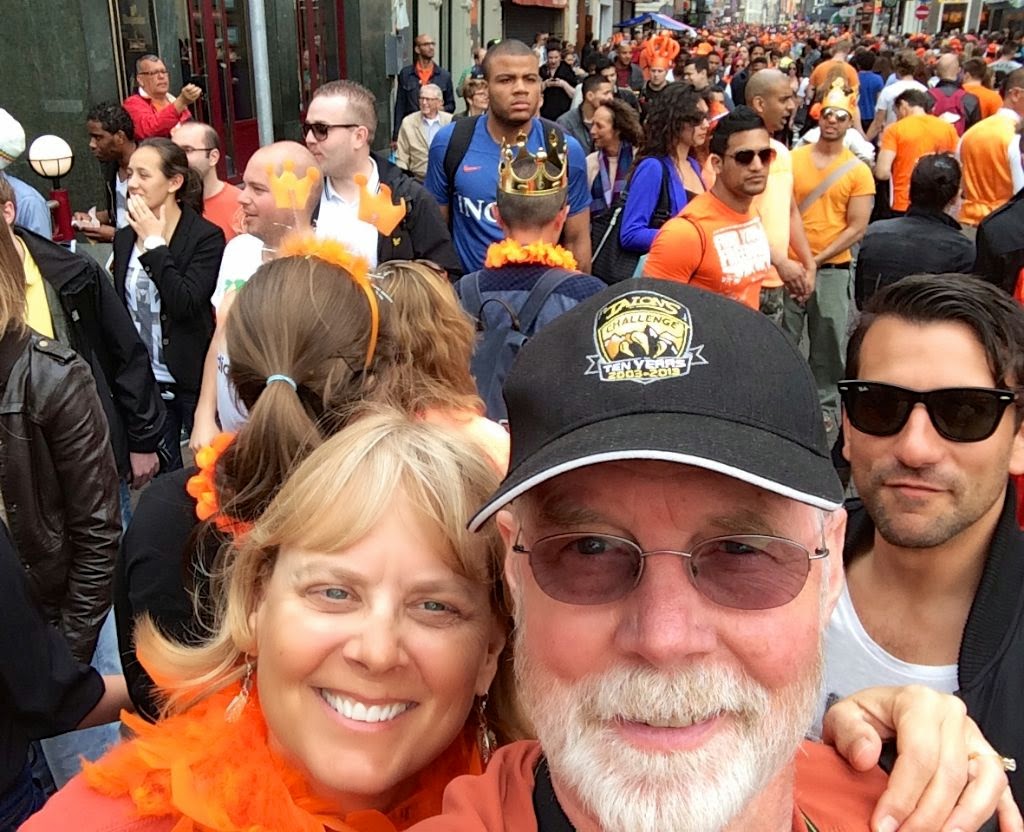 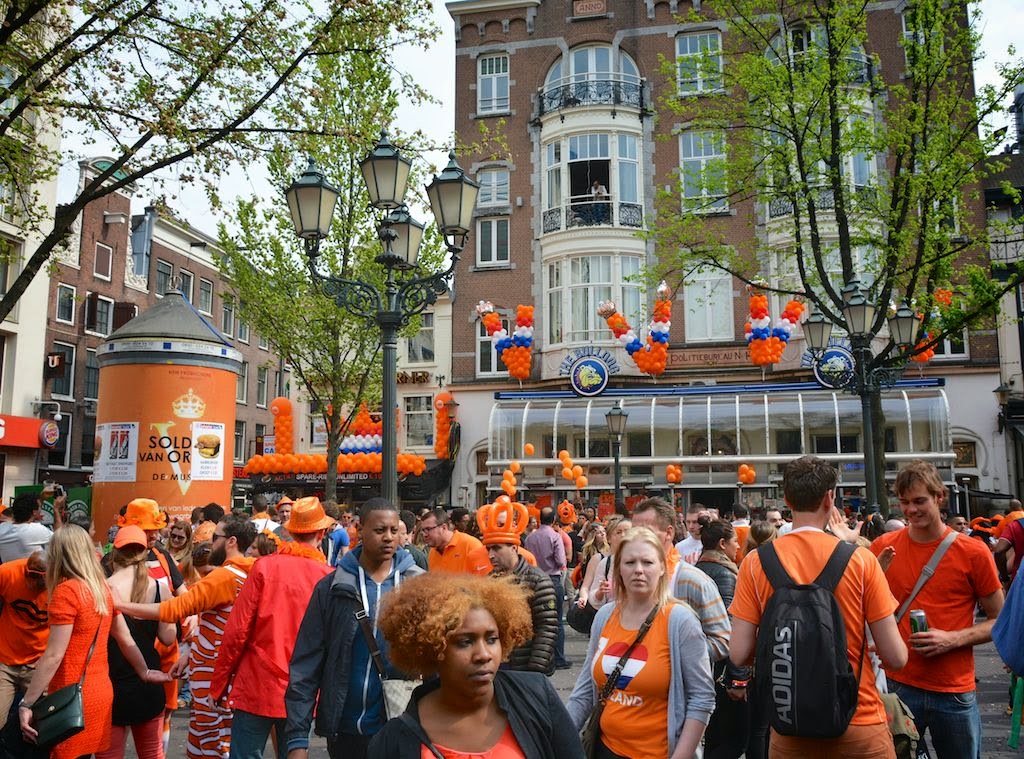 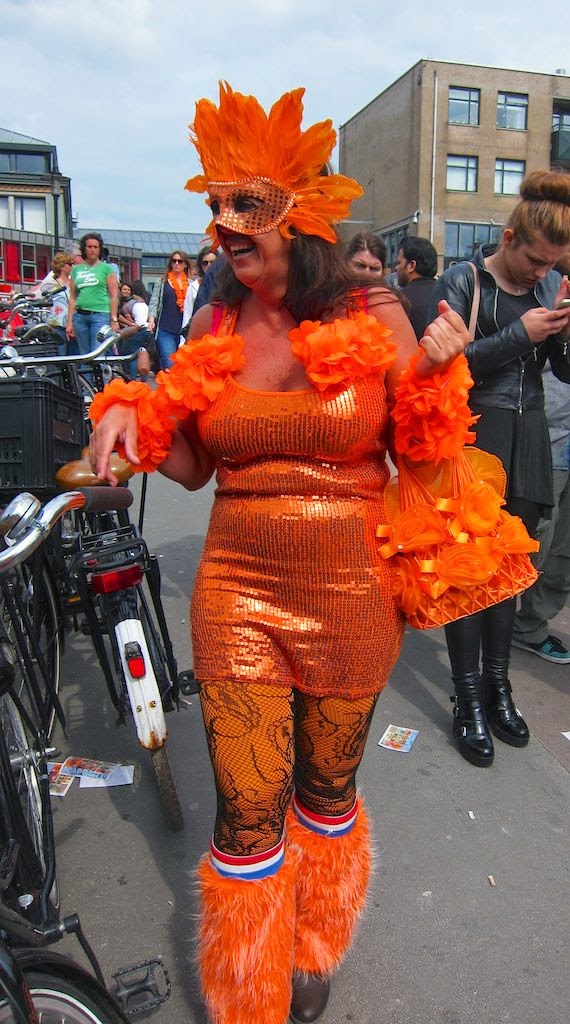 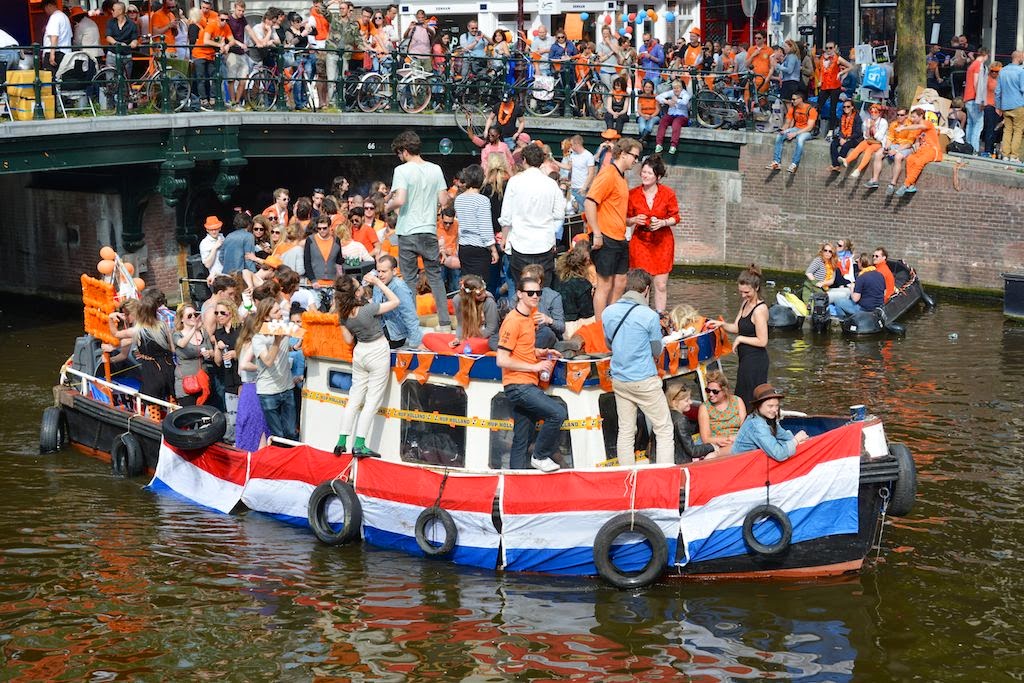 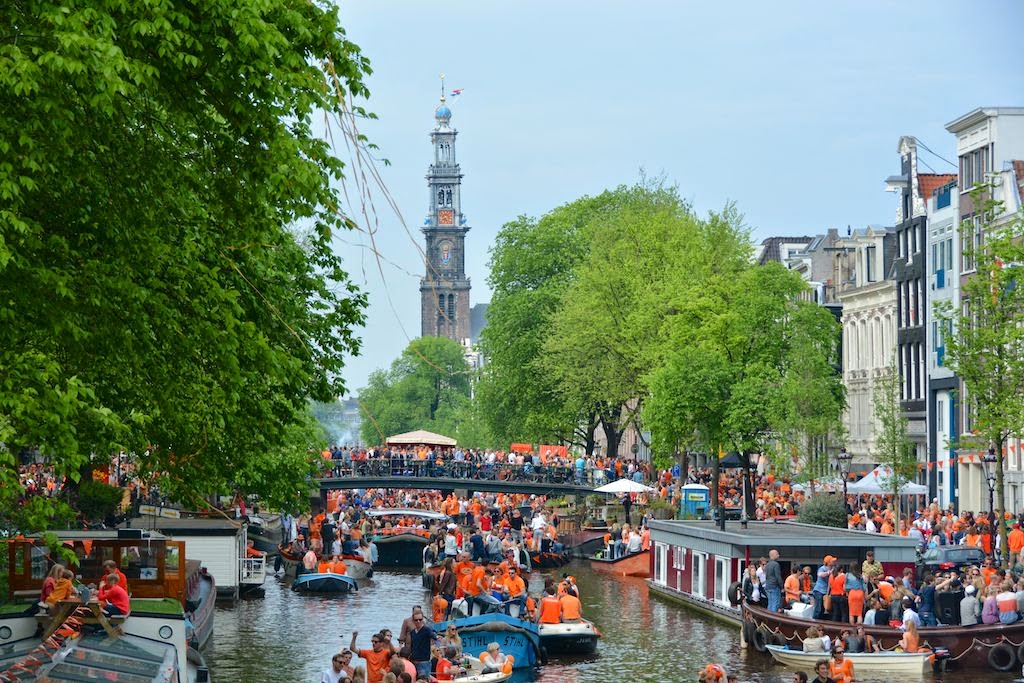 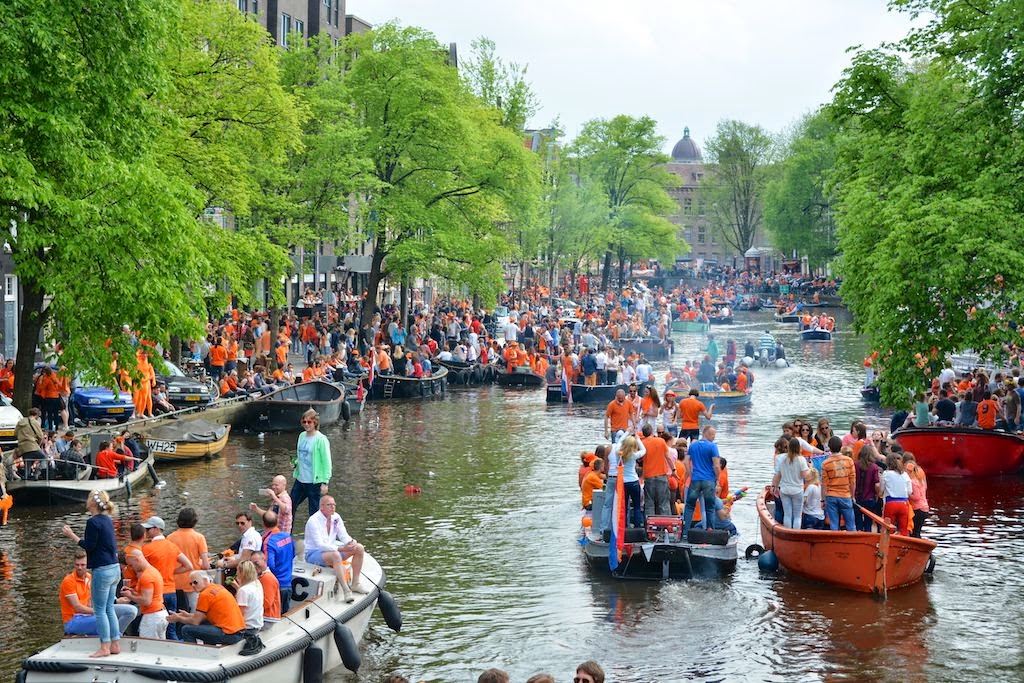 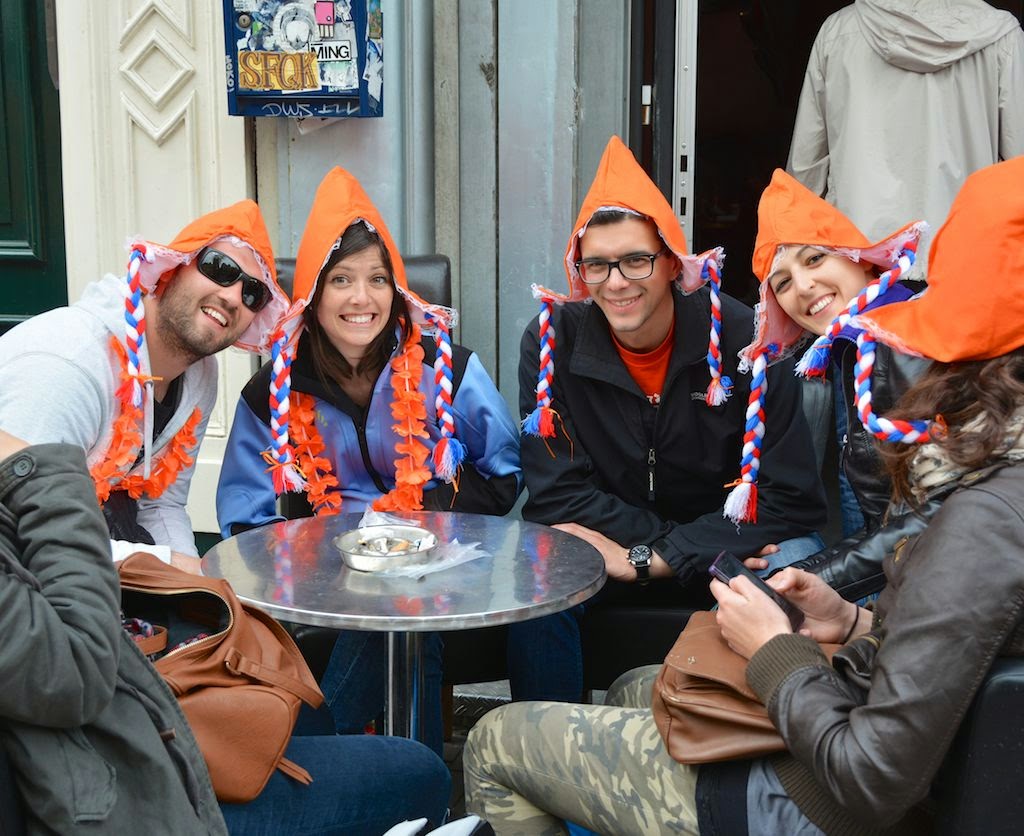 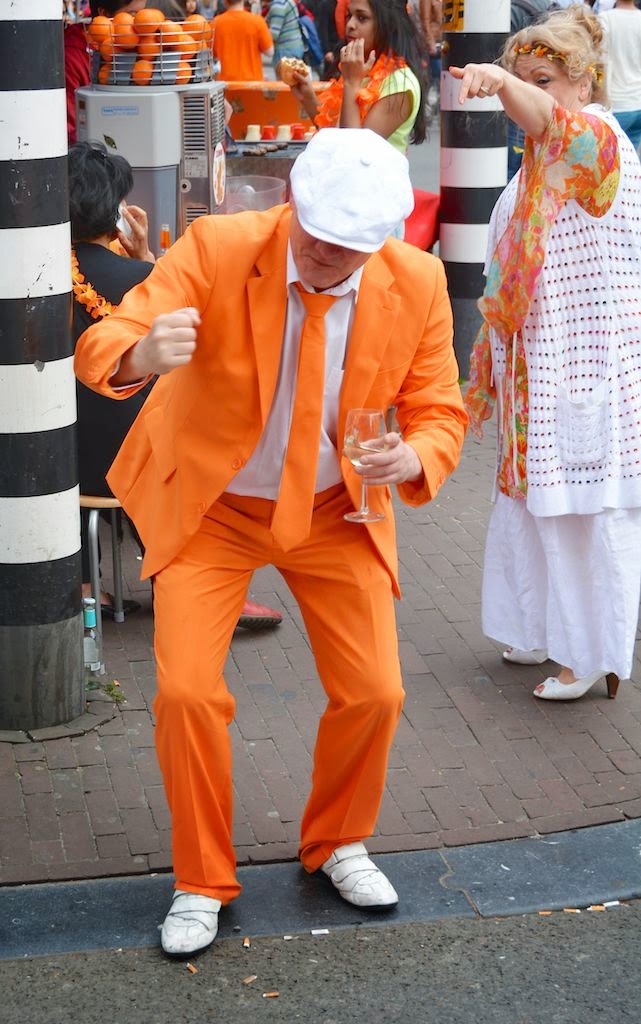 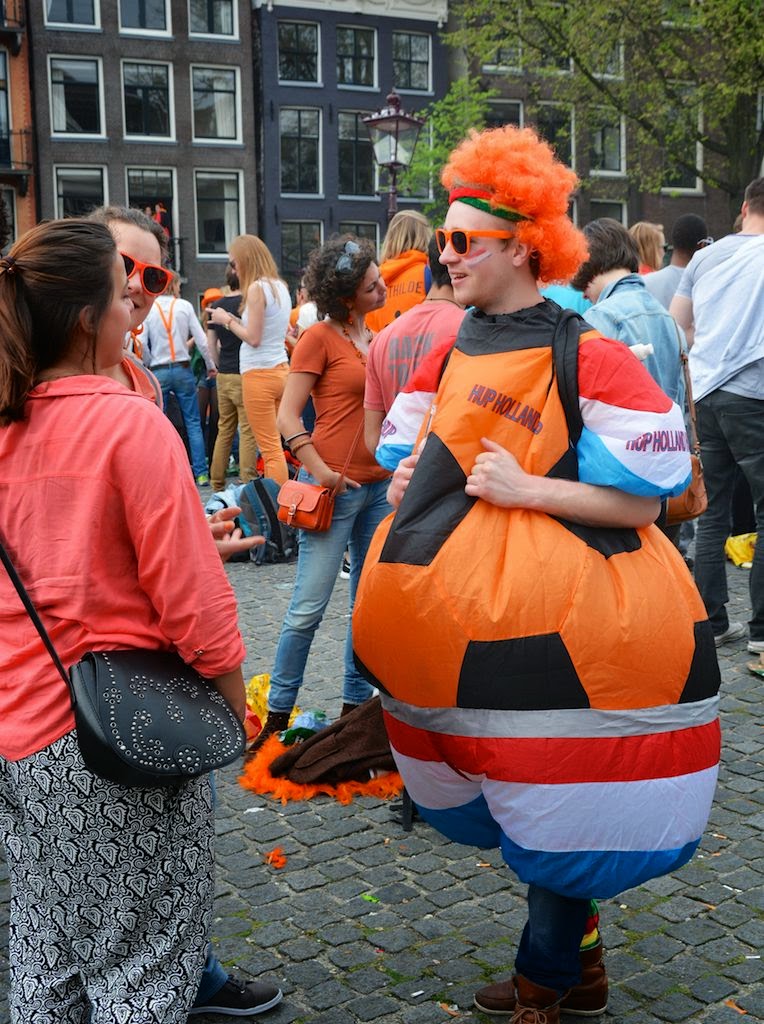 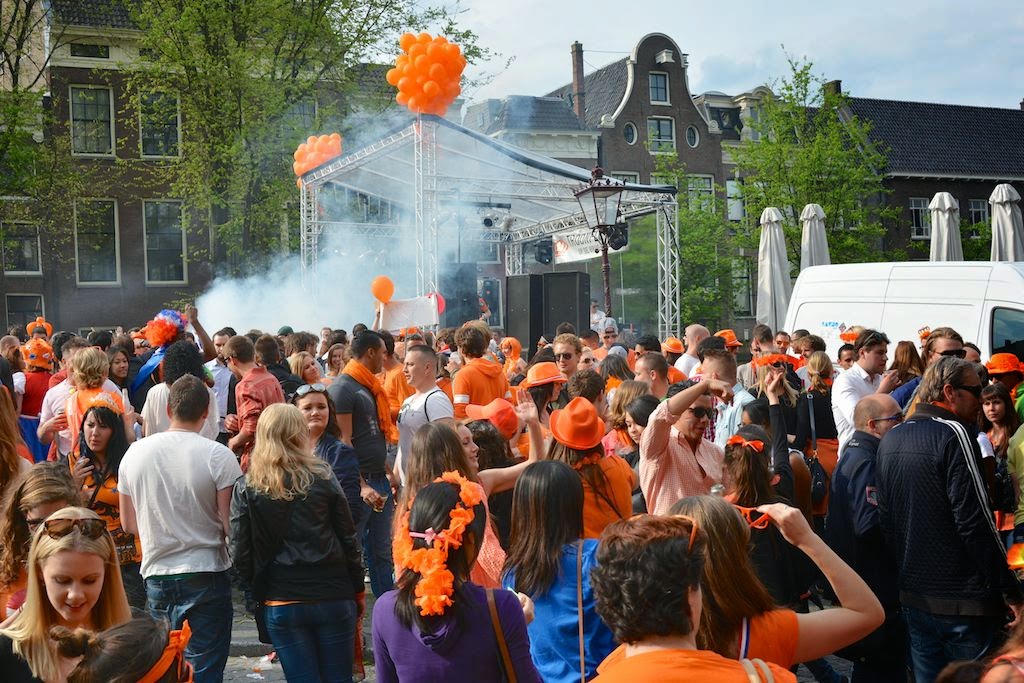 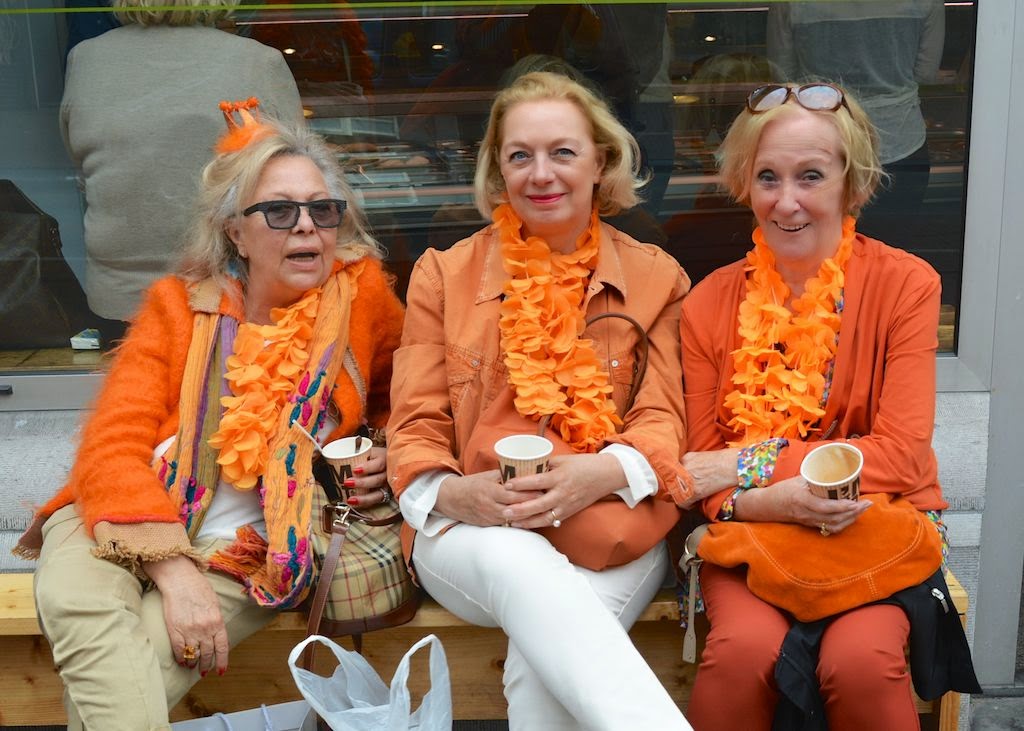 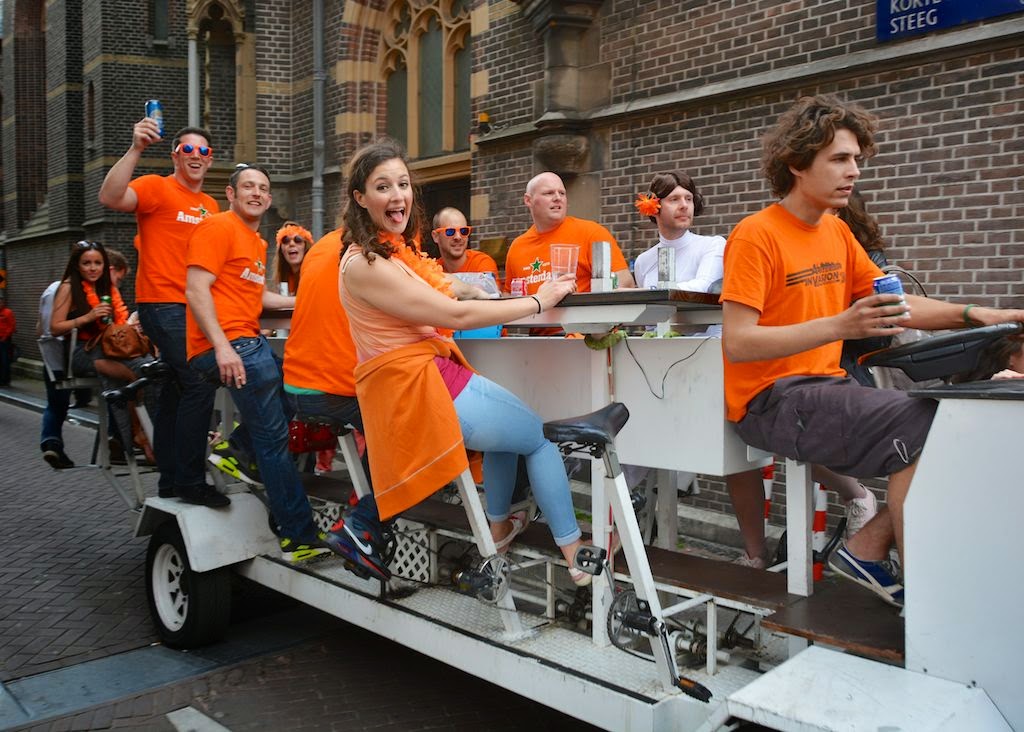 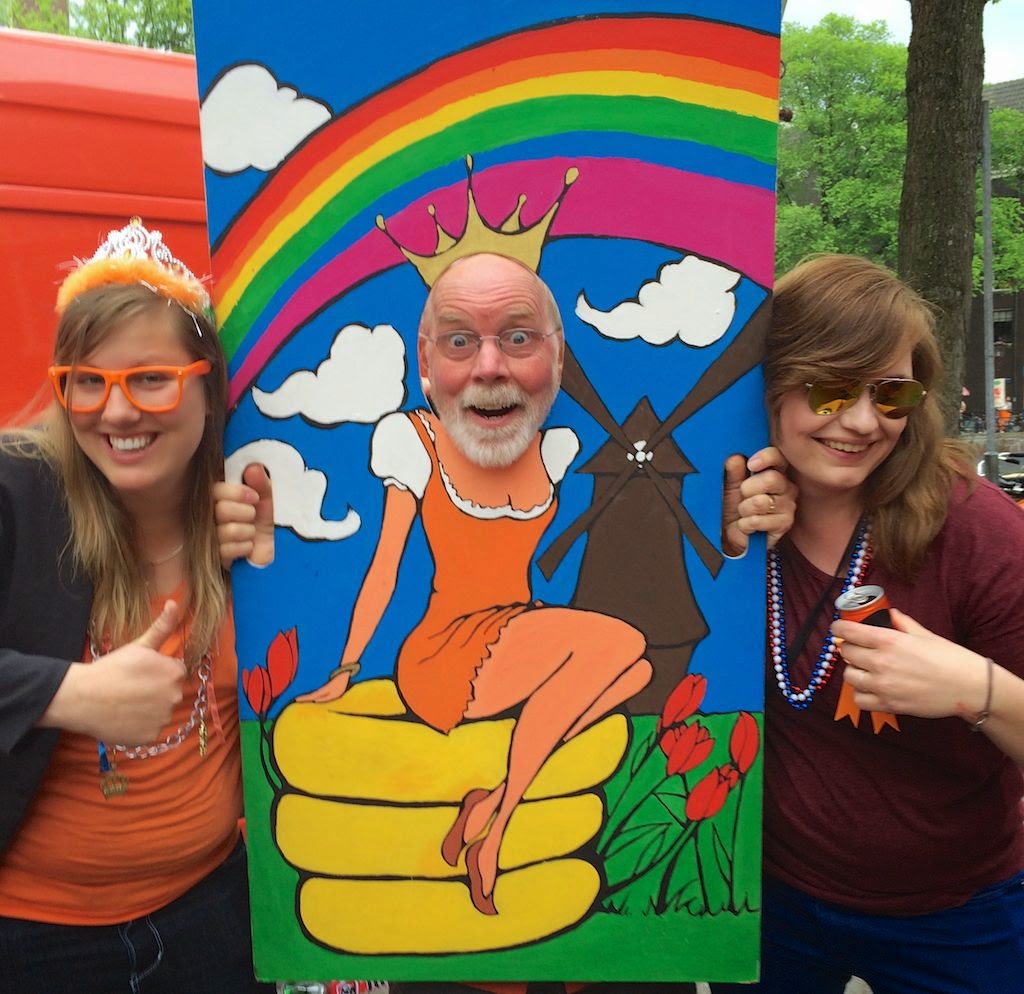 In the evening, we visited an acquaintance in the Joordan neighborhood, who had an excellent view from his rooftop patio (first photo below). As the party wound down in the evening, you can see the trash that had piled up in the streets in the second photo below, and the police presence (wearing yellow vests) that peacefully cleared the streets in the last photo. The next morning, we were amazed to see the excellent job the street sweepers had done to clean up the mess while we all slept. 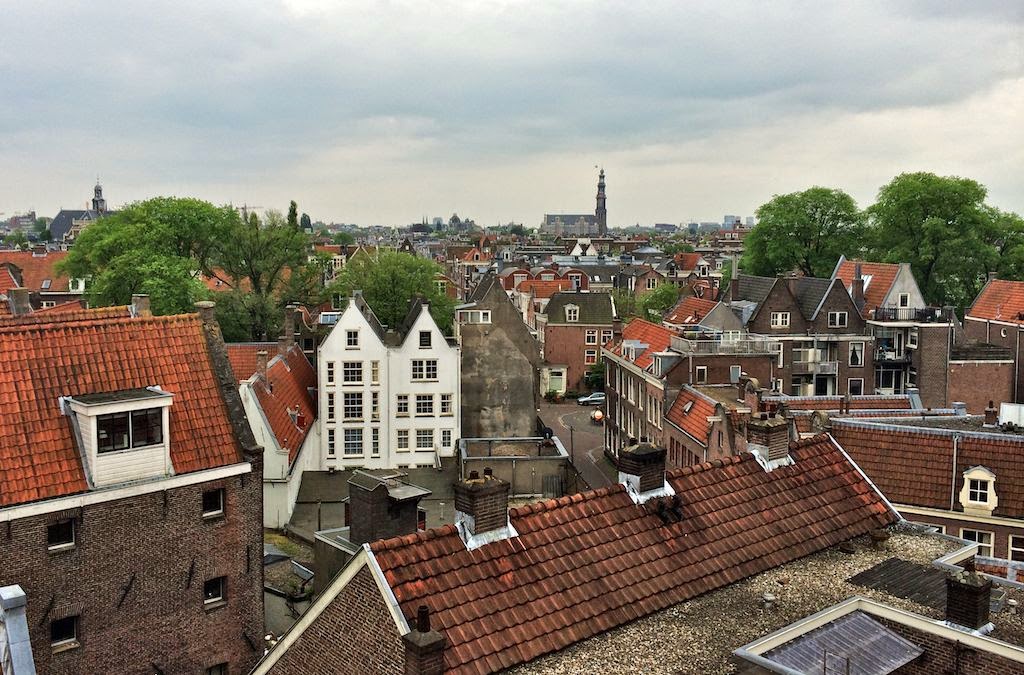 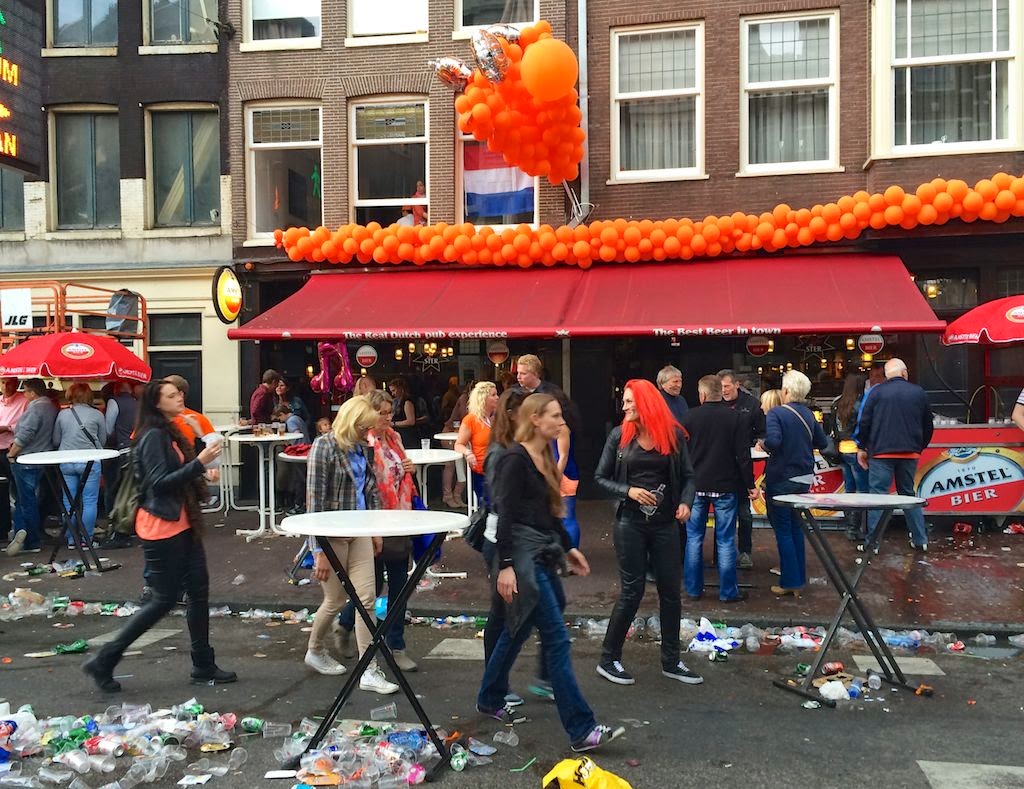 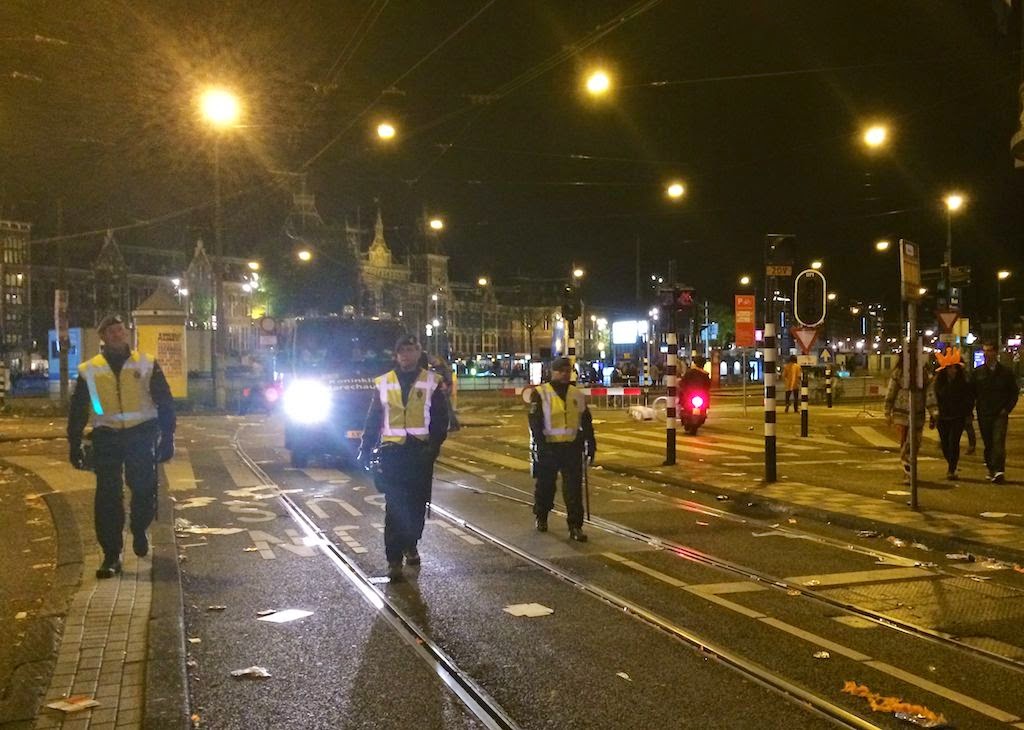 Posted by Beth Groundwater at 7:00 AM No comments:

In Bruges -- and Amsterdam, Delft, Brussels and more!

My husband and I recently returned from a three week trip to the low countries of Europe, the Netherlands and Belgium. It was a fantastic trip, and I learned a lot about both countries and the European Union, which is based in Brussels. Our trip combined a week-long bike/barge trip on the Quo Vadis barge (on which we visited Alkmaar, Zaandam, Haarlem, Aalsmeer, Leiden, and Kudelstat) with two weeks of sightseeing on our own in Amsterdam, Delft (including one day in The Hague nearby), Bruges and Brussels. I hope to post some photos after my husband makes his first pass through the thousands we took (mostly by him). In the meantime, I'll share some written impressions. Here goes!

Weather - We have many biking friends in Summit County who have made bike/barge trips in the Netherlands and/or Belgium in the spring, and they warned us to be prepared for bad weather--wind, rain, and chilly temperatures. We lucked out, and it only rained for one half day of biking, for which we were well-prepared with rain coats, rain pants and hazmat booties. Yes, you read that right! Our bright yellow neoprene hazmat booties kept our shoes and socks toasty dry, greatly amused our traveling companions and were cheap, too. The bike guide and barge captain also put their heads together and when needed, modified our route so we were mostly biking with tail or side winds versus head winds. All in all, it was easy biking for us (averaging 30-40 miles a day) and the only hard workouts were when we battled head winds. Also, we managed to avoid the rain for most of our sightseeing days, only getting caught in showers a couple of times. We always wore a fleece/sweater layer and carried our raincoats with us, though, so weather turned out not to be a concern.

Flowers - The bike/barge trip was billed as a tulip sightseeing trip, and boy, did it deliver! We pedaled past tulip fields that were bright swaths of color (so entrancing that I crashed my bike one time because I was too busy looking at the fields). We also observed the flower auction at Aalsmeer, looking down from the overhead catwalk onto bustling workers shuffling carts of flowers of all kinds from all over the world as flower distributors bid on them via a "Dutch auction." The best day, though, was visiting Keukenhof, the second largest flower garden in the world, in the midst of tulip season. All of the tulips were in full-bloom, it seemed, and the colors were truly spectacular. Even I snapped dozens of photos. Later, while on our own in Brussels, we visited the Royal Greenhouses of Laeken, which are only open to the public for three weeks each spring. The huge Victorian Art Nouveau greenhouses of iron and glass are awesome to see on their own, but the contents were even more so! The massive glass domes and connecting glass-covered walkways were filled with ornamental palms and trees and millions of blooming flowers of all kinds. Again, the cameras went to work!

Food - On the bike/barge trip, we visited an organic cheese farm situated on an island in a huge lake and sampled some of their award-winning cheese, one variety of which won the first place prize for its class in all of the Netherlands. We bought some to eat on the trip and some of their special aged cheese to bring home. Yum! Speaking of yum, these countries know how to do chocolate. They eat it for breakfast! You're served chocolate sprinkles to put on your yogurt or cereal, chocolate paste to spread on your bread, and/or a piece of chocolate or chocolate cookie with your coffee. Now that's what I call a great start to your day! Our baker son, who spent a month in Bruges for his culinary degree, told us that if we bought any chocolate in Belgium, we should get it from The Chocolate Line in Bruges. The chocolate chef is known for experimenting with savory flavors such as black olive, wasabi, saki, earl grey, cola, bacon, cannabis, and more, and we sampled quite a few of those confections! We also ate very well on the barge, which had a superb chef, and tried to sample some traditional Flemish dishes while traveling.

Beer -We toured two breweries on our trip, the Heineken Experience in Amsterdam and De Halve Maan (The Half Moon) brewery in Bruges. Needless to say, we drank samples on those tours. We also found that sitting down in a cafe or pub on a square for some relaxation and some Belgian beer was a great way to conclude a day of sightseeing.

Holidays - We celebrated quite a few holidays and special occasions on the trip. First was Easter our second day on the barge, with a breakfast including boiled eggs, chocolate eggs, and a stollen-like bread studded with dried fruits and wrapped around a marizpan core. A couple of days later, we celebrated the chef's birthday and the 82nd birthday of the oldest biking guest with a dense butter- and almond-laced cake baked by the chef that was to die for.

The day we got off the barge in Amsterdam was the first national King's Day holiday (celebrated on the new king's birthday, which was previously celebrated a few days later in the month on the former queen's birthday). Since it's a tax-free day, Dutch citizens celebrate with yard sales and sell food and drinks on their front stoops. After touring the Rijksmuseum in the morning, we walked to Vondelpark which was set aside for children's celebrations, where the kids sold stuff; were buskers playing instruments, singing or dancing for donations; or had created games for passersby to play for money.  It was a lot of fun to see their creativity! Then we wandered the streets of the central town, snapping photos of ourselves with locals in outlandish orange costumes (the royal family is the House of Orange), listening to DJs spinning tunes outside every bar in town while crowds danced and drank, and watching hoards of boats plying the canals, stuffed full of partiers. It was quite the scene, even crazier than St. Patrick's Day in New York City!

When we were in The Hague, we toured the Binnenhof Parliament Complex, the seat of the Netherlands country government. Because it was a week of national holidays, the parliament wasn't meeting, so we couldn't see them in action. But, we had the rare opportunity to see the 13th century Ridderzaal (Hall of Knights), where the Dutch government presents its annual budget to the monarchy. Then in Bruges, we got to participate in their Labor Day (May 1st) holiday. We were in the top of the Belfort bell tower at 11 AM to hear the hourly carillon tune followed by the chiming of the hour by the biggest bell. Then to our surprise, because of the holiday, the huge bell kept on chiming and chiming for five to ten minutes! As we clattered down the stairs, the whole tower was vibrating and echoing with the sound. We spilled out into the street into the middle of a parade complete with a marching band. What fun! The next night we dined and drank in Café Vlissinghe, the oldest pub in Bruges (almost 500 years). We started talking to an American woman there who was celebrating her Birthday that day. We bought her a drink, and another American couple joined us, so the five of us had an impromptu party.

I highly recommend traveling to the Netherlands and Belgium. We found great places to stay from booking.com and found the local train, subway/tram, and bus systems fairly easy to figure out and cheap to use.