The fall colors were beautiful a few days ago. 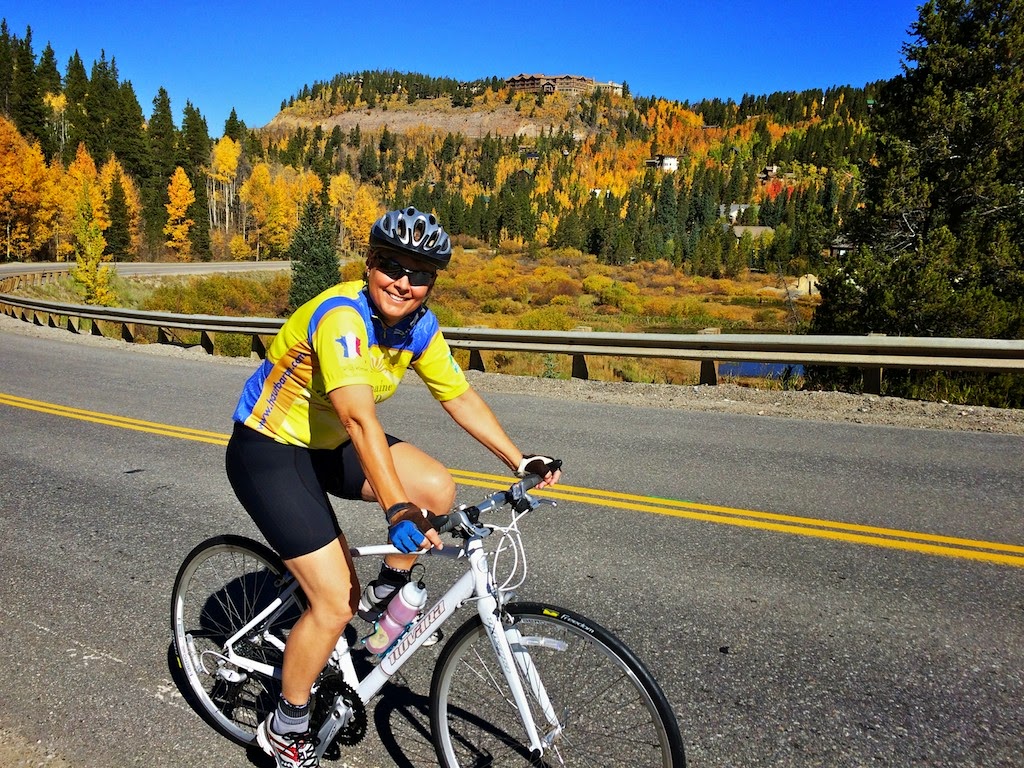 Posted by Beth Groundwater at 2:47 PM No comments:

Report on the Breckenridge Festival of Film

What a jam-packed weekend the Breckenridge Festival of Film put on last weekend! My husband and I had a blast, going our separate ways and meeting for parties. We wanted to see different films, and he was a Film Liaison volunteer, so he had to introduce his filmmakers' films. I, on the other hand, was interested in meeting as many Short Drama filmmakers as possible, to let them know I was responsible for selecting their films (as Short Drama lead on the Program Committee) and to tell them how much I enjoyed their films. 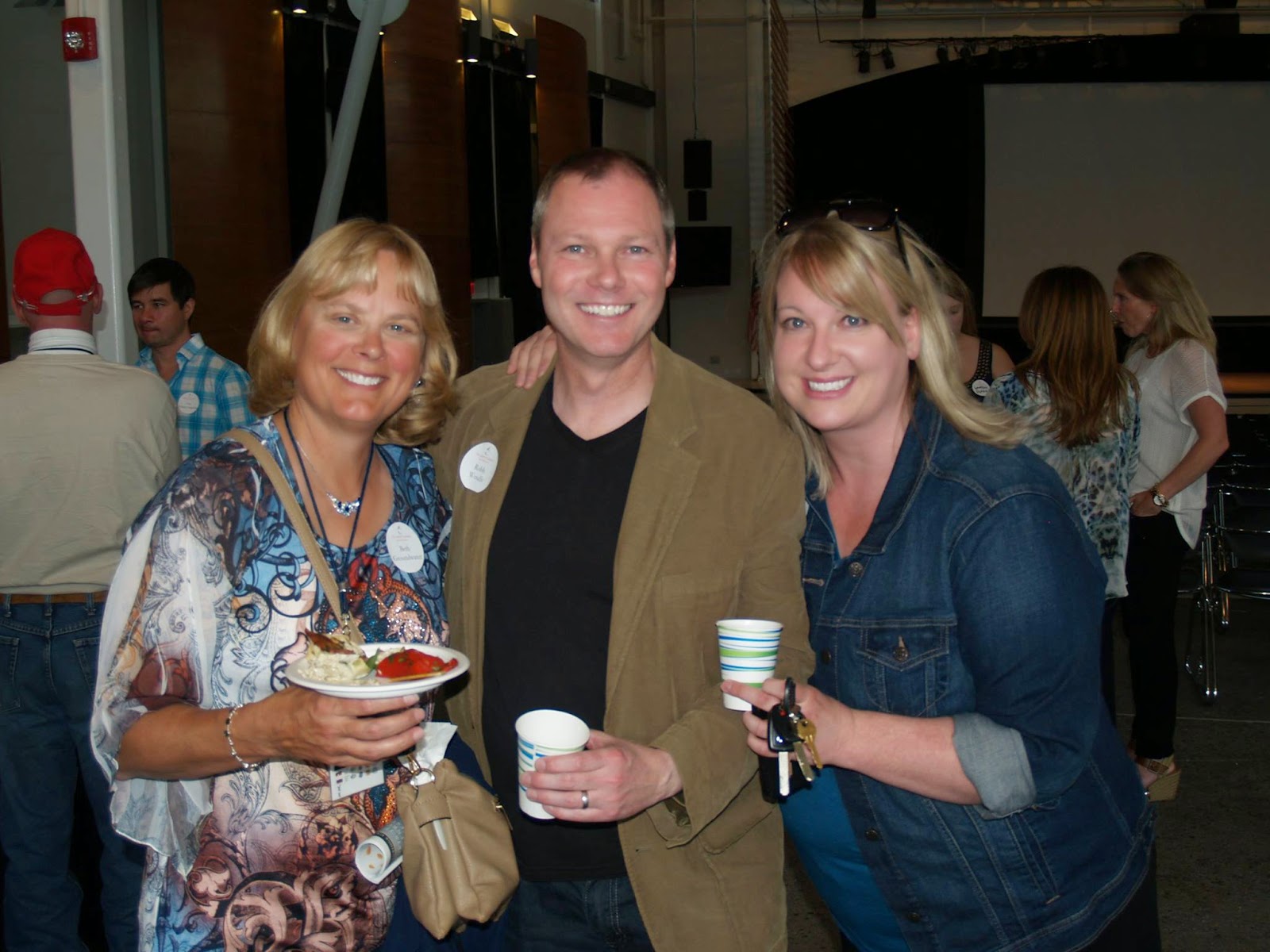 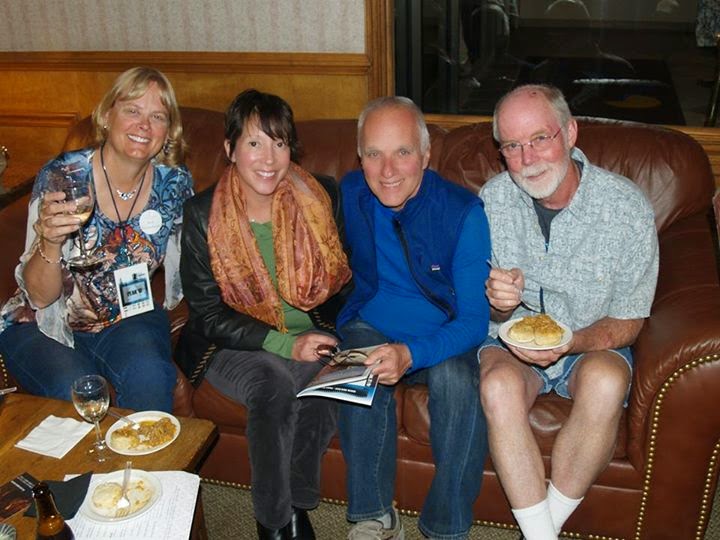 Friday, I went to see the High School films in the afternoon and was pleasantly surprised by the creativity shown by these young filmmakers. After the late afternoon Industry Party at Montana's Cantina, I watched the Adventure Reel of high-energy, outdoor action sports and exploration films, headlined by Roraima -- Climbers of the Lost World, then went to the late night Official After Party at Cecilia's Martini Bar and Nightclub.

Saturday afternoon, I sat through all three Filmmaker Forum panels of 8-9 filmmakers each, then chatted with those I wanted to meet after each panel. Then I watched a full-length slapstick comedy film set in Turkey, Dugan Dernek. After a quick sandwich at The Crown Cafe, I watched the second half of the Adventure Reel selections at the Riverwalk Center, headlined by Higher, an extreme backcountry snowboarding movie. Then I attended the Blue Stag Saloon Party to "come down" from the adrenaline high produced by the Adventure Reel. The photo below shows my husband and me with Town Council member Erin Gigliello at the party. 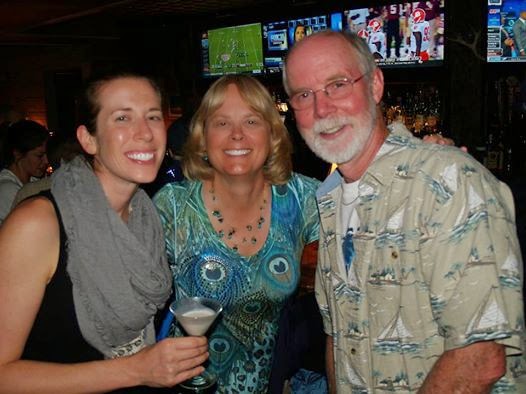 I spent Sunday running from one overlapping film to another, starting with Flying the Feathered Edge, a documentary of aviation legend Bob Hoover's life. I left before the final minutes of this excellent film to catch a showing of BFFs, a full-length comedy about two women friends going to a couples retreat. Then I ran over to a showing of Life Itself, a documentary about film critic Roger Ebert. I missed the first half hour of the film, but the rest was wonderful!

Hubby and I had a quick dinner at Rita's, then we watched the Awards Ceremony followed by Una Vida, the Closing Night film. It is a drama about Alzheimer's disease that is set in New Orleans. Finally, we went to the Wrap Party at the Blue River Bistro. The photo below shows us with other partiers, including the Emma movie filmmaker, an enthusiastic young man who starred in his film and won our Best Actor award. 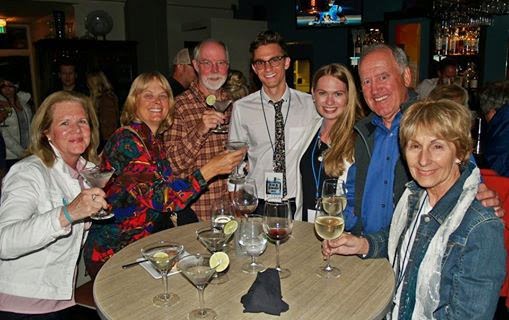 Posted by Beth Groundwater at 8:00 AM No comments:

In September, I was able to fit in two of my favorite local hikes near Breckenridge, CO--McCullough Gulch and Mohawk Lakes. Below is a photo of me (in the middle) with two hiking friends, showing lower Mohawk Lake in the background. 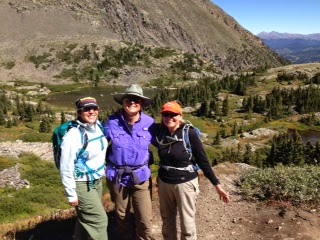 Last Wednesday, I had my last bike ride of the season with the No Name Group--last ride for them, but not for me. I hope to be riding through the end of the month. We biked from Frisco to Keystone and back, with lovely views of gold, peach, and rose-colored aspens under a blue, blue sky with temps in the sixties. A perfect day for riding! The photos below were taken by Dick Candlemo. 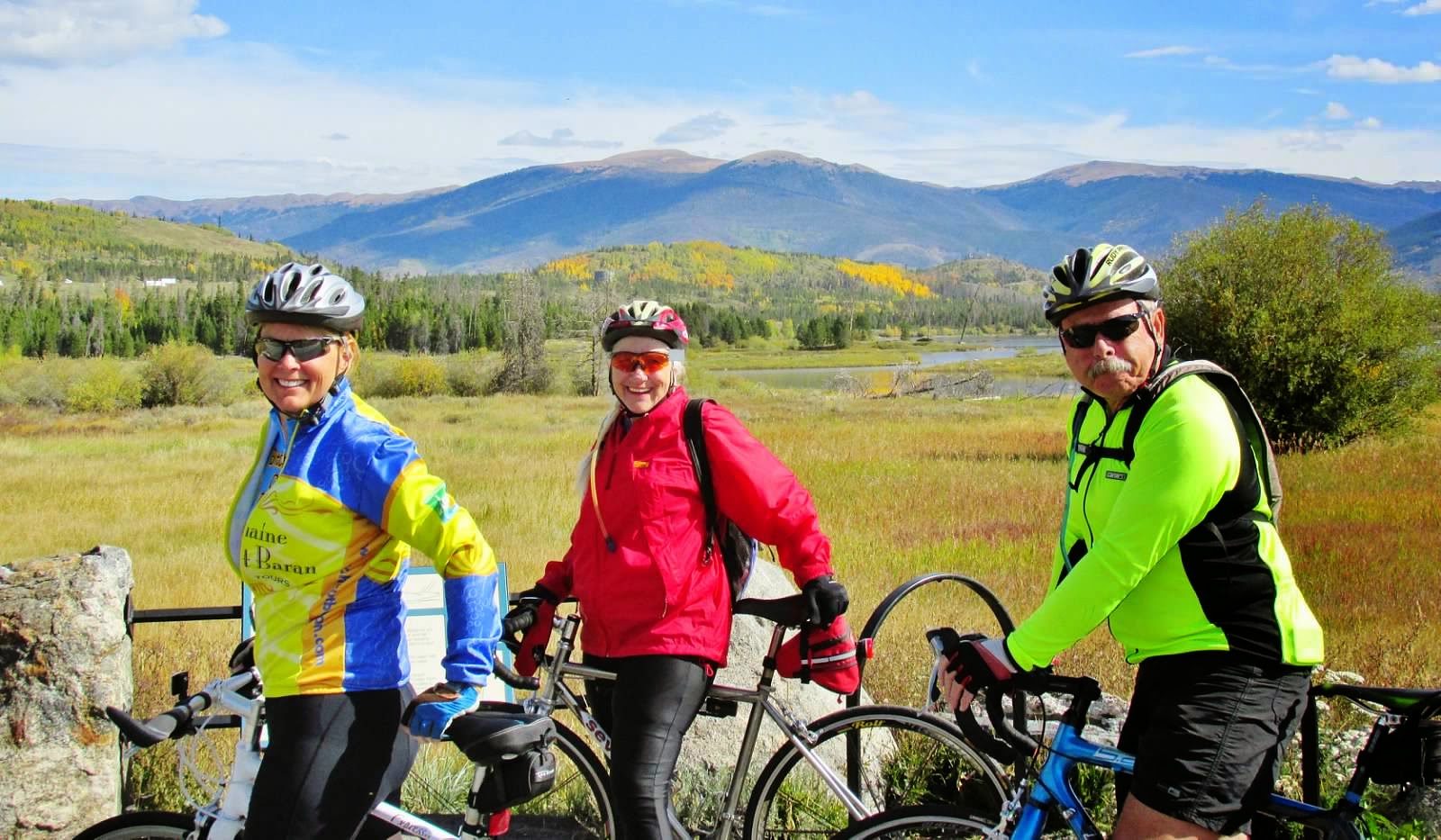 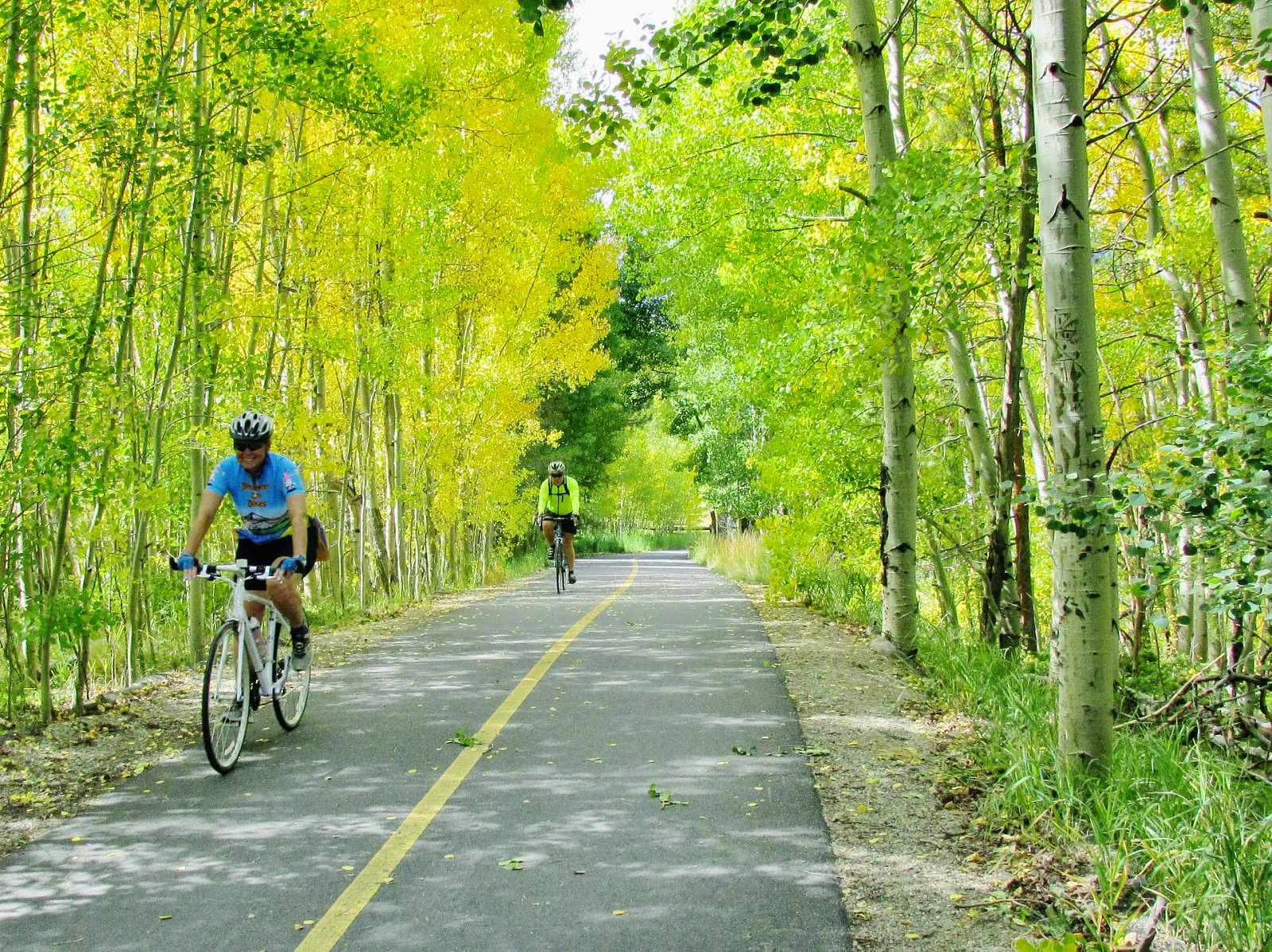 Last Thursday, my husband and I volunteered to be Hole-in-One judges for Fatty's Golf Tournament at the Breckenridge Golf Course. Fatty's is a local Italian restaurant that hosts an annual fun golf tournament that benefits a local charity. This year, the beneficiary was the National Repertory Orchestra. Since the NRO Director of Marketing and Development knows us as steadfast supporters and volunteers, she asked if we would be willing to be judges. We were happy to oblige, and since many of the teams were dressing in costume, we decided to wear our Viking horn hats that we had decorated for Breckenridge's annual winter Ullr Festival (Ullr is the Norse god of snow). You can see us at our posts below. 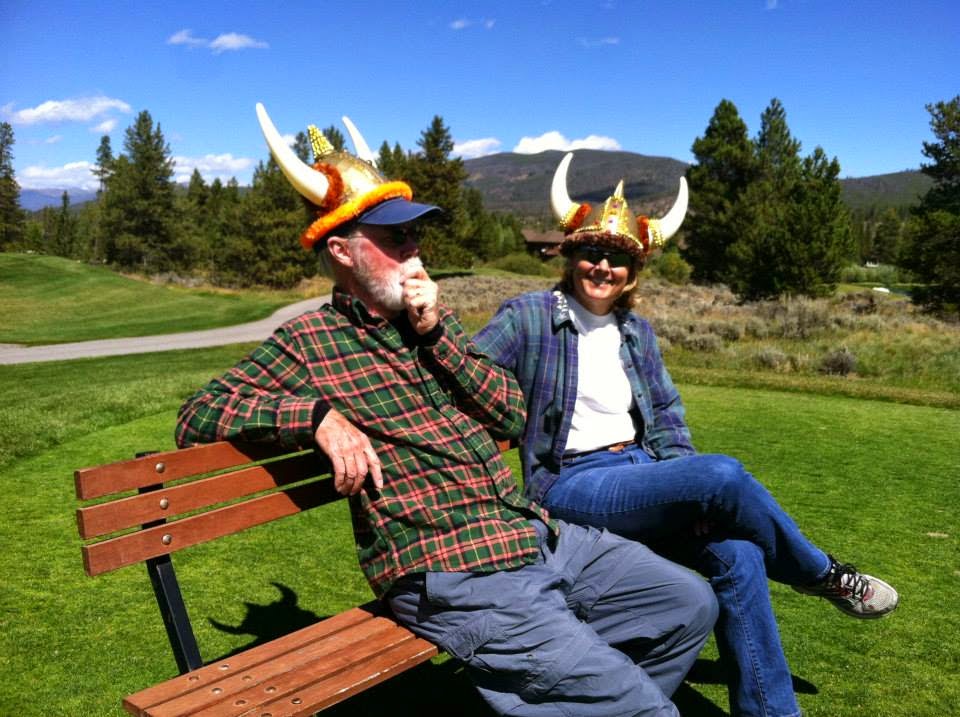 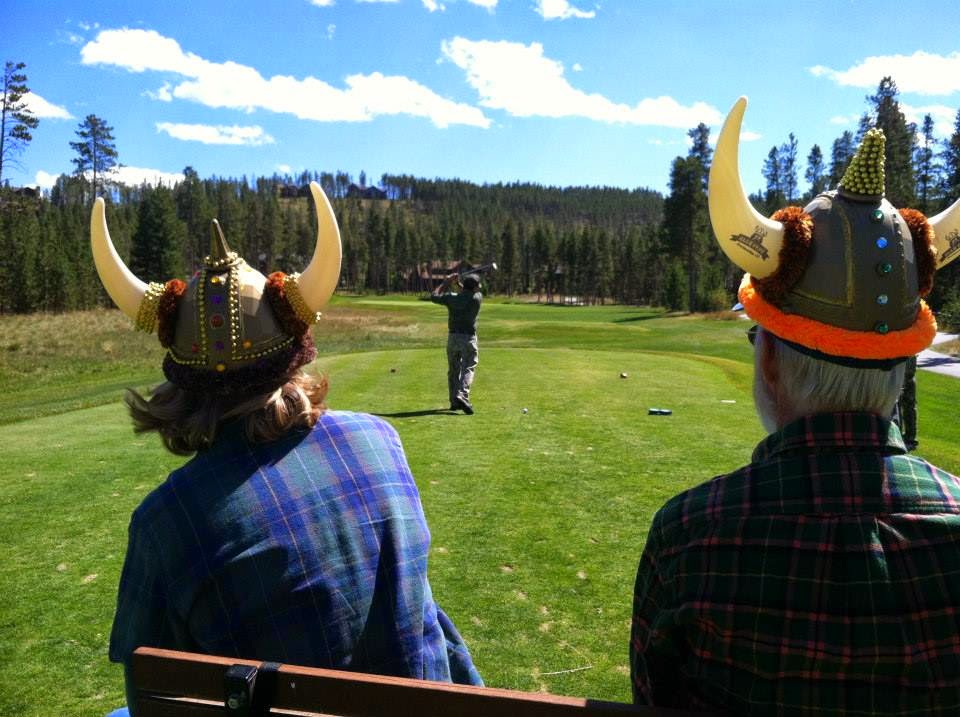 Then last Saturday was Summit County's Make A Difference Day. We celebrate it early, because in October, we're likely to have snow that would get in the way of accomplishing outdoor projects. My husband and I volunteered to do some trail building work with the Friends of the Breckenridge Trails. We worked on adding a new section to the ZL Trail to connect it to the Galena Ditch Trail. The photo below shows me taking a break from wielding such tools as a McLeod, a Pulaski, and a shovel to create the new trail. 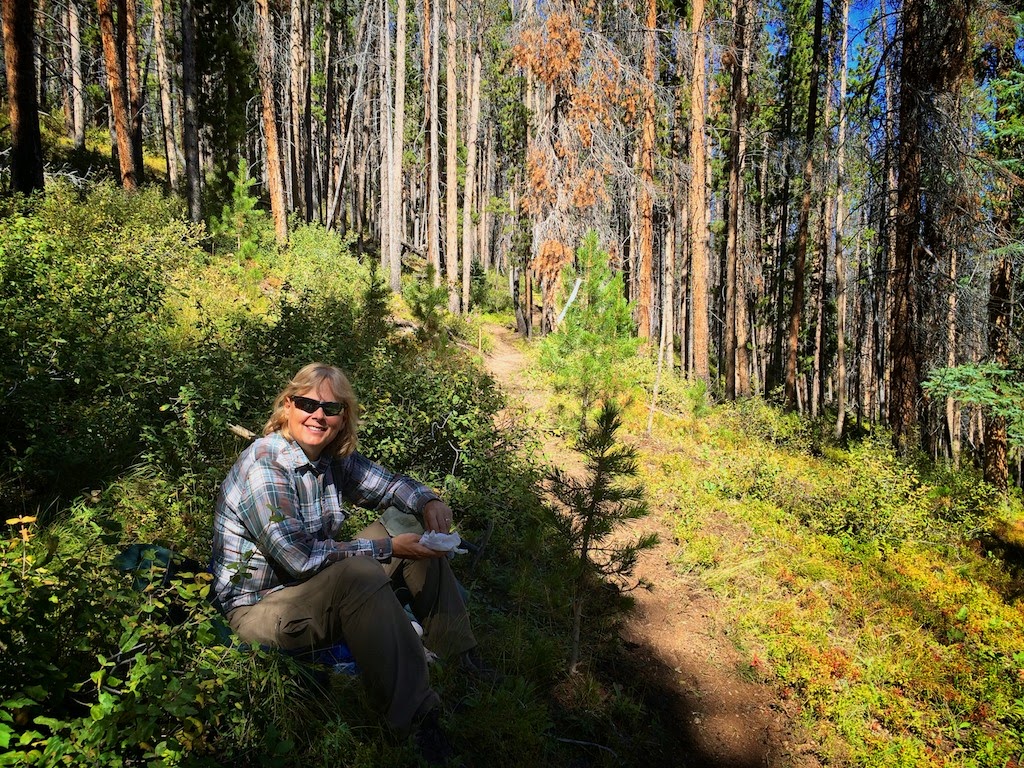 Posted by Beth Groundwater at 10:23 PM No comments:

Not all hikes are for viewing wildflowers ...

... as shown in this photo of a Summit County Senior Center "Walkie Talkies" hike to the Mountain Pride mine site near Breckenridge, CO, which includes seven buildings other than the mine itself (behind the group), a couple of graves, and a tin can midden. 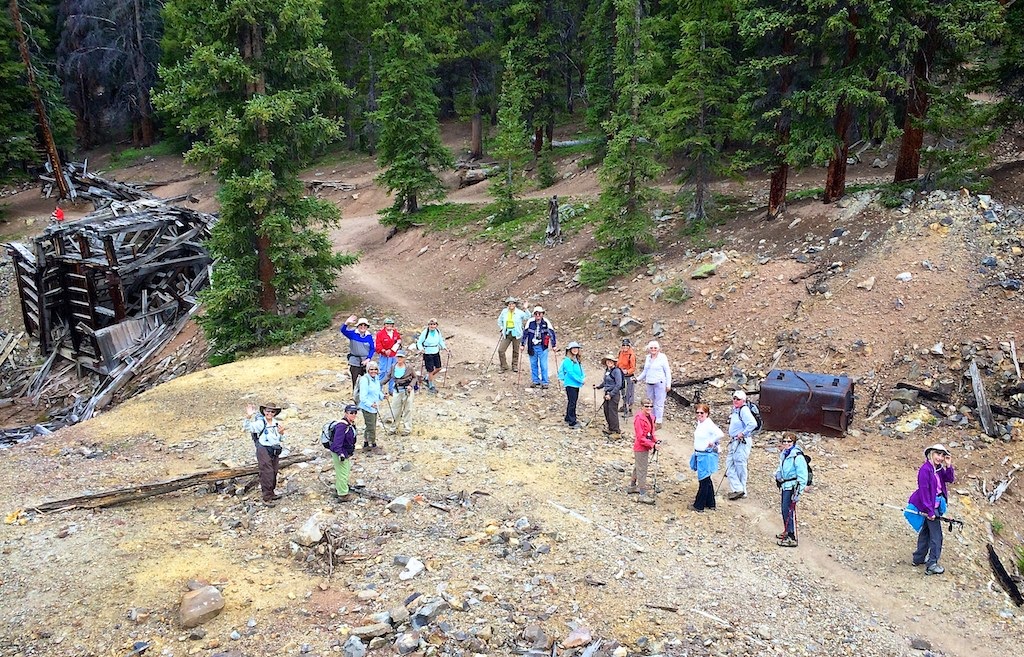