Awakening after an Editing Deadline

On Sunday, January 13th, Denise Dietz, my editor at Tekno Books, sent me my edited manuscript of TO HELL IN A HANDBASKET and her critique to review. She also sent a request for ancillary materials, including bio, cover copy, back cover quotes, catalog copy, headshot, etc. Usually, I've been given two weeks, maybe three, to respond to these requests from my regular editor or copy editor, and this was no exception. So, my butt's been in the chair a LOT these last two weeks.

I reread the whole manuscript, accepting Deni's changes, for the most part, and doing some tightening, esp. in areas she marked where the pacing slowed down. I also had to contact the Breckenridge Nordic Center, where I set a snowshoeing scene. I'd done the research for this book two and a half years ago, and in that time, some of the trails had changed and the center built a new shelter. That changed the timing on that scene some. Also, I asked the Undersheriff of the Summit County Sheriff's Department to review 27 pages for me and address some technical questions I had. And, I thought long and hard about the problems that Deni brought up in the manuscript and how I could solve them.

I finished preparing the written ancillary materials last night, and I finally finished all the changes to the manuscript this morning. My husband and I hope to get a good headshot when we visit Breckenridge this weekend, and I'm still waiting for the Undersheriff's feedback, but other than that, I'm done! Now, I've put my head up and realized there's laundry and shoppng to be done, PPW programs to be planned, a Left Coast Crime hospitality suite waiting for me to solicit food donations for, etc. etc. Back to reality!
Posted by Beth Groundwater at 4:10 PM No comments:

In October, 2007, Amazon initiated their Breakthrough Novel Award contest by soliciting 5000 unpublished novel-length manuscript submissions from writers. The winning manuscript will be published by Penguin with a $25,000 advance against royalties. The submittal pool was narrowed down to 836 semi-finalist manuscripts on January 15th. The first 5000 words of all of these manuscripts are posted at http://www.amazon.com/abna and are available for free download.

Amazon is asking customers to post reviews for those entries they read and is offering prizes to reviewers for the most and highest quality reviews. The entries will also be reviewed by Publishers Weekly. By March 3rd, Penguin editors will select ten finalists and Amazon customers will choose the winning novel.

I am one of many Pikes Peak Writers members who have made it into the semi-finalist round. The whole board of the organization is very proud that we have so many members represented. I hope you'll read and review them all. The entries can be found at:

My VIRTUAL DEATH entry was the first novel-length manuscript I wrote, and it has been extensively revised many times, but needless to say, it never sold. It's very different from my cozy mysteries, being a futuristic romantic suspense. It has some fairly racy bits further on. I'd appreciate it very much if you could take a gander, and if you like it, write a review. If you don't like it, that's fine, too. Just don't bother writing a review. ;)
Posted by Beth Groundwater at 4:53 PM No comments:

Yesterday, the Rocky Mountain chapter of Sisters in Crime held a Mock Coroner's Inquest. Donnell Bell, the program chair, and Christine Herndon, the El Paso County Deputy Coroner, designed a case scenario and recruited chapter members to play the various witnesses. I was Ruthie Guyless, the first responding police officer, who investigated the death scene, took evidence, and questioned witnesses. Others included Amelia Onlooker, the reporting party, Racine Sharastak, the coroner investigator, Clara de Colon, the pathologist, William Love Levam, the deceased's ex-husband, and Therma Dorr, the victim's roommate. A jury of six was selected from audience members and Ms. Herndon, as the judge, began the inquest to determine the cause of death of the deceased. The officials who investigated the case concluded suicide, but the deceased's mother and the P.I. she hired made a case for homicide.

All of the actors really got into their roles, and many, esp. the roommate (an erotica romance author in real life), who turned out to be a porn star and the deceased's Lesbian lover, had the audience howling in laughter, clutching their stomachs and wiping their eyes. Many suspicious aspects of the case were revealed: the gun that the deceased supposedly used to kill herself belonged to the ex-husband who was cashing in on a large insurance policy, the deceased used illegal drugs and had an anti-depressant prescription from her psychiatrist, the deceased and the roommate had fought the night before because the deceased was going to leave and return to her ex-husband, and the P.I. found the spent shell casing days later that came from a second bullet embedded in a wound on the deceased which was not revealed until the autopsy, and more. The audience was fascinated as the case slowly unraveled.

The whole thing was done with no script and no rehearsals, just a scenario, some character profiles that the actors developed for themselves, instructions from Ms. Herndon as to what kinds of questions she would ask each witness, some technical data she provided, such as a fake autopsy report, toxicology report, and drug paraphernalia evidence, and a lot of ad-libbing. It's been a long time since I've had so much fun!
Posted by Beth Groundwater at 7:11 AM No comments: 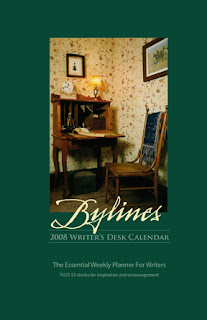 I just got word that this weekly inspirational planner put together by Bylines Magazine is out and available for purchase. I have an entry in the planner. According to the editor, Sylvia Forbes:

"The cover photo is the desk of Laura Ingalls Wilder, who wrote all her books using this desk. The desk is located at the Laura Ingalls Wilder Historic Home & Museum in . The home is furnished as Laura lived in it. The planner has stories by 53 writers who come from 24 US states and 5 other countries. Almost every type of writer is represented, from mystery writers to essayists, newspaper reporters to humorists, children's writers to a poet."

My entry appears in the week of March 9-15, and is about how important it is to network with other writers. So, instead of sending in a photo of myself, I sent in a photo of a group signing I did with fellow authors, Mike Befeler, Linda Berry, and Pat Stoltey. I'm looking forward to reading weekly inspirational messages from all those other writers!

Posted by Beth Groundwater at 1:52 PM No comments:

An Interview in Mysterical-E

The Winter 2007-2008 issue of the Mysterical-E ezine has a great cover! Check it out at http://www.mystericale.com/. Then, click on the cover and peruse the contents. There's quite a selection of short stories, many written by fellow members of the Short Mystery Fiction Society and Sisters in Crime. Great reading!

If you continue to page down, you'll see a list of author interviews. I'm listed just above my editor, Denise Dietz. I'm thrilled to have my interview included with hers. Please take a gander at my interview and let me know what you think. Joe De Marco, the editor of Mysterical-E, had some tough questions that made me think.
Posted by Beth Groundwater at 4:40 PM No comments:

I want to wish you all a Happy New Year! I hope 2008 brings to you all everything you're hoping for! Speaking of which, just before the New Year, I got what I was hoping for...

On December 29th, I signed the contract with Tekno Books for the sequel to A REAL BASKET CASE, titled TO HELL IN A HANDBASKET. It should be published sometime in the first half of 2009. TO HELL IN A HANDBASKET takes place in Breckenridge, CO. Claire Hanover, gift basket designer, and her family's ski vacation goes to hell in a handbasket when the sister of her daughter's boyfriend is killed on the ski slope. I had a lot of fun researching the book, which includes scenes involving snowshoeing, riding snowmobiles, and a high speed car chase down I-70.
Posted by Beth Groundwater at 10:16 AM No comments: