Last Friday, I hiked Black Powder Pass with my "Women With Altitude" group. Member Linda Carr shared some of the beautiful photos she took that morning, and I'll share a couple with you below. The trail is a 3 1/2 mile up-and-back, with about 700' elevation gain. It starts at the old railroad section house at the top of Boreas Pass near Breckenridge, Colorado, and follows a stream drainage ditch to the saddle between Boreas Mt. and Mt. Baldy that overlooks South Park County. In the photos below, I'm in front of the group, wearing a light green cowboyish hat. The photos don't do justice to the multitude of wildflowers along the way, but they show some of the views we enjoyed. 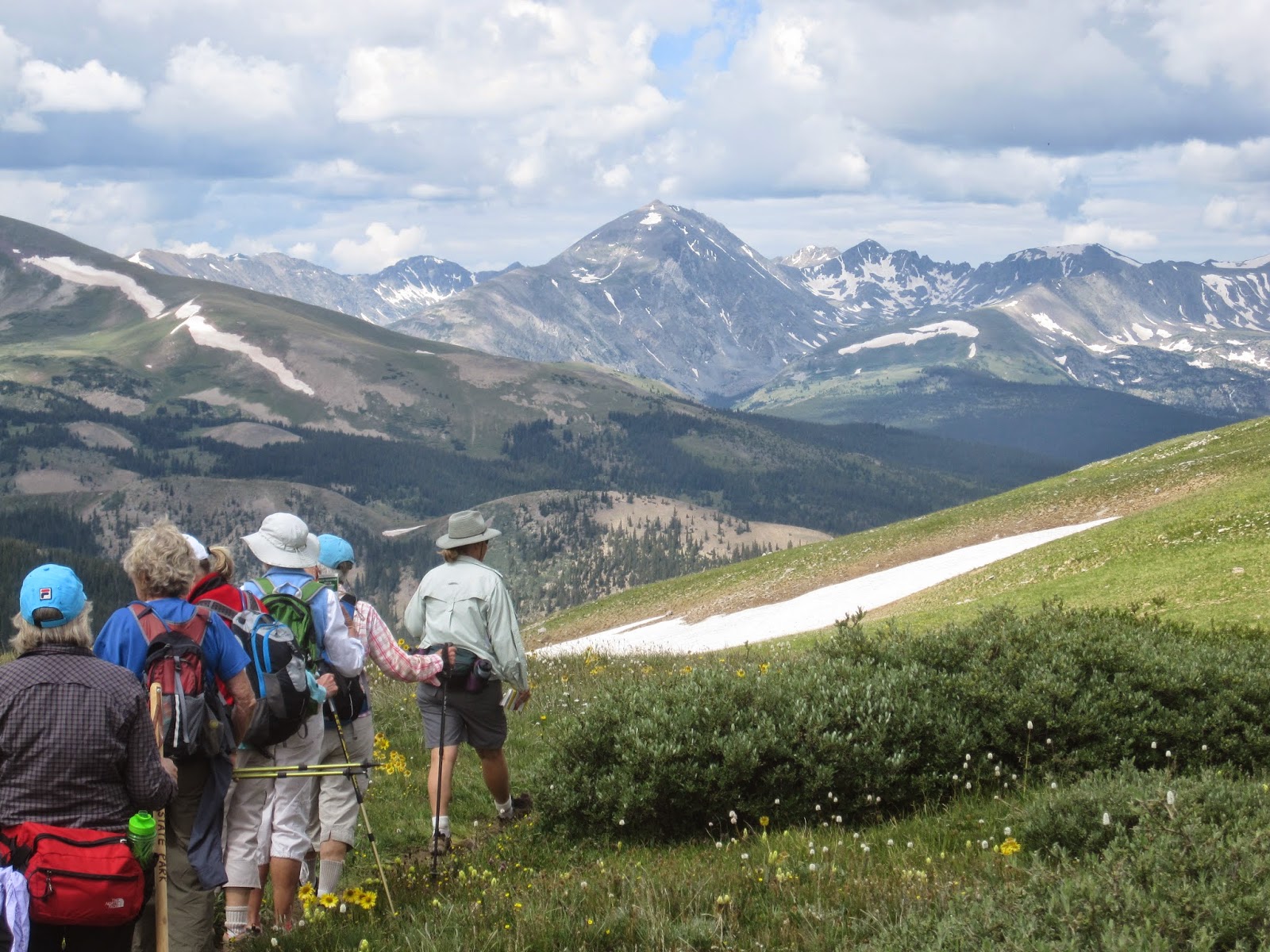 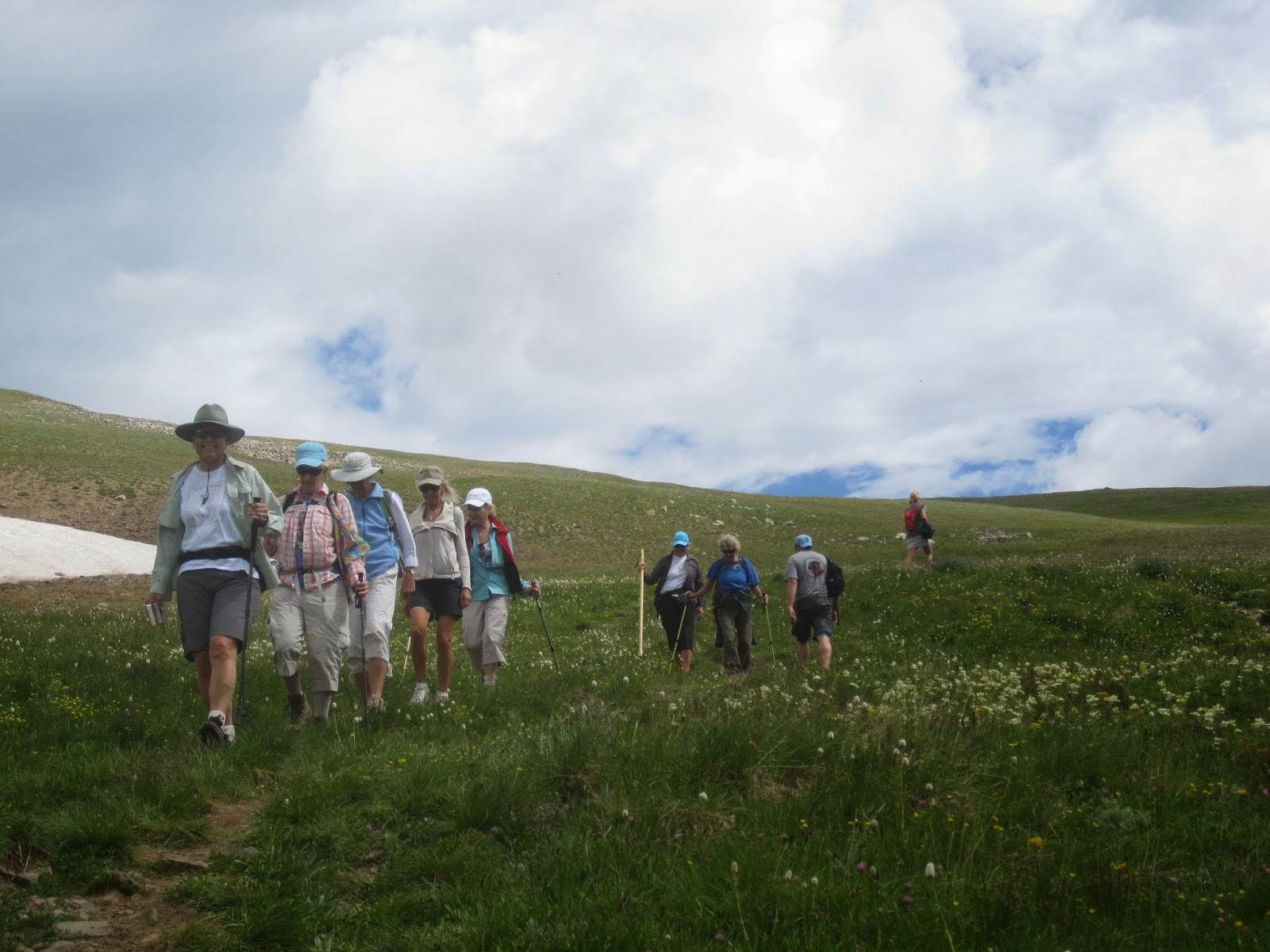 Posted by Beth Groundwater at 10:33 AM 2 comments:

Last Saturday, I went with a group of lady friends from Summit County to Georgetown, Colorado, to take the Historic Georgetown "Brides, Bells, and Barons" tour of fine homes and historic sites there. Georgetown has over 200 Victorian buildings remaining from its silver mining heydays, and the town is very active in preserving and presenting these properties to appreciative tourists. Some of the sites I visited are shown below.

The first photo is of "The Bride's House" in which fellow Colorado author Sandra Dallas lives, and where she signed copies of her latest book release by the same name. The Gothic Revival home was lovingly restored inside. 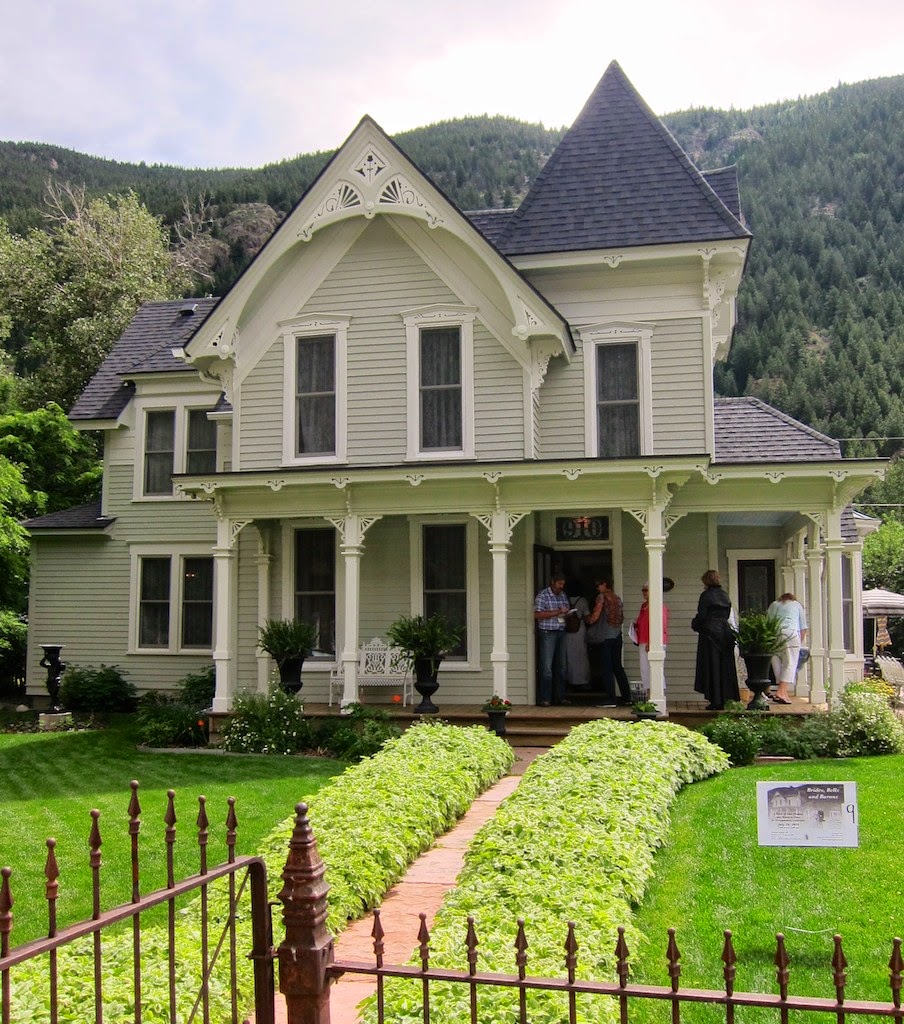 The second photo is of the Church House, designed by Robert Roeschlaub, Colorado's first trained architect, and built in 1877. 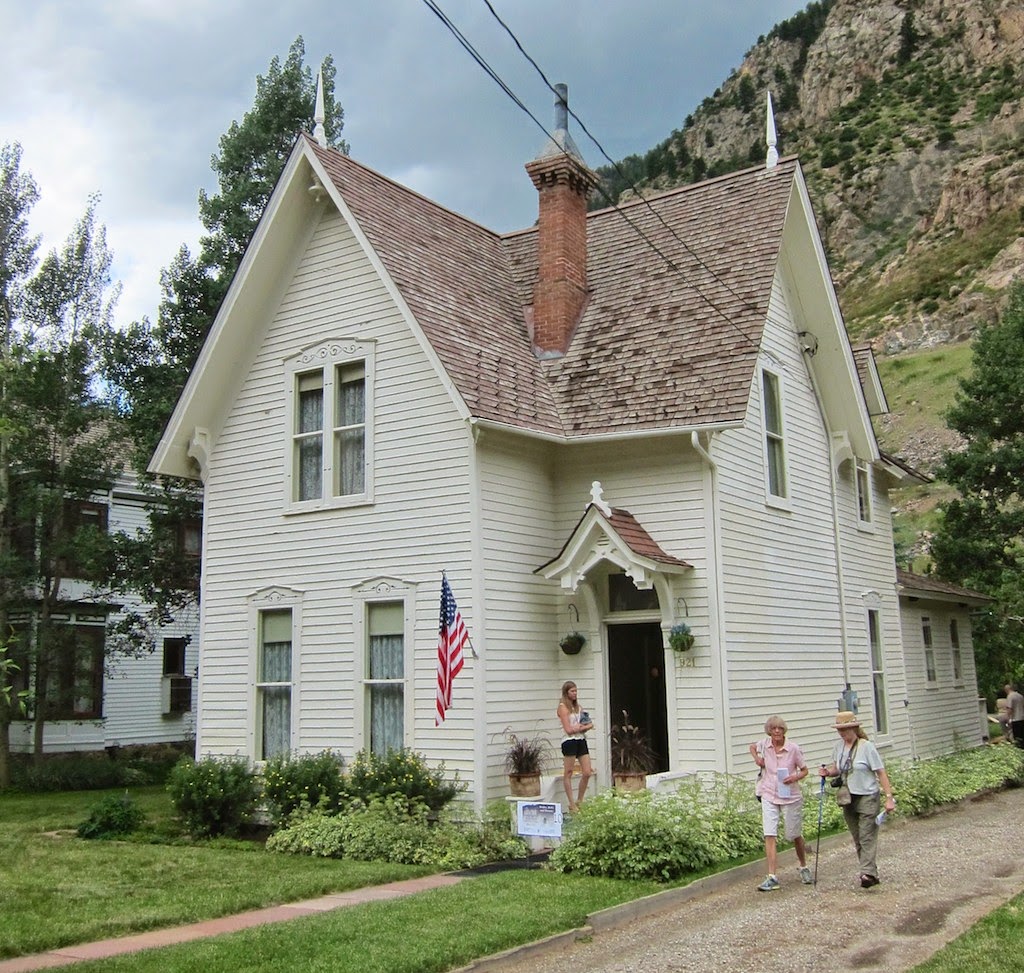 The third photo is of Hotel de Paris, built in 1875 by Frenchman Louis Dupuy as a luxury hotel with steam heat, gas lights, and hot and cold running water. Currently run as a museum, almost all of the original room decorations, furnishings, and fixtures are still in place. I especially enjoyed the kitchen, complete with a photo of the Chinese cook who toiled there. 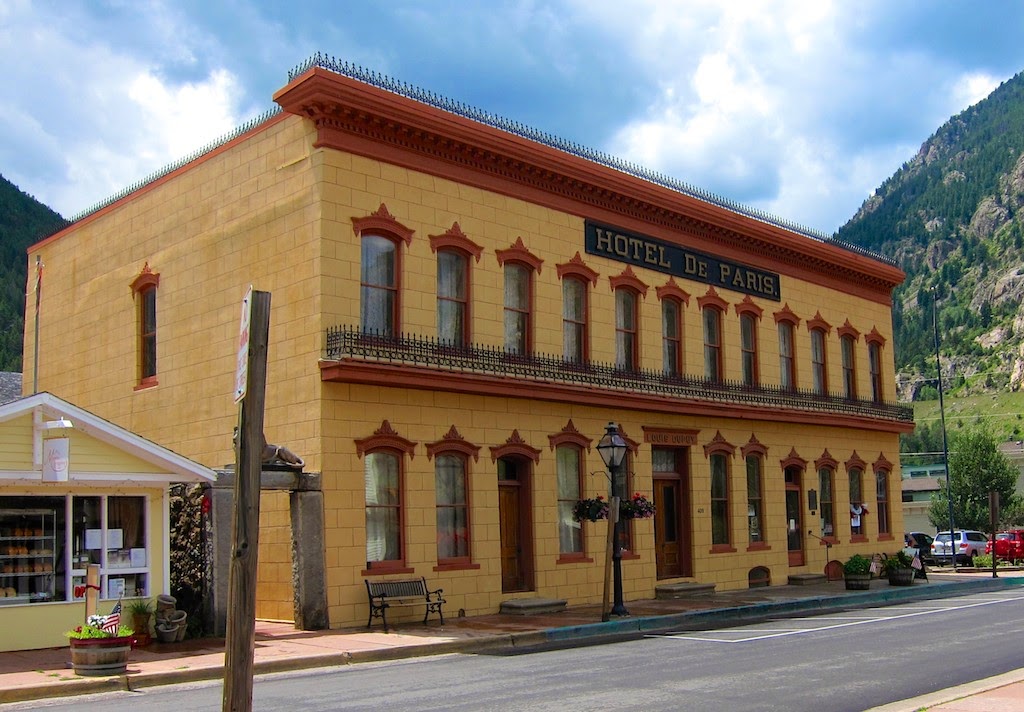 The next two photos are from the Georgetown Energy Museum, a still-functioning hydroelectric power plant built in 1900. It has a fascinating collection of ancient electrical appliances and old photos of workers in snowshoes placing and maintaining electric cables over mountain passes in the wintertime. 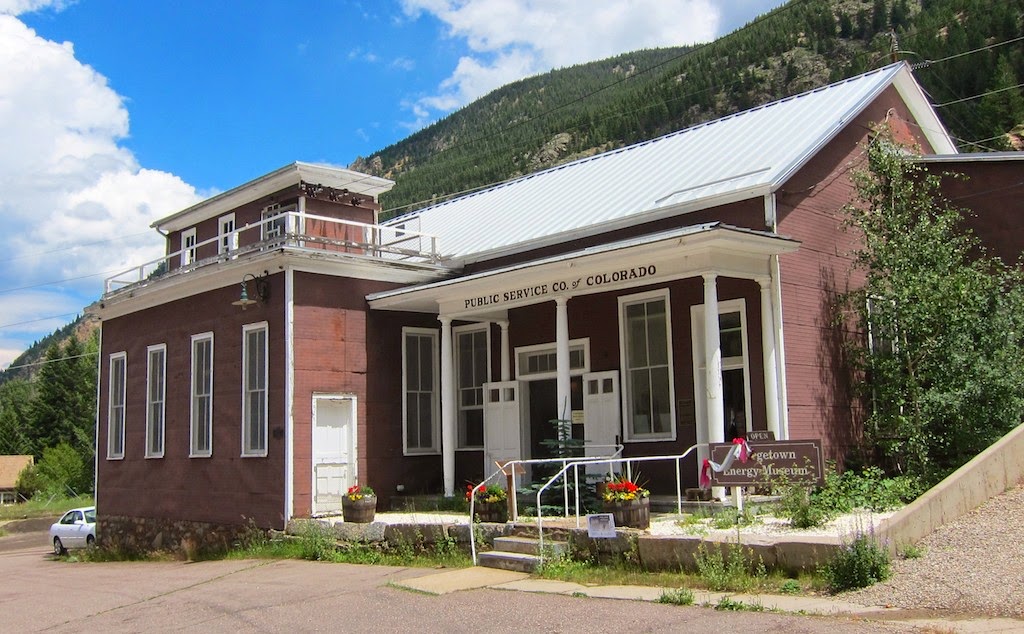 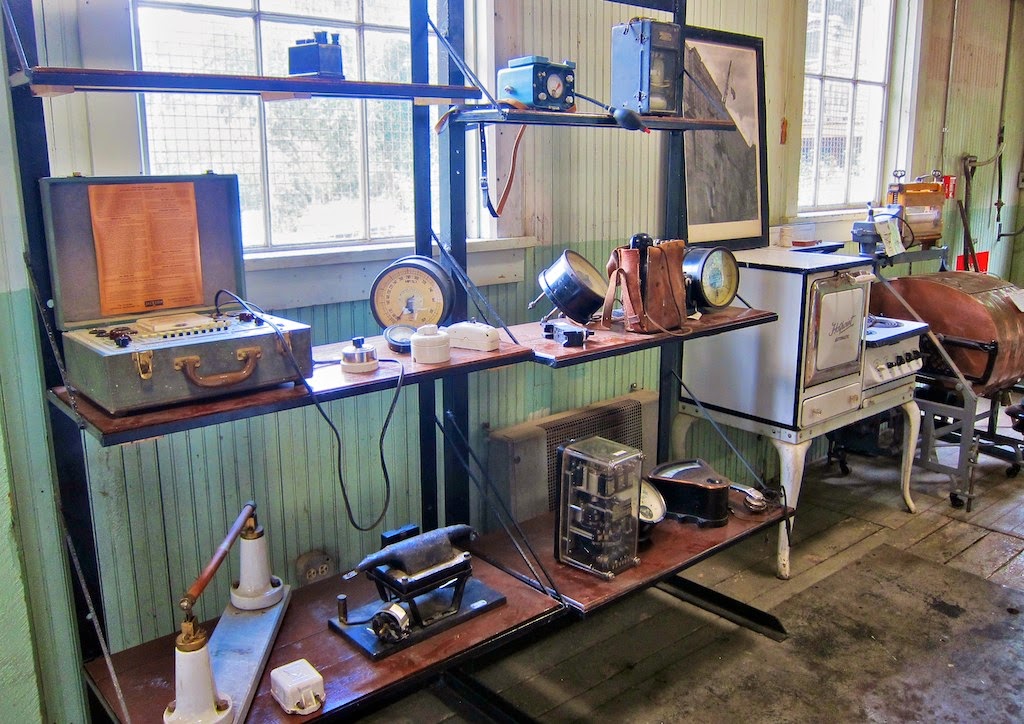 The photo below is of Colorado's oldest operational pipe organ (1877) in the Grace Episcopal Church. It is still played every Sunday morning for church service. 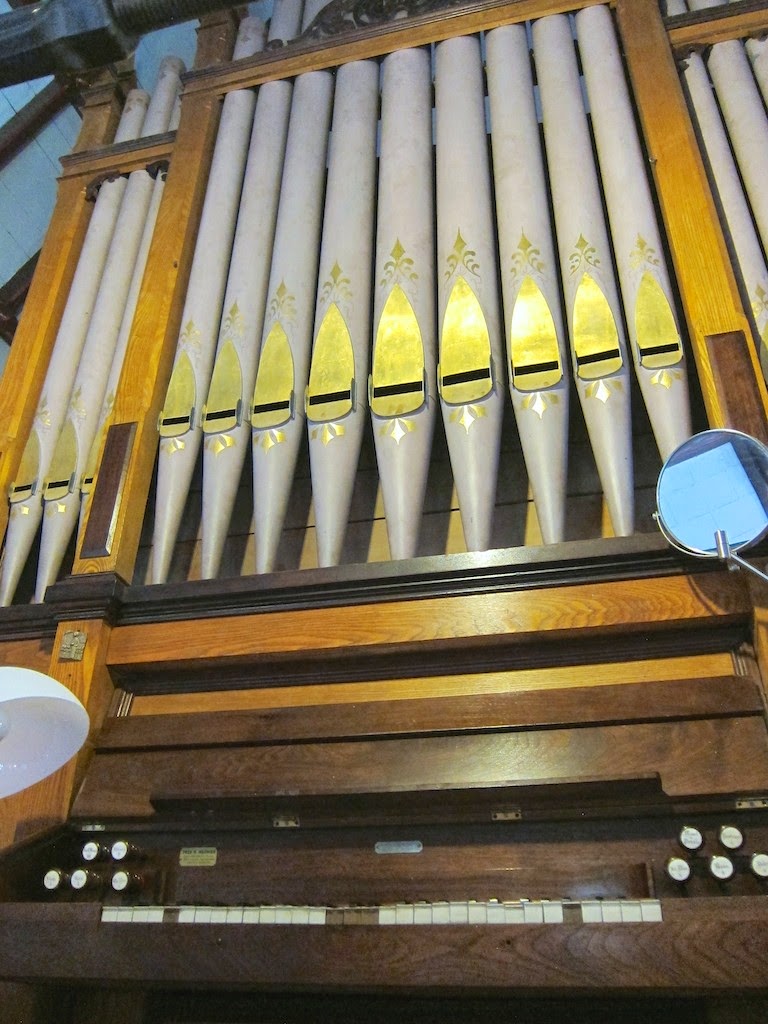 The next photo of a fireman's uniform is from the Alpine Hose No. 2 Firehouse and Tower, built in 1875. I also enjoyed the silver trophy case and the photos of the strapping young men who pulled fire carts in firehouse races that were hotly contested in Colorado at the time. 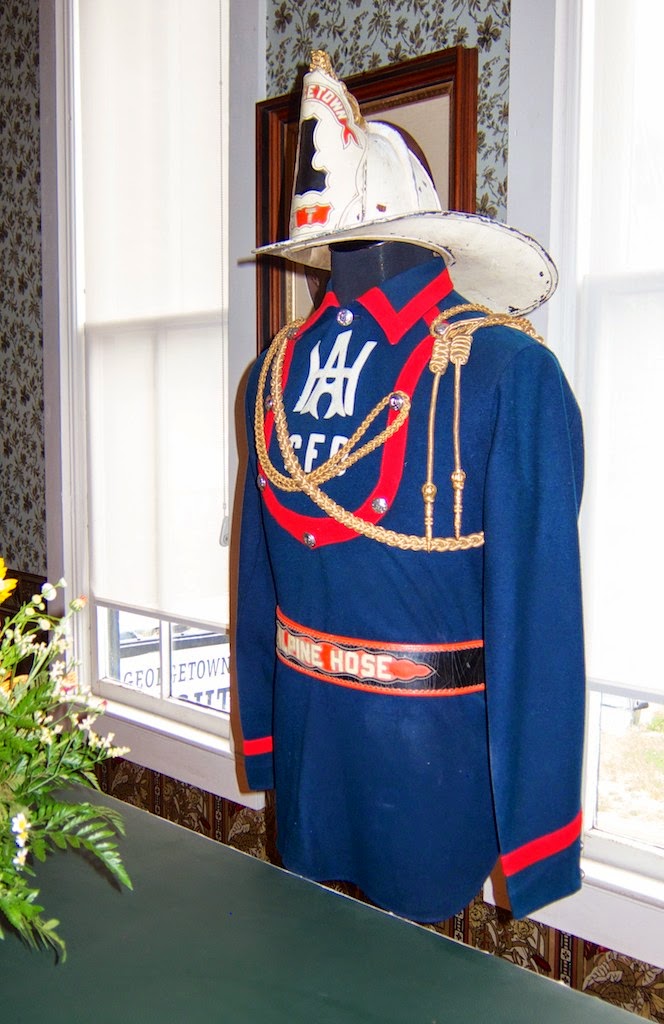 The next photo is of the Cornish House, which was run as a beautifully appointed B&B until very recently. It is now for sale. 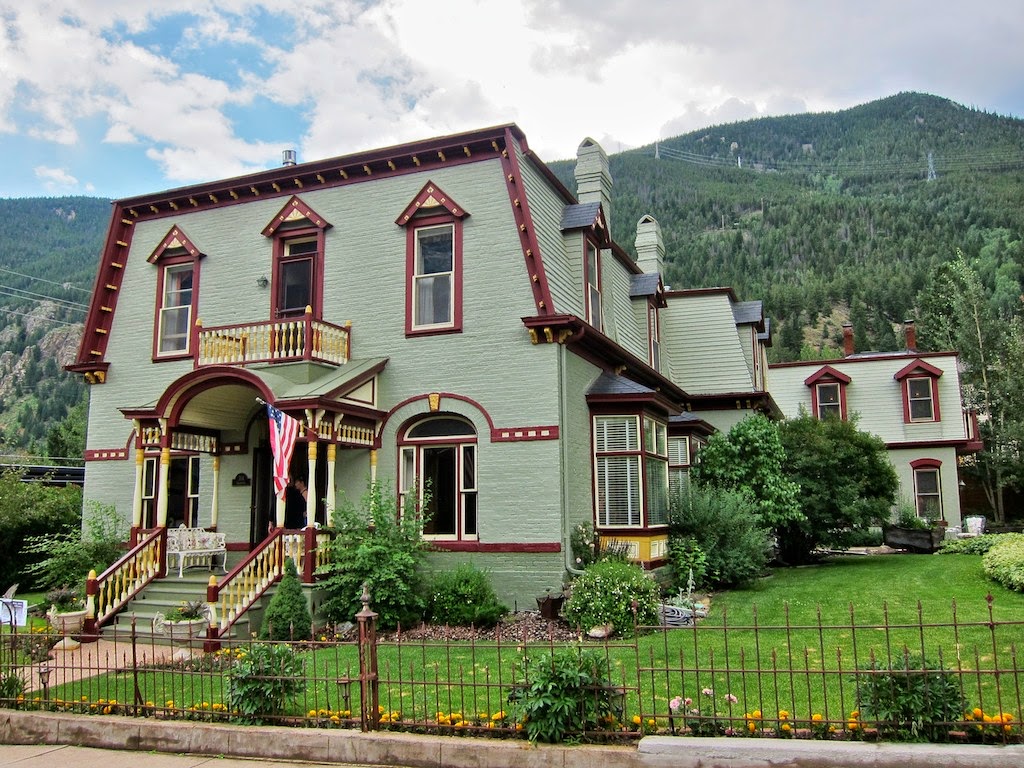 To finish off the day, our group gathered at the Dusty Rose Tea Room for a delicious Victorian-style tea. The tea room includes a wall of hats that patrons can don for photos and to "get in the mood" while dining. We took full advantage of them, as you can see in the next to last photo. The last photo shows my "Afternoon Tea" plate, with the deviled egg quarters and one cucumber sandwich missing that I had already eaten. :) What a fun day! 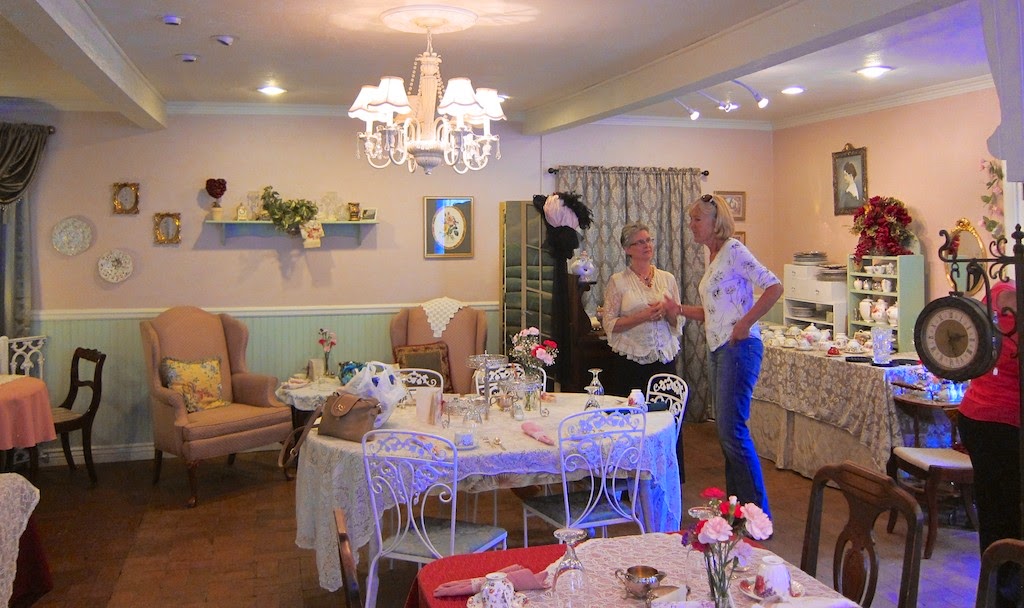 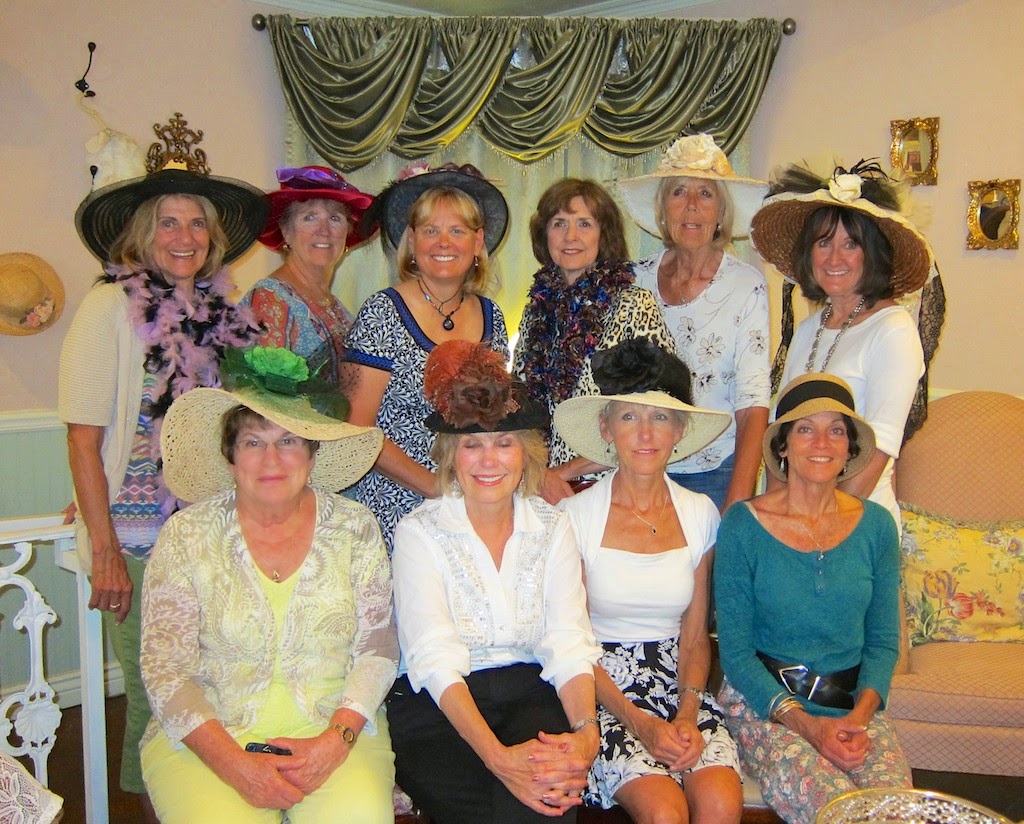 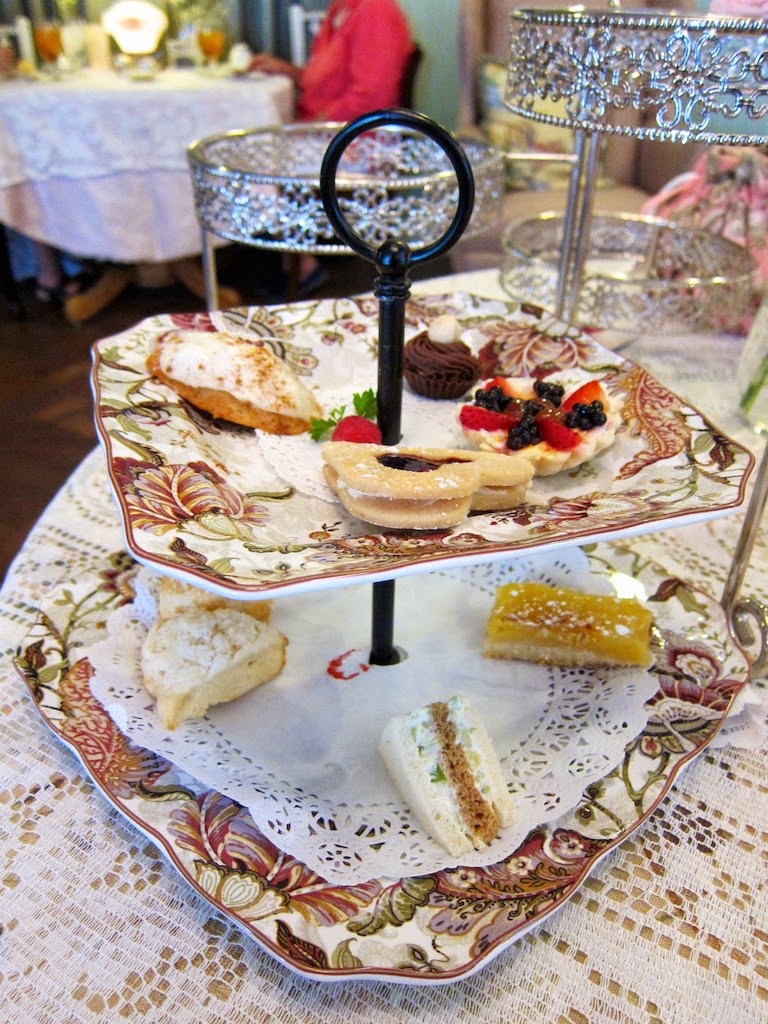 Posted by Beth Groundwater at 9:00 AM 2 comments:

My husband Neil and I have a longstanding interest in encouraging children to read and write and to mess around with science. When we lived in Colorado Springs, for instance, I occasionally met with the teen writing group at the local library to pass on information, such as how to write a query letter, and to help them critique each other's writing. Also, Neil was a volunteer science fair judge. So, when the Summit County Library System initiated it's "Fizz Boom Read!!" summer reading program this year to encourage children to both read and explore science, we were happy to sign up as volunteers. On July 9th, we manned two of ten science stations at the Frisco library that engaged children in experiments with air pressure.

You can see a lot of photos from that day HERE, but I borrowed a few photos from the site that featured Neil or myself to share with my blog readers. In the first photo below, two smart young gals who previously had manned the marshmallow experiment station at another library location are explaining to me how the experiment works while I read the instructions. In the second photo, we're running the experiment with some excited kids (notice the plunger for demonstrating a vacuum). So, what do you think happens to a marshmallow inside of a bell jar as you remove the air around it with a vacuum pump? 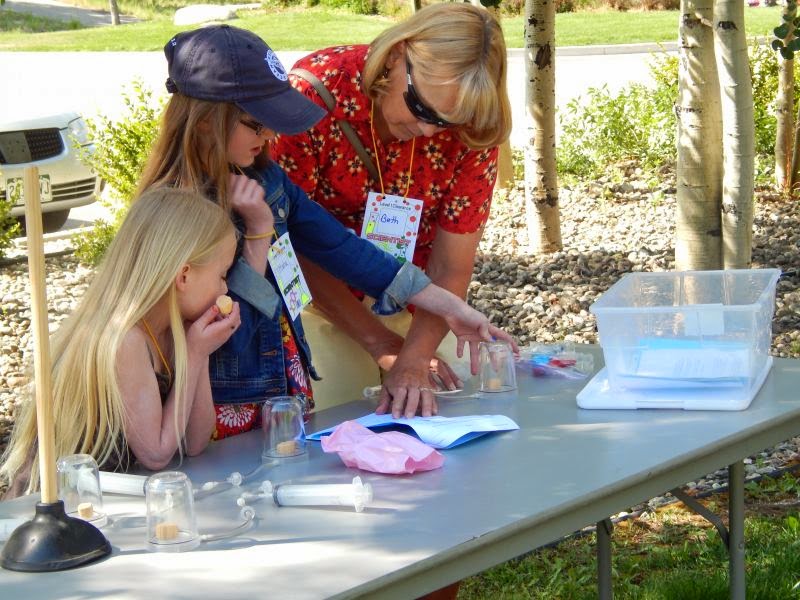 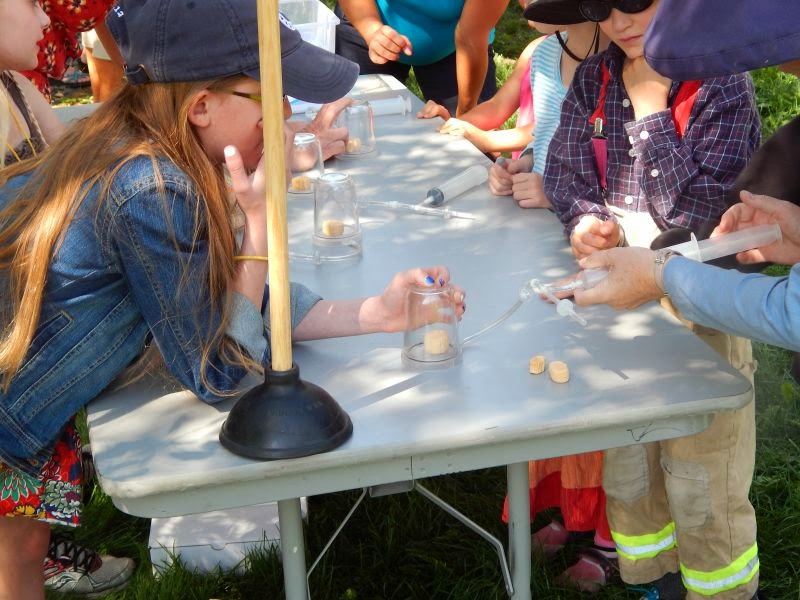 Below are two photos of Neil working at the "Balloon Zipline" experiment station. You blew up a balloon, fastened it to a straw on a line, then released the air from the balloon and let go of it to see if the force of the air leaving the balloon would propel it along the line. 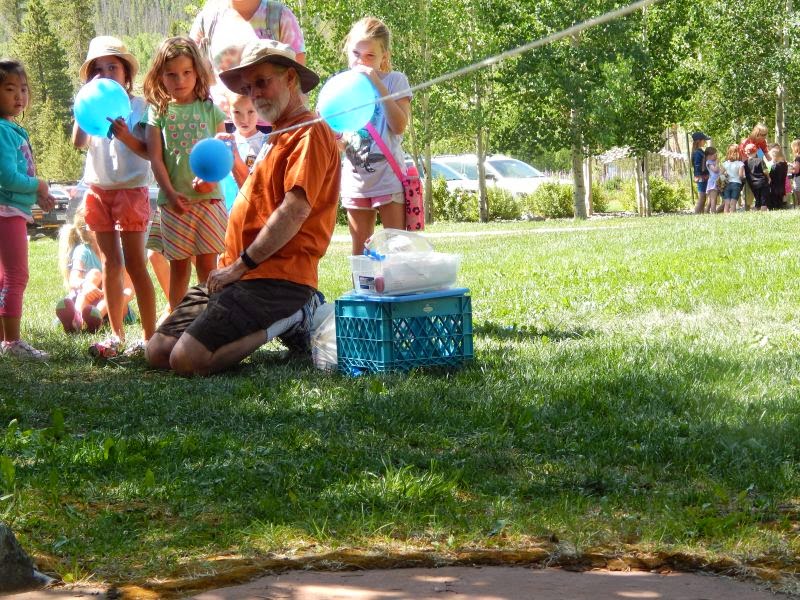 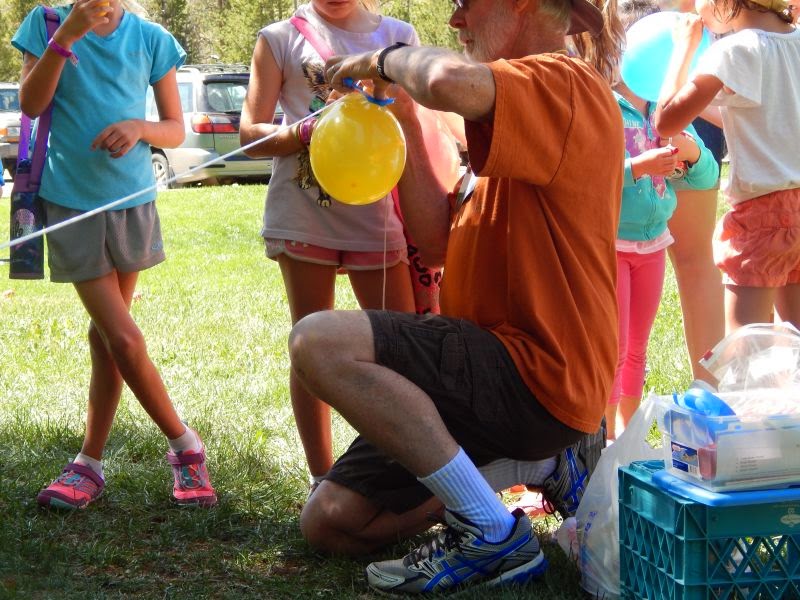 It was a fun day for us, and I hope the kids learned some things from the hands-on experimentation!
Posted by Beth Groundwater at 1:58 PM No comments:

Hiking and Biking in Summit County, Colorado in July

I am so lucky to be able to live in Summit County, Colorado! Other people save up their money to spend vacations here, while I get to enjoy the outdoor recreation opportunities here year-round.

On Tuesday this week, I hiked with the SOB's (Summit Older Bushwackers) to Booth Falls in East Vail. The hike was a workout--1400 feet altitude gain and 4.6 miles round trip, but the falls were spectacular, as was the rest of the scenery. See the two photos below: 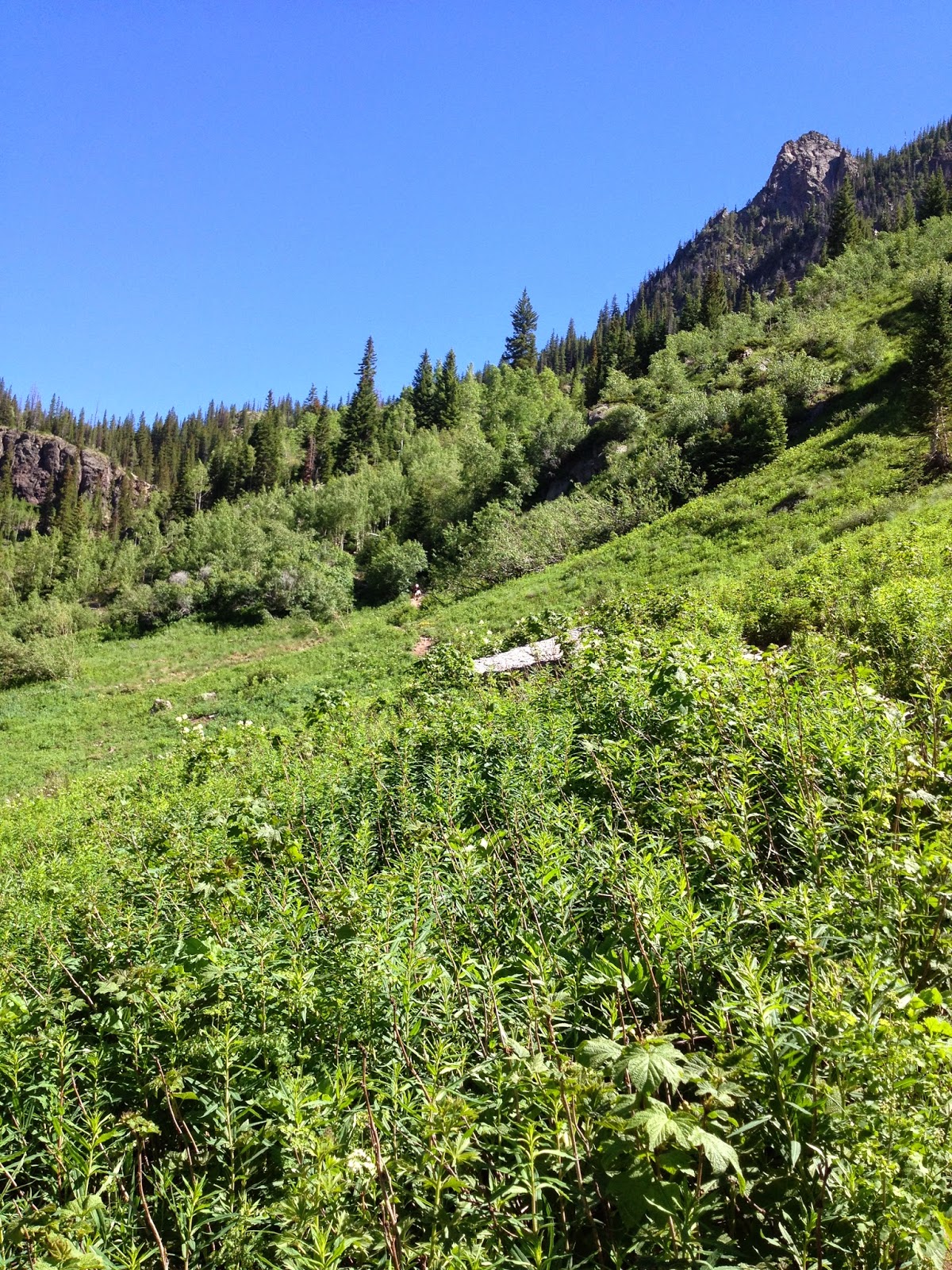 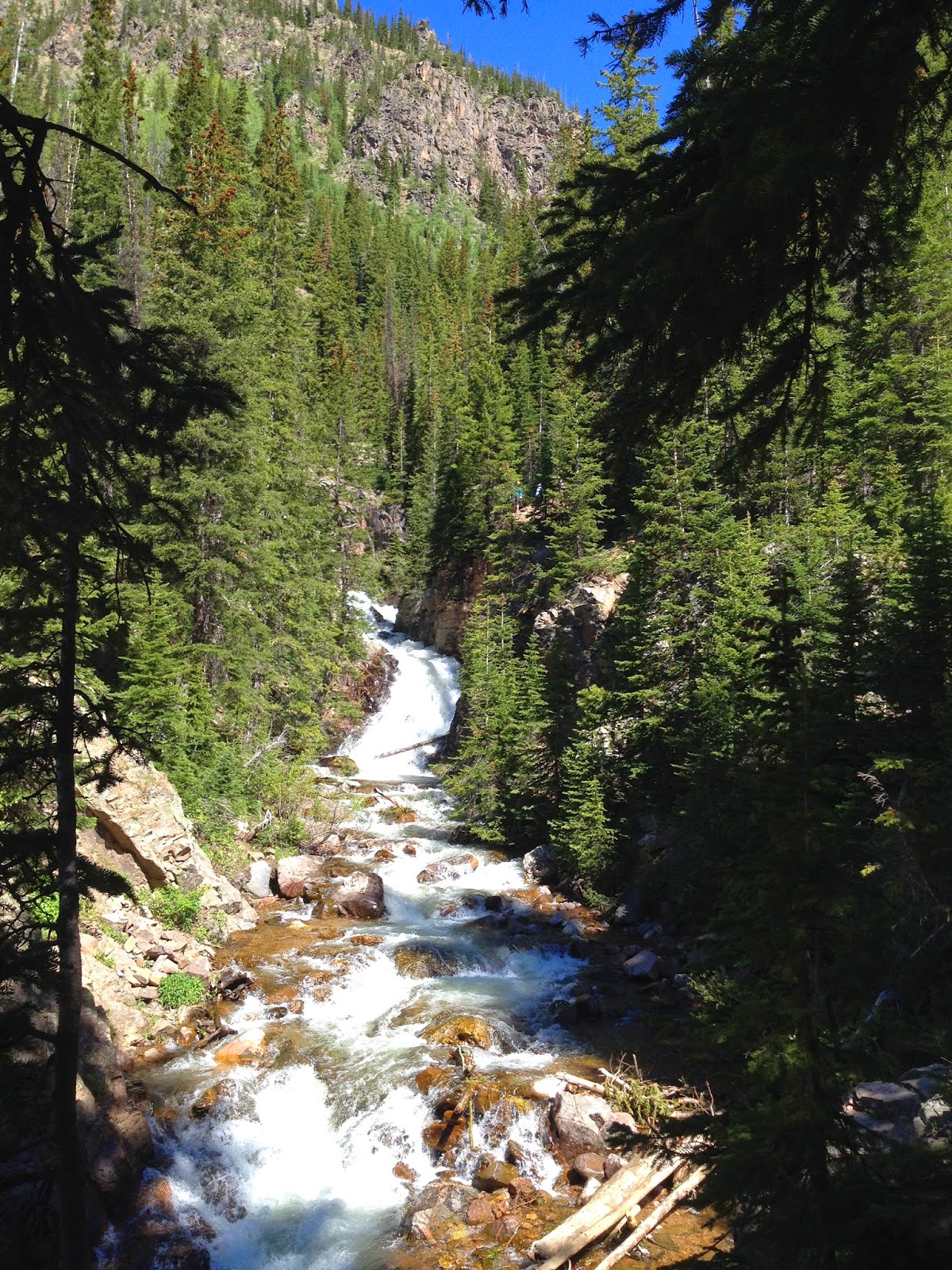 And today was a great day for a bike ride--sunny with temperatures in the 60s and low 70s! We rode from Frisco to Copper for the ribbon cutting of the new trail section there with our county commissioners and other dignitaries, TV and print media, and lots of other bicyclists. Then we continued to the top of Vail Pass and back (about 28 miles total, I think) and finished with a group lunch at Whole Foods. The photo below is of me and my husband at the top of Vail Pass. Notice that he made the ride on a mountain bike, which is much heavier than my road bike. 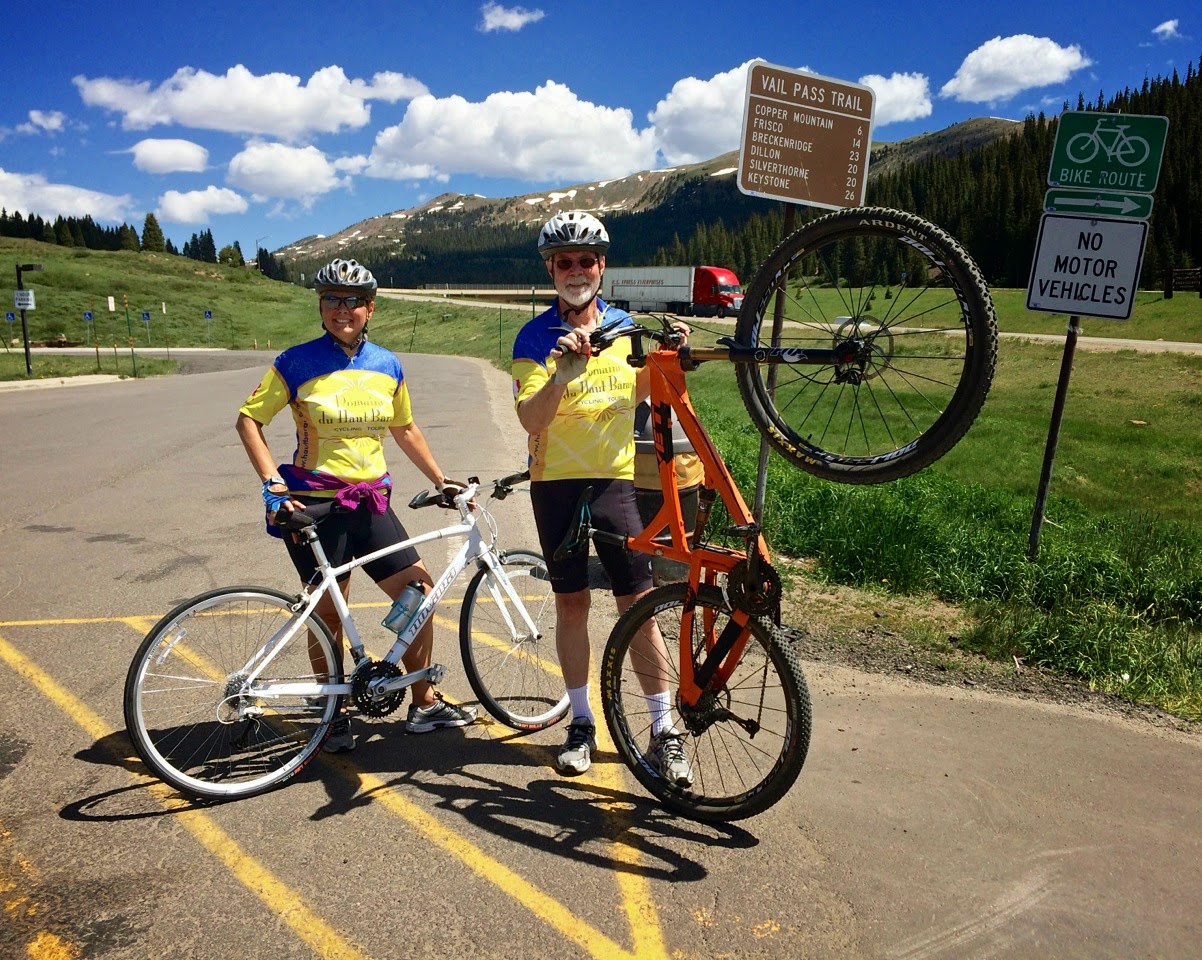 Tomorrow, we'll watch the 4th of July parade and enjoy other festivities in downtown Breckenridge, host a cookout at our house, then watch the fireworks. Happy 4th of July, everyone!
Posted by Beth Groundwater at 5:11 PM No comments: