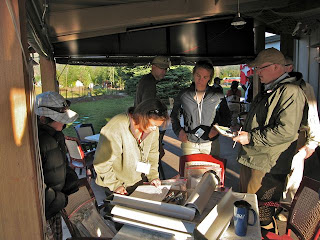 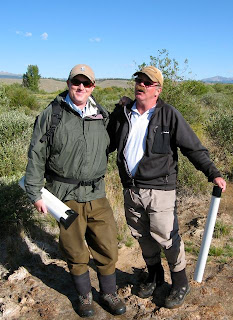 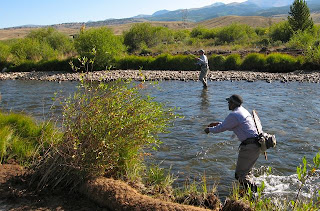 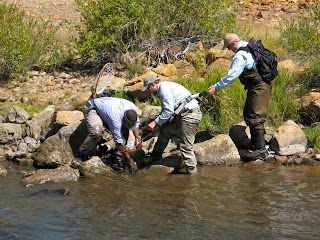 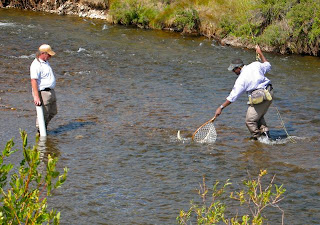 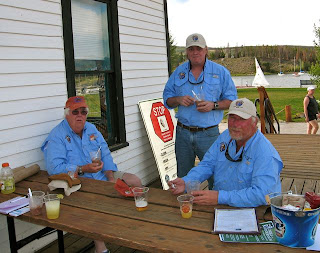 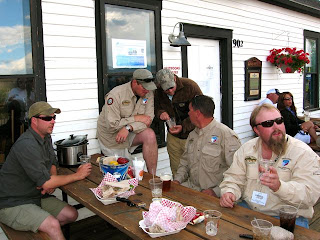 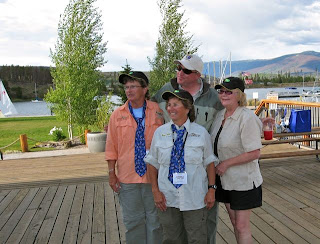 For my work-in-progress, I needed to learn more about the sport of competitive fly fishing, so after taking a basic lesson with a guide (see my July 6th post, "Fishy Research"), I contacted the organizers of the America's Cup International Fly Fishing Tournament that was held in Frisco, Colorado August 22-28. John Knight, one of the two event organizers, invited me to ride along with him on one of the competition days, and I readily accepted.

Thursday was one of the river fishing days. I arrived at the Frisco Marina at 7 am to observe the check-in of two-person fishing teams and volunteer controllers, who measured and recorded fish catches. The first photo is of John and his wife Jodi checking in controllers. The second photo is of John and fellow event organizer, Dave Pehle, suited up in their waders and holding their fish measuring tubes, because they, too, were going to be controllers for the day.

John and Dave and I followed the local team consisting of Dzifa Glymin of Denver, who operates the very useful Colorado Flyfisherman website, and Adam Dudek of Estes Park, a fly fishing guide. Both were representing Team Caddis in the event. The third photo is of Adam and Dzifa casting their rods on opposite sides of the upper Arkansas River above Granite, Colorado. The fourth photo shows a brown trout on Dzifa's line, which was netted by Adam, and John is approaching with the measuring tube to record the catch. The fifth photo shows Dzifa netting one of his own catches, with Dave standing at the ready to measure it. I think I hiked well over 4 miles that day alongside the river on uneven terrain. I couldn't wait to jump in the hot tub!

On Friday, I returned to the Frisco Marina for the Award Ceremony and Party. The sixth photo shows some of the members of the Australian team who competed. The seventh photo shows members of the North Carolina team handing out yummy homemade pork & beans from their crockpot. The last photo shows two members of Colorado Women Flyfishers who competed and one who served as a controller standing with John. A good time was had by all that night. Congratulations to the winners!

I came away from the whole event with pages and pages of notes and made quite a few contacts who graciously offered to answer future questions. Flyfishers are such wonderful people! It's too bad I'm going to have to kill one of them in my current mystery. :) John joked that I'll be able to go into any fly shop and "talk the talk" even though I'm not a flyfisher myself--yet!
Posted by Beth Groundwater at 10:08 PM

Isn't it great when research for a book is this much fun? It's good to be a "lifelong learner," so educating oneself on a topic is always new and exciting.

Sounds like you had a lot of fun. I only tried fishing once and hated it - I think I identified too much with the fish.

It sounds like you had such a fun time and met a lot of interesting people! Your fly fishing experience reminds me of the book Time is a River by Mary Alice Monroe which gives a lot of info about fly fishing. It is about (among other things) women in a family who are fly fishing instructors. Can't wait to read your new book! Hope you're having a great week!

How can you kill off a fly fisherman - didn't your guide teach you about "Catch & Release?"