Peeling the Onion and Backtracking 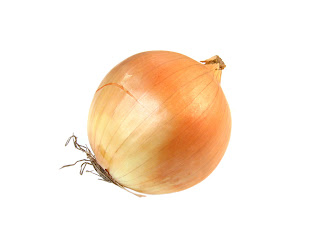 On October 4th, I blogged about hitting the halfway point in my work-in-progress (the third Claire Hanover gift basket designer mystery) and celebrating that milestone. Soon after, though, a nagging feeling that something was wrong with the story started in the back of my brain. I took a break from writing for a couple of days to let that feeling work its way from my subconscious to my conscious brain. You see, I've learned to take my intuition seriously when it comes to my writing.

Finally I realized what the problem was. I had revealed something too early in the story. This is a common mistake for me. As someone who used to write User's Manuals and Design Documents, the drive to explain everything clearly is deeply ingrained in me. However, that doesn't make for a good mystery! In a mystery, things must be left unexplained, or partially explained, so questions are planted in the reader's mind. Those questions, in turn, keep the reader turning pages.

The art of story-telling has often been equated to peeling an onion. Layer after layer is slowly pulled back to reveal some of what lies underneath until gradually the core of the story is revealed. I had peeled back a layer too soon. So, I had to do some backtracking. I pulled the conversation where that tidbit of information was revealed out of the manuscript and figured out how to replace the conversation with one where the information was not revealed--yet. That meant backtracking in my page count. It only took a couple of days of work, then I was moving forward again. It needed to be done, because if the early revelation had propagated throughout the rest of the manuscript, the story wouldn't have been as mysterious and interesting.
Posted by Beth Groundwater at 7:30 AM

One of the trickiest and sometimes neglected aspect of writing a mystery these days is "the mystery." For me one of the delights of reading a "crackling good mystery yarn" is in the intrigue of wondering what's really going on under the surface and being delighted as secrets are revealed in ways that undermine previous assumptions. You speak of peeling the onion back. I like to call it leaving breadcrumbs. Good stuff!