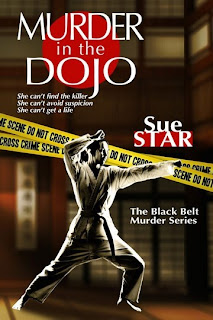 As promised yesterday, fellow Colorado mystery author Rebecca Bates is visiting my blog today. To read her bio and see her photo, please page down to yesterday's post.

Above is the cover photo for her most recent book, Murder in the Dojo, which was published in August, 2011 under her pen name of Sue Star. In the book, Nell Letterly’s dream job as a karate instructor involves a few little first-day glitches. She finds the guy she replaced very dead—killed with her martial arts weapons. The police don’t bother to investigate anybody else. Her boss suddenly disappears. The dojo is a dump and the students know nothing. Plus, she faces foreclosure on her house, and her teen-age daughter hates her. What to do about all this? Line the students up and look positive. After work, find the killer before the killer finds her.

Below is Rebecca's guest post about The Mysterious Case of Pen Names. Please leave a comment for Rebecca to let her know what you think, and feel free to ask her any questions you want about the post, her books, or her life as a writer.

The Mysterious Case of Pen Names
Whatever happened to Alice Sheldon, William Anthony Parker White, Frederic Dannay, and Manfred B. Lee? Today we remember their famous pen names better than we remember their real names.

We writers work hard at this writing business, and one small reward is seeing Our Names in Print at long last. That should justify all the hours we’ve spent, locked away in our imaginary garrets, having to answer our mother/spouse/child who calls up to ask, “What are you doing?” and we have to answer except, “Nothing.” And then comes the day when we can finally point to Our Names in Print and prove that we’re not absolute and utter derelicts. Why should we lose out on that sense of achievement with a pen name?

Lots of writers have used pen names for many reasons. Alice Sheldon felt that she needed to hide her gender to break into a male-dominated science fiction world, and so she became James Tiptree, Jr. William Anthony Parker White wrote and edited both science fiction and mystery — he became Anthony Boucher, a name that spawned Bouchercon and the Anthony Award for the mystery field. Frederic Dannay and Manfred B. Lee wanted to collaborate, and they became Ellery Queen.

There are as many reasons for using a pen name as there are writers who’ve used them.

I never expected to use a pen name. I like my name. As Rebecca Bates, I’ve been fortunate to meet lots of folks in the mystery community through my work with Bouchercon and Sisters in Crime. My friends won’t know me as someone else.

But I write in multiple genres. It helps me grow as a writer to explore the variety of structure and style that readers of different genres expect. I want to keep growing, instead of producing the same kind of story over and over. As soon as I finish a project in one genre, I jump to another (but only the genres I like to read!) I wander all across the board. Readers won’t necessarily follow you there unless, for example, your name begins with an “S” and ends in King. So I’ve fallen into using pen names. Pen names are clues for readers. Pen names point readers to the particular type of story they like to read.

My first novel, a romantic suspense, came out under my maiden name, Rebecca Williamson. Since then my science fiction stories have come out under my married name, Rebecca Bates. Now I’ve written an amateur sleuth mystery, which is a more traditional whodunnit, set in today’s funky world, and it’s part of a series. Fans of such cozies don’t always want their heroines to brood about the mysterious men they’re attracted to. They don’t always want to save humanity through science. I need to separate those types of stories, so as not to lead my readers astray. That’s my reason, why I chose to go with a pen name. I just fell into being Sue Star.

Being Sue is no secret. Keeping a secret like that today would be difficult, unless I moved into a cave (no, thanks!) Sue Star is one of the hats I wear. It’s fun, being more or less anonymous, but at the same time anonymity is challenging in introducing pen names to readers. !Caramba! Who knows if this mysterious case of using pen names will ever be satisfactorily resolved? One thing’s for sure: I’m looking forward to the journey.


Thanks, Rebecca! Now, who has a comment or question for her?
Posted by Beth Groundwater at 5:00 AM

Wow, Sue/Rebecca! Nice cover! :) I'm curious how you picked the name Sue Star. Can you tell us more about her origins?
With multiple pen names, how do you handle your "brand" in real-life and on the internet?
Finally, how do you manage to juggle so many projects? :)

Really enjoyed your article, Rebecca. I sold my first book (while going through a divorce), and requested my maiden surname be used ( Collins), which I kept for the following books. When I sold a book to another publisher, different genre, my agent said I should use a different first name and she suggested "Cassandra" which I used. Later I learned that was her dog's name :)

Hi Rebecca, (Beth, too) I enjoyed the post and your comments, it's also fun to think about all the known and unknown pen names out there. I've been thinking about possible names, myself, and find it much more difficult than I expected. Come to think of it,I'm actually using a pen name now. It just doesn't seem like it, because I used to be Carol Caverly. Ah, the puzzles of life!

Thanks! Sue Star was an easy name to pick, Lesley. Sue is actually my middle name, and I just love stars--the celestial kind :-) Then I googled the name. It seems that all names are already taken, but at least there weren't any other mystery writers with that name, at least not at that time!
As for handling the brand, that's still a work in progress! Any ideas?
And for juggling projects--I just switch off. Sometimes I set different times of day (or night) that I work on specific projects, or else I set a deadline, take the project as far as I can take it, and then move on.

That's a great story, Colleen! It reminds me of some advice a writer once gave me. She said to make sure you pick a pen name that you don't mind being called.

Right, Carol! I used to be Rebecca Williamson, too, and now it's a pen name! Who knew?

Rebecca,
I'm enjoying your visit, today & tomorrow. Thanks for being a guest.

I use a pen name for the mysteries I write but my bank decided to stop letting me deposit checks made out to that name. I had to produce my driver's license with my name on it, produce all four books with that name showing on the copyright page, and finally point out my picture on the author page with my pen name under it before they accepted my identity.
Sometimes Nancy Lynn Jarvis

Sheese, Nancy! What a pain.

Thanks for sharing, Nancy! I'm glad you convinced your bank so that you could get your money. Your experience is a good reminder that we need to make sure our publishers know to whom to write the check!

Good post, Rebecca. You've focused on something I've been thinking about lately. I like Colleen's comment about the dog named Cassandra and could borrow my cat's name (Katrina).

Kat and Pat do rhyme! So, are you thinking of a pen name because you'll be writing in a different genre, Pat?