I had a great time at the 2012 Bouchercon mystery conference in Cleveland, Ohio last weekend. Named after mystery author Anthony Boucher, this is the largest annual mystery convention in the United States, where mystery authors and their fans can mix and meet. I've heard estimates ranging from 1200 to 1700 for the number of attendees last weekend.

I arrived in Cleveland on Thursday after leaving home at 5 AM, just in time for the evening Opening Ceremonies at the Rock and Roll Hall of Fame. The photo below is of me posing by one of the giant guitars that decorated the plaza in front of the museum. 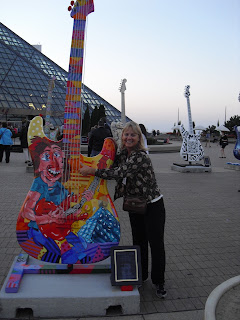 Friday morning was the Sisters in Crime breakfast, business meeting and Parnell Hall sing-along (look for me in his video once he posts it). I was thrilled to sit next to Doris Ann Norris (see photo below), known as the 2000 year old librarian and honored as the Bouchercon Fan Guest of Honor. Doris is why I really wanted to come to this conference, to join in honoring this dear lady. 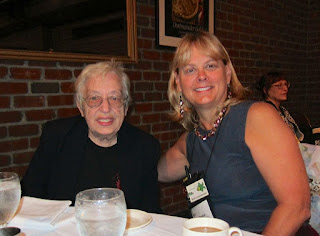 After a busy morning of panels and chatting with people in the hallways, the Hospitality Suite, and the Book Room, I gathered with Terri Bischoff, the Midnight Ink Acquisition Editor, and other attending Midnight Ink authors for lunch. See the group photo below (I'm waaay down on the end). 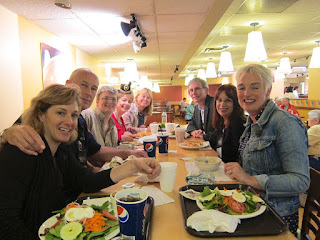 I volunteered to man the registration desk Friday afternoon and was able to sign in the Midnight Ink Publicity Director, Steven Pomije, who arrived just as we were closing the desk. He'd been held up at the airport because it was locked down for an hour while President Obama left after giving a speech in Cleveland. I showed Steven around, then we rendezvoused with Terri and others for drinks before going to the evening reception.

After a fun-filled morning of panels on Saturday, I took photos of the Midnight Ink signing at the Mystery Mike's booth in the Book Room late morning, where authors Colin Campbell (first on the left), Darrell James (second on the right) and Maggie Sefton (first on the right) signed copies of their books (or ARCs, in Colin's case). The first photo below shows them with Terri and Steven (in the middle). The second photo shows the shelf of Midnight Ink titles (including mine) at the Loganberry Books booth in the Book Room. 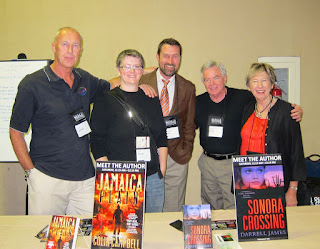 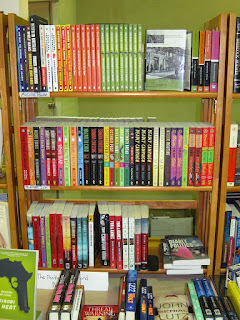 Next on my fun-time agenda was lunch with the Sisters in Crime Guppies on-line chapter, where I chatted with fellow members, some of whom I'd only known on-line in the past. Now I can put names to faces! Unfortunately, I was too busy chatting to get photos. I hope some others there took some. More panels and Guest of Honor interviews followed, then the Raffle Auction drawing. At the drawing, I volunteered to be a runner, delivering prizes to those who won them. The conference committee awarded me a very cool bright yellow Crime Scene Tape scarf for my volunteer work, which I will wear often and treasure.

After the prizes were all given out, the Anthony Awards were announced, and I was pleased to see so many women being honored, some of whom I count as friends. I've got Sara J. Henry's Best First Novel, Learning to Swim, on my to-read pile. I ended up the evening at The Chocolate Bar restaurant, enjoying a dark chocolate chili martini and Belgian chocolate pyramid dessert (see photo below). Yum! 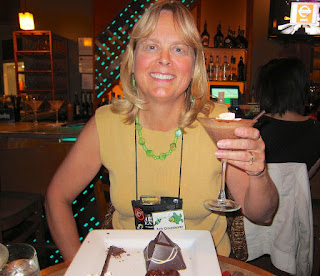 Sunday morning, my roommate, fellow mystery author Karen Pullen, and I checked out of the hotel and stashed our bags. Then it was finally my turn to be on a panel, "Red Herrings" with Keith Raffel (moderator), Ross Pennie, Diane Pirone-Gelman, and Janice Hamrick. The last two photos below show the whole panel and me up close. Keith was extremely funny and made it a good time for all involved. After signing books, one last panel, and lunch, Karen and I were off to the train station and the airport. I didn't get home until midnight that night! 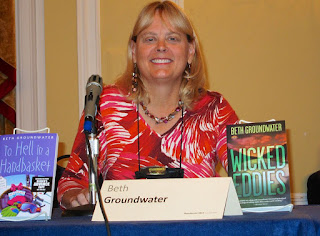 Very nice recap Beth! Hope to see you at Malice.

Hi, Beth -- Thanks for posting the pictures. I wish that I could have been there. I enjoyed meeting you at Malice a few years back and look forward to seeing you again at the next gathering.
Grace

Thanks, Karen and Grace, for your comments. Karen, you were a most excellent roommate!

The chocolate martinis were great, weren't they?