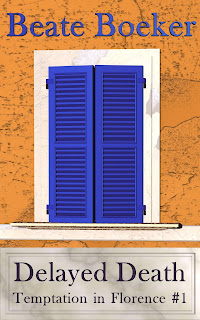 As promised yesterday, fellow mystery/thriller author Beate Boeker is visiting my blog today. To read her bio and see her photo, please page down to yesterday's post. Also, Beate is running a contest for a free electronic copy of the first book in her Temptation in Florence series, Delayed Death, the cover art for which appears above. Beate will select the winner tomorrow evening from among those who leave a comment today or tomorrow and will announce the name in a comment on this post.

The book asks the question, "What do you do when you find your grandfather dead half an hour before your cousin's wedding?" The answer is that you hide him in his bed and tell everyone he didn't feel like coming. Delayed Death is an entertaining mystery set in Florence, Italy. When Carlina finds her grandfather dead on the day of her cousin's wedding, she decides to hide the corpse until after the ceremony. However, her grandfather was poisoned, and she becomes the attractive Inspector's prime suspect. On top of that, she has to manage her boisterous family and her luxurious lingerie store called Temptation, a juggling act that creates many hilarious situations.

Sounds like a "tempting" read! ;-) Below are Beate's answers to my interview questions.

1. Who or what inspired you to start writing and when did you start?

My first novel was written when I was a teenager, and as soon as it was done, I thought it was hugely embarrassing. I picked writing up again in my thirties and then, I quickly realized that I would not get the necessary help to learn the tools of the trade in Germany as I found no online writing communities like the ones in the US. So I started to write in English in spite of the fact that I'm German and have been living in Germany most of my life. My first romance novel was published by Avalon Books in 2008.

2. What tools and process do you use to “get to know” your characters before and while you’re writing the books?

None. I just start to write, and then they unfold. From time to time, they behave in a very erratic way, and I have to change my original ideas in order to make them fit. Recently, for example, the rather eccentric mother of my heroine declared during a family meeting that she would create a “trap for the murderer”. I was aghast. That trap had not been planned, but once she had said it, I realized I had to create one. It took me several hours to come up with one that would fit into my plot.

3. How do you construct your plots? Do you outline or do you write “by the seat of your pants”?

It depends. I outline the mysteries because it wouldn't do to write one without knowing who's the murderer, but with my romances, I usually just have a hook at the beginning, and then I let it take over.

Obviously, it's best if both go together, but for me, the emphasis is on characters. I don't need a cliff hanger and life-and-death questions at every corner. I prefer to be taken on a trip, to see things from a different perspective, to play with viewpoints and insights and feelings.

5. What is the biggest challenge you’ve faced as a writer and what inspires you and keeps you motivated?

The biggest challenge is the marketing, though I'm a marketing professional in my day job, so it shouldn't daunt me. However, it feels more like a chore than an passion when it comes to promoting myself. The writing itself inspires me and makes me happy. It's part of what I have to do to keep my soul alive. Also, I love to read my stories out loud and hear people laugh at the places that I find funny. Hard to top that!

6. What is a typical workday for you and how many hours a day (or week) do you devote to writing?

I guess I write like six hours a week, only on the weekends. During the week, I do marketing stuff because I can only do it in the evenings, after both the day job and the family are dealt with. My best writing time is in the mornings, right after breakfast. Or after an afternoon nap! I need roughly nine months to write one full-length novel.

7. What advice do you have to offer to an aspiring author?

I've got two bits of advice, actually! First, listen to the things that are shared in author loops, i.e. learn the trade. Second: Never give up.

8. Now here’s a zinger. Tell us something about yourself that you have not revealed in another interview yet. Something as simple as your favorite TV show or food will do.

My curls are natural. They took ages to come; in fact, I could already walk and didn't have any hair, and my mother was getting worried that this would have to be my permanent look. She was very relieved when they finally spiraled their way into freedom. :-)

9. What are you working on now and what are your future writing plans?

I'm editing the third novel in the series Temptation in Florence. It's called Banker's Death, and the stakes are high when the family realizes that they're in danger of losing their home. After that, I plan to translate my most popular romance, A New Life, into German. It's also set in Italy, and it's about a young woman who has to start from scratch in a new town and with a language she hardly knows. I've just started to translate my own novels and find it surprisingly difficult. It shouldn't be, as it's my mother tongue, but I keep having to look up expressions in the dictionary.

10. Is there anything else you would like to tell my blog readers?

I love cozy and funny mysteries like Murder with Peacocks by Donna Andrews. If they include a bit of romance, even better! If you have any recommendations for me, do tell me about it, so I can hunt them up and read them!


Thanks, Beate! Now, who has a comment or question for Beate Boeker? Good luck in the contest!
Posted by Beth Groundwater at 4:30 AM

This is a new author to me, but I certainly like the sounds of this book a lot. Would love to be the winner of the e-book, and will make sure to add this to my to be read list too. Looking forward to this series fore sure. Thank you for having this author on your blog, Beth.

I found Beate Boaeker by mistake, but what a great mistake. After reading that first book I went out and purchased very book I could find. I am eagerly awaiting her next book. Fantastic author!!!

Beate--
What a wonderful interview. Thank you for your writing advice and your book sounds great. It's on my TBR list!
Victoria--

Delightful interview. Beth, you asked just the right questions to reveal Beate's personality and style. I already own the book so you can leave my name out of the drawing. I must say, though, that whoever wins is in for a treat.

Great interview, Beth and Beate. This is definitely a series I want to obtain. Good luck with your German translations. Sounds similar to sewing ... My Nana always said she'd rather make something from scratch than alter it. Keep up the good work and thank you, Beth and Beate, for being such inspirations. Maurine Bettner

Great premise. Sounds as if this will be a fun read.

Thank you so much for your many wonderful replies. I loved to hear about the "great mistake", Pamela. ;-) Thank you for replying, all of you! I'll wait one more day and will draw the winner tomorrow!

Ceblain, you won the digital copy of Delayed Death! Could you contact me via Facebook (Beate Boeker Author or Beate Boeker) in a direct message with your e-mail address so that I can send you the .pdf?
Beth, thank you very much for welcoming me to your blog.

Hi Ceblain, if you have trouble to get in touch with me, just leave a message here and tell me where to find you.