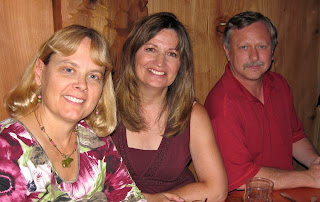 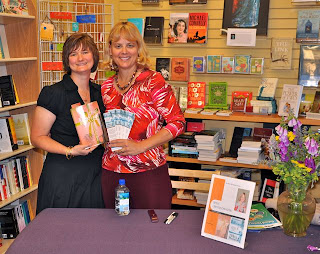 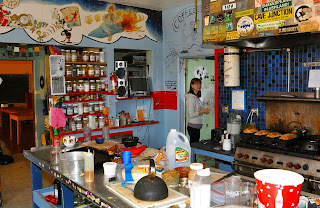 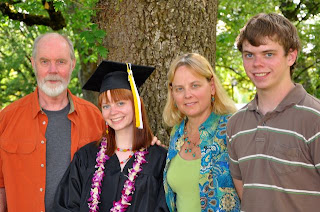 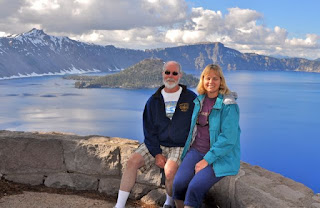 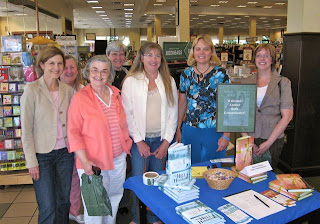 Tuesday and Wednesday, June 9th and 10th, my husband and I stopped in Seattle to visit his sister and her family. While there, we dined with more relatives, attended my husband's niece's choir concert and watched a video of her previous perform- ance in a school play, so we were well- entertained. The first photo is of me and Susan Schreyer and her husband from the Puget Sound chapter of Sisters in Crime, taken at the Pub at Ravenna Third Place.

On Thursday, June 11th, we drove south to Salem, Oregon, where I signed books at the Tea Party Bookshop. The second photo is of me with fellow author T. L. Cooper there. She and her husband hosted us at their home after a delicious Thai-fusion tapas & wine meal at one of their favorite restaurants in nearby Corvallis.

Friday, June 12th, was the start of the graduation festivities in Eugene, Oregon. We met my daughter and her best friend, who flew in from Colorado Springs for the event, at the Campbell Club, the vegetarian co-op where my daughter lived her last three years while attending the University of Oregon. To save costs, students are assigned chores and cleaning duties. The third photo is of the kitchen in the co-op, which hadn't been cleaned in awhile. A breakdown in the chore schedule occurred because of final exams and residents moving out. The co-op was definitely an interesting place! That afternoon we picked up our son at the airport.

Saturday, we attended my daughter's boyfriend's graduation ceremony in the morning with his family, then ate lunch at the Campbell Club, and greeted more relatives as they arrived--my husband's sister's family, and his cousin's family. The group, now swelled to 16 members, attended my daughter's ceremony in the afternoon under a blistering sun. The fourth photo is of my daughter, son, husband and me after the graduation.

That evening, the group of 16 dined at the Pizza Research Institute, a gourmet vegetarian pizza restaurant. We ate salads and pizzas and drank lots of wine and beer to toast the two new college graduates. Then about half of the group drove south to Cottage Grove to hear my daughter's boyfriend's band, the Alder Street All Stars, play a lively and entertaining bluegrass concert.

After a late start Sunday morning, the families of the two graduates drove to Crater Lake, Oregon for a two night stay at the Crater Lake Lodge. We took scads of photos, hiked three trails, and ate some great meals together, with lots of socializing and laughter. A fun time was had by all. The fifth photo, taken by my daughter, is of my husband and me at the lake.

Yesterday, we split up to go our separate ways, and my husband and I drove north to Bend, Oregon, where we are spending two nights with his cousin's family. I dined with the Central Oregon Writers, and in between bites of Mexican food, talked about marketing short stories. The sixth photo is of members of the group and me at the Barnes & Noble bookstore, where I signed books after the dinner. Today, after catching up on e-mail and social networking, we hiked to Tumalo Falls, then munched on Lebanese tapas at Joolz restaurant in Bend. Yum! Tomorrow, we drive to Twin Falls, Idaho for an evening signing.
Posted by Beth Groundwater at 10:45 PM

I hadn't realized your daughter was at U of O. It's on the list of places my son's thinking of for grad school.

Looks like the tour is going well. Wishing you all the best, and sorry I couldn't make it down there to see you.

Sounds like a busy and satisfying tour. Hope you sell a lot of books!