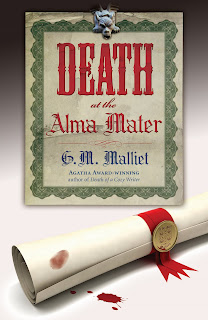 G. M. Malliet's most recent release is Death at the Alma Mater, the third book in the DCI St. Just mystery series. St. Michael's College, Cambridge, is prestigious, stately, and in frightful disrepair. To replenish the college's dwindling coffers, the Master holds a fundraising weekend for wealthy alums. But all goes awry when the glamorous Lexy Laurant is found viciously strangled to death. Gorgeous and successful, Lexy inspired jealousy, envy, and spite in everyone. There's a lengthy list of likely suspects: Lexy's debt-ridden Latino lover, her novelist ex-husband who jilted her, and a hot-tempered Texan once rejected by the victim, among others. As Detective Chief Inspector St. Just weighs clashing egos, he discovers unsavory secrets...and a most shocking twist.

Doesn't this description sound like an absolutely yummy puzzle to solve! Now, here's my interview with G. M. Malliet:

1. What tools and process do you use to “get to know” your characters before and while you’re writing the books?

The characters emerge as I write—all the business that attaches doesn’t arrive all at once. It is one thing to have in mind a character who is “sexy” or “self-absorbed,” for example. The fun is in describing exactly what that means, beyond the obvious. The mannerisms, the attitude, the habits of speech, the hairstyle. Sometimes I can’t believe they pay me to do this job—it’s so much fun.

2. How do you construct your plots? Do you outline or do you write “by the seat of your pants”?

I plot but very loosely. If I know too much of what lies ahead, I might get bored with the whole thing myself. A novel is such a long slog you have to keep yourself entertained however you can. But if I have no plot at all, no idea where I’m headed after, say, Chapter 5, that spells trouble—I think that’s where most writers hit a wall.

I’m going to cheat and say that the ideal is both combined. Agatha Christie is often chastised over her characters. I say that she delineated her characters beautifully without a lot of wasted breath and meandering from the story. Then, of course, her ability to plot was second to none. Perfection.

4. What is the biggest challenge you’ve faced as a writer and what inspires you and keeps you motivated?

This is a hard one to answer. Praise keeps me motivated, I suppose, but that only goes so far. The fact is I don’t know what I’d do all day if I couldn’t write. Can’t imagine it and won’t even try. As to the biggest challenge? I think each writer faces that one down every day—the challenge of sitting down and writing something, anything, for that day.

5. What is a typical workday for you and how many hours a day (or week) do you devote to writing?

I try to keep the same hours I’d have at a 9-5 job, five days a week. So I basically try to be at my desk doing something for about eight hours a day with a short break for lunch. Some days are good days—almost pure, in the zone, nothing but writing: I could be on the moon for all I know. Some days involve too much email or messing about on the Internet.

6. What advice do you have to offer to an aspiring author?

Try to minimize the looking-for-an-agent/editor stuff. Keep that to an hour a day, at most. Writing is your job and if you’re ready to come out fighting when they ring the bell, you’ve spent your “waiting” time well.

Favorite TV or DVD shows are Dexter, Inspector Louis, Inspector Morse, Inspector Lynley, Midsomer Murders, Poirot, Agatha. Have you spotted the trend here? You would think I’d be tired of mysteries, wouldn’t you, but that’s really my favorite form of entertainment. I did take a break from crime to watch as much of the Winter Olympics as I could. I also love going to the movies, where I branch out from mysteries to current favorites, even though any more it’s an expensive habit.

8. What are you working on now and what are your future writing plans?

I’m writing two as-yet untitled books for Thomas Dunne/Minotaur. They feature Max Tudor, who is the Vicar in a small village in Southern England. He also happens to be a former MI5 agent who entered the Church to escape the violence that constantly surrounded him. But when one of his more bellicose parishioners is murdered, shattering the calm of his idyllic adopted village, the police turn to him for help in sorting it all out.

I welcome visitors to my website, where there is a page for contacting me. I don’t have a personal blog like yours, Beth, or at least not one I maintain regularly, but I participate as do you in our group blog Inkspot. I’m also on Twitter and on Facebook. Thanks for hosting me today!


Okay, readers, fire away! What do you want to know about G. M. Malliet that I didn't cover? Do you think she's willing to tell us what G. M. stands for? :) Got anything else to say or ask?
Posted by Beth Groundwater at 6:00 AM

I've got a question. I know it's sometimes hard to count, but how many drafts of a manuscript would you say complete before it's "ready?" Or are you one of those writers that spills it out perfectly from the get-go?

G.M.
I have a couple of questions. The first one is how many months does it take you to complete your manuscript? The second question is toward the end of your book...
Do you spend more than eight hours a day with the book? In other words do you eat, sleep and rink your book until the last page is written?
Pam

My question is... Which of your books was the most fun/fullfilling to write and why?

Gin, you are my hero.

Thanks for your questions, folks. I'm sure G. M. will stop by soon to answer them. In the meantime, keep them coming!

G. M.,
Thanks so much for guesting on my blog today!

Sorry to be late getting here!

Alan - I write in scraps of paper, rather than drafts. Yours is one question there is no answer to. The scraps are only re-written in that they need to be put in coherent order, and so need to be smoothed out. Make any sense?

Pamela - A year is good and I wish I had 18 months. But I think 18 months is the absolute outside range ...otherwise I'd stretch out the process to no purpose.

Toward the end of the book I'm pretty possessed with it, yes. I suffer from insomnia so a lot gets written in the middle of the night!

Natalie - This is like asking me which child is my favorite. But the truth is, I really loved my second book because it was written in almost a compulsive way. Just tumbled out at all odd moments (see my reply to Pamela about writing as obsession).

p.s. Keith - congratulations on having Dot Dead Diary named one of the best blogs on crime writing!

Just want to say how much I enjoyed this interview with one of my favorite writers. And I know what the "G" stands for. :-)

Sandra - Thank you so much. That is extremely flattering to me. OK, the G stands for Gin or Ginny but I wish it stood for Gwenhwyfar, a lovely name I just came across in researching Welsh names.