Saying Goodbye to a Dear Friend

After many weeks of putting off the inevitable, my husband took our beloved dog, Blackie, to the Humane Society today to be put to sleep. She was fourteen and a half years old, mostly deaf and arthritic, had failing kidneys and liver, and was on painkillers, but what finalized the decision was her loss of bowel and bladder control. And it was at the worst possible time, when our house was on the market and had to be clean and "show-ready" at all times.

We adopted Blackie from the Humane Society shelter when she was 11 months old. They knew her mother was a black Labrador, but the father's breed was unknown. Whatever breed he was, he was responsible for Blackie's smaller size than a typical lab (55 pounds) and the kink in her tail that made it curl like a pig's tail. Our kids were 5 and 8 when we brought Blackie home to live with us. They named her and went through the obedience training classes with us. Blackie was an intelligent Alpha (except with us) dog who asserted herself over most other dogs and had an extensive vocabulary before she went mostly deaf. In the last few months, we've relied on loud claps and hand signals.

Blackie seemed to have a good last day, munching on her last dental chew and dog biscuits and taking her last car ride. At the shelter, my husband encountered another family whose dog was obviously in pain and experiencing seizures, so we were glad we didn't wait that long. Blackie was still a mostly happy dog, though it took her a long time to lay down and get up, and her "accidents" embarrassed her. She had a good life, but she was a very special and loving companion and we'll miss her a lot. Below is a photo of her taken yesterday. The white on her face and paws is from age. 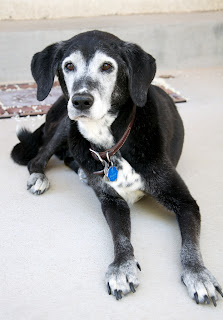 Posted by Beth Groundwater at 2:15 PM

Beth - My heart goes out to you. Losing a beloved pet like Blackie is hard on everyone. We went through that two years ago when we lost our beloved Oscar. My thoughts and prayers are with you...

I have an urgent prayer request on arise 2 write.
andrea

So sorry for your loss. Your in my thoughts and prayers.

I'm so sorry, Beth. My heart goes out to you and your family. Blackie had a wonderful life with you all.

Dear Beth we are going through the same process with our dear old Bessie so my heart goes out to you.
Hugs from Jacki

Thanks, everyone, for your comments. I really appreciate your thoughts and prayers.

What a sweet face she has in that photo. Hugs!

My condolences. It's hard to lose a member of the family.

Glad you and Blackie had all those wonderful years together.

Will keep you in my thoughts.

Oh, how sad for you Beth, and such a hard time to be letting go of the place where she's lived with you while you're losing her. Wishing you and Heartbeatoz the best of memories of your lovely pets.

I'm sorry for your loss.

I'm shedding a tear for you and your family, Beth. I hate that our dear pets live such short lives. You'll miss Blackie. Sounds like a dear. I still miss ALL my pets that are gone.

Beth, I'm so sorry for the loss of your beloved pet. My thoughts and prayers are with you.

Lauren Carr said...
This comment has been removed by the author.
6:16 AM

The idea of Rainbow Bridge was a great comfort to me when I lost my McKenzie.

Eventually, I replaced the hole in my heart with a room in my heart, but my arms remained empty.

So sorry. I know your family will miss Blackie.

You are in my thoughts and prayers. So hard to bare the lose of a special pet. Hang in there and remember the wonderful times you had together. Bless you.

Oh Beth, I am so sorry for your loss of Blackie. Our pets are our family and we never forget them. My heart goes out to you.

Beth--I am so sorry for you and your family. I know you must be grieving. You're in my prayers.

Beth -- So sorry to hear this sad news.

I'm so sorry. I recently lost a pet too and it is really quite heartbreaking. Wishing you well in the coming days.

Many thanks for the later comments. This is just to let you know that I am reading them and appreciating them a great deal.
- Beth

My thoughts and prayers are with you and your family, Beth. I hope all of your fond memories of your beloved Blackie will help sustain you through the difficult days.

I ache for you and your family, Beth. It took us two years after losing our beloved Emma to adopt another dog.
None will replace her in our hearts, just as I'm sure you'll always have fond memories of Blackie.