Yangon, Myanmar (Burma)
This is the second half of my trip report on my Southeast Asia trip. On the morning of Monday, December 6th, we feasted on the huge buffet breakfast at the Traders Hotel in Yangon, which our temple photo safari trip leader, David Cardinal, told us was arranged by continent (and it is!). At 8AM, the group met up with our guide, Haymar. We walked into the center of this city of 6 million residents to see some original British colonial buildings and the central market, and wound up at the docks on the Ayeyarwady River. There we photographed the stevedores unloading river barges, and ferries and water taxis unloading passengers. Two photos are below. In the second, the larger child is wearing thanaka cream, made from ground tree bark, which is used as a sunscreen and skin lotion by the Burmese. At lunch we sampled Burmese dishes such as pickled tea leaf salad and mild curries. 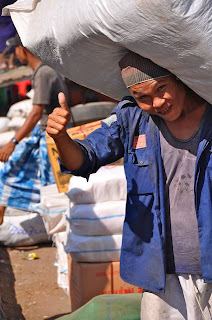 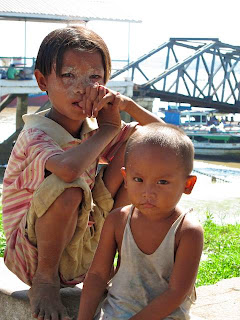 In the afternoon, we visited the huge Shwedagon Pagoda, the most revered Buddhist site in Myanmar (photo below), over 2500 years old and rebuilt several times. The stupa roof is covered with 90 tons of gold, and the wind vane on top of that is encrusted with 1100 diamonds and 1400 other precious stones, and is topped by a 76 carat diamond. The pagoda is surrounded by many other temples and Buddha statues and is teeming with visitors and teams of women earning merit by sweeping the tile flooring. Here, as in many Buddhist sites in Myanmar, visitors were required to remove shoes and socks to show respect. We stayed and took photos until well after sunset. 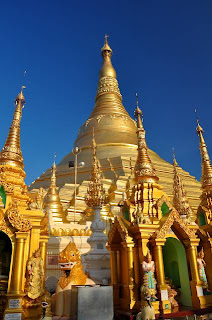 Bagan, Myanmar
We took a short morning flight to Bagan on December 7th, meeting our guide, Aung, at the airport. First we visited the Shwezigon Pagoda, with four 13 ft Buddha statues in standing positions. We also saw a building housing statues of the 37 nats also worshipped by locals. Nats are spirits of powerful elders who met violent/untimely deaths. After a stop at the Wetkyi Inn Gubyukayi temple, we saw the Tharabar Gate, where locals bring their new vehicles to be blessed for protection by the two gate nats. We lunched at the beautiful Elephant Garden restaurant overlooking the Ayearwaddy River and checked into the Thiripyitsaya Sanctuary Resort on the river. In the afternoon, we visited a laquerware factory, where I bought more Christmas gifts. Then we drove to the Shwesandaw Pagoda, built in 1057 and said to contain some of Buddha's hairs, to take photos of the sunset lighting up the 4400+ religious monuments across the plain, built in the 11th-13th centuries, from our choice of the five terraces. A heart-stopping sight!
Wednesday morning, three of our group took a hot air balloon ride, while the rest of us climbed the Mee Nyein Gone temple to photograph the other temples at sunrise (photo below) and the balloon eclipsing the sun. We rode in a pony cart back to the resort, ate breakfast, then saw the Htilomino Temple, built in 1211 on the site where King Nandaungmya was chosen over his four brothers to be the crown prince by a leaning umbrella. Next stop was the Ananda Pagoda, a local favorite built in 1105, with hundreds of frescoes in niches depicting stages in Buddha's life. A singer/dancer and instrumentalists entertained us at lunch at the Beach Bagan restaurant, then we rested before taking a boat ride on the Ayeyarwaddy River to a seasonal fishing village. We photographed people at work and play (such as drinking palm sugar alcohol, see photo below). After our return, Aung's mother cooked us a delicious dinner at her home. 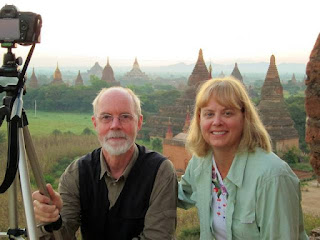 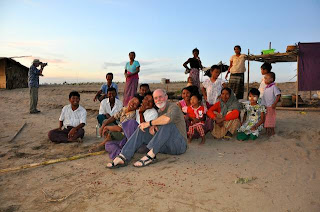 December 9th, we began at 8AM by wandering through the local market taking photos, then drove to Mt. Popa, where a monastery sits on a sheer volcanic plug 2400 ft high, with 777 narrow steps up to the top. We didn't climb up, but we visited the nat temple and monkeys at the bottom (photo below) and ate at the Mt. Popa Sanctuary Resort on the mountain overlooking the monastery (photo below). On the way there, we stopped at a roadside stand demonstrating how peanut oil, palm sugar, and palm sugar alcohol are made, with samples. On the way back, we stopped in a remote farm village to give pencils to school children (photo below) and take photos of farmsteads. After returning to Bagan, we were entertained by marionettes at dinner, including Mr. and Mrs. Honest, the poorest couple in every village. :) 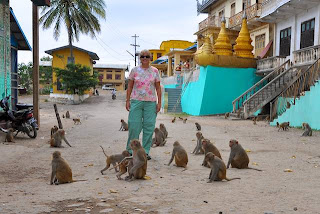 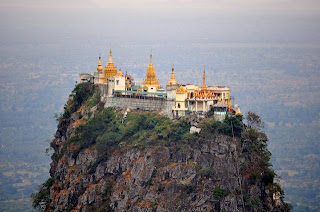 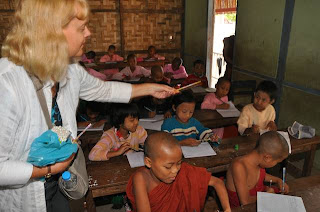 Mandalay, Myanmar
On Friday, we took a short morning flight to Mandalay and were met by our guide Yan, who took us to Sagaing Hill (Sacred Hill), home to many nunneries, monasteries, temples, Buddhist universities, etc. Our first stop was a free school for 1100 young nuns and novice monks, where we donated our remaining pencils. Then we photographed the nuns at Sakyadhita Thilashin nunnery lining up for and eating lunch (photo below). Umin Thounzeh temple, with its 45 Buddha statues in a curved arc was next (photo below), followed by our own lunch and checking in at the Mandalay Hill Resort Hotel. 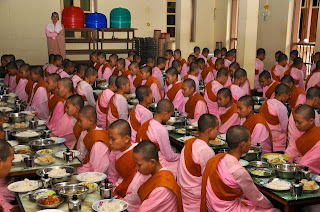 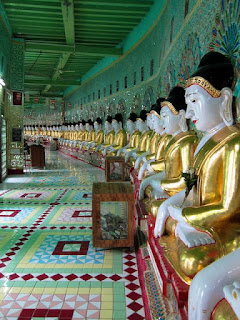 In the afternoon, we toured the Golden Palace monastery, the only piece of the ornately carved wooden palace of King Thibaw Min that was saved from World War II bombing. That was followed by the world's biggest book at Kuthodaw Pagoda--729 marble slabs, each in their own stone "cave," on which Buddhist texts were inscribed. The paper edition was printed on 38 400-page volumes. Our last stop was the Sutaungpyei (wish-fulfilling) Pagoda atop Mandalay Hill (photo below). We went to sleep to the soothing chants of Buddhist monks bestowing a week of continuous blessings on the city. 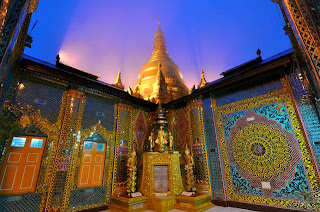 We spent the morning of December 11th taking photographs at workshops: gold leaf making, silk weaving, embroidery, and marble carving. Then we toured the Mahamuni Buddha temple. The bronze Buddha is believed to have been created 2500 years ago, as an actual likeness of Buddha made during his lifetime. Male devotees applying small squares of gold leaf have built up a layer of gold on the statue 9 inches thick (photo below). While there, we observed an extended family bringing young monks and nuns for their initiation rites. After lunch at a local tea garden and a rest at the hotel, we drove to the town of Amarapura to photograph the famous 1.2 kilometer U Bein Bridge from the shore, atop it, and boats (photo below). The longest teak bridge in the world, it connects an island in a lake to the shore. 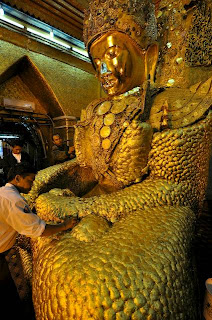 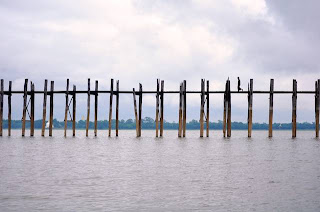 Back to Yangon, Myanmar
Sunday, the rest of the group went to the Inle Lake area of Myanmar while Neil and I flew back to Yangon to spend a final night before heading home. Haymar met us at the airport and took us to a local nunnery and monastery, where we photographed monks lining up for and eating lunch (photo below). Then we toured the huge Scott Market and stopped at the Hey Day stall in the jade section to buy jewelry Christmas gifts (the owner is a friend of David Cardinal). After lunch at a local tea garden, we went to the Chaukhtatgyi Temple to photograph the huge reclining Buddha statue there (photo below). We returned to Traders Hotel to discover we'd been upgraded to a suite because the hotel was full due to a Chinese wedding there that night (we took wedding photos, of course). 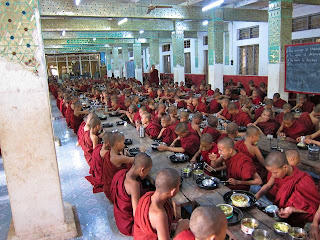 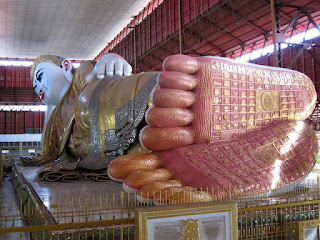 On the 13th, after taking full advantage of the hotel's extensive breakfast buffet, Haymar took us to photograph the royal barge on Kandawgyi Lake, to walk around the Chinatown area, and through the National Museum, especially to see the huge Lion Throne, covered with gold and jewels. After a final lunch at the Fig Tree tea garden that offered a huge selection of inexpensive and yummy dishes, we headed to the airport to begin our long journey home, returning with thousands of photographs, suitcases stuffed with Christmas gifts, and heads stuffed with amazing memories.
Posted by Beth Groundwater at 7:00 AM

Hellow!
I love your site, It is a pleasure to visit.
I have added your site to my site.
Please link my site to your site.
Thank you!
http://japan-mountfuji.blogspot.com/