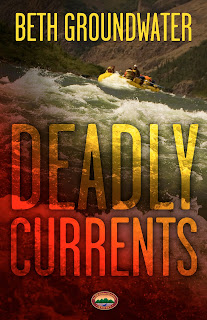 The first is from Publishers Weekly. Here's the first line:

The second is from Kirkus Reviews, and I liked it so much that I'm going to quote the whole thing:

A rafting trip down the Arkansas River gives a young Colorado river ranger a lesson in murder.

Mandy Tanner learned plenty about Pine Creek, the Numbers and Wildhorse Canyon when she worked as a guide for her Uncle Bill’s adventure tours. Now she’s using her skills to protect paddlers from the dangers of whitewater. Even an experienced guide like Gonzo Gordon wipes out every now and then, and when he flips his raft in a class V, Mandy handily plucks Hannah Fowler from the rapids. Tom King isn’t so lucky; when Mandy hauls him ashore from her cataraft, his pulse is thready. After the land developer dies on the way to the hospital, his widow Paula threatens to sue Mandy’s uncle. By the time the coroner decides that King was poisoned, not drowned, Bill Tanner is dead too. And although Mandy knows that poor diet and lack of exercise were as responsible for her uncle’s heart attack as the stress of getting blamed for Tom King’s death, she still wants to find the culprit. Not her brother David’s eagerness to sell the business and get back to his accounting practice, not her boyfriend Rob Juarez’s overprotective concern, not Chafee County Sheriff's Detective Quintana’s pleas, not even the rock through her window warning her off can stop the young ranger’s need to find the truth about how Tom King died on her watch.

Groundwater (To Hell in a Handbasket, 2009, etc.) kicks off a new series that combines outdoor action with more than a modicum of old-fashioned detection."
-- Kirkus Reviews, January 15, 2011

These publications are two of the "Big Four" that librarians and booksellers pay attention to when making decisions about ordering books. The other two are Booklist and Library Journal. I'm thrilled to be batting .500 (so far). ;-)
Posted by Beth Groundwater at 7:00 AM

Congratulations! Well-deserving of the kind words. :)

Congratulations, Beth! You're right - two of the big four. That will certainly help you with libraries!

Thanks so much, Michele and Lesa! I'm going to celebrate with drinks at the meeting of the Rocky Mountain Chapter of MWA tonight, esp. since I'm not driving. :)

That should kickstart sales for you.

Thanks, CJ and Kevin! And yes, Kevin, I hope the reviews help sales.

Good grief, Beth, not just good reviews, but good reviews from PUBLISHER'S WEEKLY and KIRKUS! Congratulations! Dance away, girl, you deserve it!

I'd dance with you, but I bet you're spinning way too fast for me to keep up!

Thanks so much, Donna and Peg! Yes, I'm spinning, but the dance circle is open for anyone who wants to join in.

I cannot wait to read this one--going to ask my bookseller for it when I am there the week after next. So excited. Congrats, Beth!

Thanks so much Deb and Jennie! Jennie, your bookseller should be able to order a copy for you readily if they don't already have copies on order.

Did you ever ride the New River Gorge in W. Virginia?

I did at 14. It was a blast! I even fell out of the raft and totally freaked out the guide when he found my age ... lol.

Reading about your book brought it all back to me.