Accidents Happen on the Water 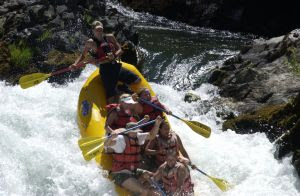 One of my favorite blogs that I follow is written by river ranger Brett Fisher. I learn all sorts of interesting things from him that make their way into my Rocky Mountain Outdoor Adventure series featuring whitewater river ranger Mandy Tanner. The latest post on the River Ranger blog is about the whitewater river accident record for the first half of 2011, and it's not good.

90% of the accidents are tied to this year's high flows. As Brett says, "This year’s high water has taken a serious toll: 53 fatalities in 47 incidents. This exceeds the previous total for the entire year and there’s still plenty of river running to go." With water levels higher than average, the speed goes up, the ratings of most rapids go up, and the danger goes up accordingly.

So, here's a word of warning to my fellow whitewater rafting enthusiasts. Be careful out there and consider going down a step in difficulty in your choices. For instance, on the Arkansas River, instead of running the deadly Numbers or Royal Gorge sections, opt for Brown's Canyon. Or if Brown's Canyon is what you normally run, opt for Big Horn Sheep Canyon instead. You should be prepared to swim through whatever rapids you're rafting through, so consider your swimming ability, too. If you're not a strong swimmer, take it down a notch and be safe.

I'd much rather see imaginary characters in my books die from being murdered than people perish in a whitewater accident. After all, I don't want to lose any potential readers for Deadly Currents and the upcoming second book in the series, Wicked Eddies. :)
Posted by Beth Groundwater at 6:00 AM

Good advice for everyone wanting to get into the water to beat the heat!

Even without the high water, the Royal Gorge with its class five rapids isn't for everyone. My husband became a swimmer at Sunshine Falls (I think that's its name). Fortunately, he was able to grab the raft and another fellow and I were able to pull him back in. I got my one and only black eye during that experience.

Thanks for your comments, Jenny and Kari! I'm trying to imagine Kari now with a shiner. :)

We stayed in Moab, Utah this summer, on the Colorado. The lodge has a restaurant that sits right above the river and its power--even devoid of whitewater--was apparent. The waitress told us 10 people had already drowned on that particular stretch this summer. Thanks for the warning. Good stuff for fiction, though...

I like your comment about, you'd rather see people murdered in a book than die in a whitewater accident. I agree. We live near a lake and there are drownings every year. Fiction is better than the real thing.