Phnom Penh, Cambodia
This is the first half of my trip report on my Southeast Asia trip. After four flights and 28 hours of travel, we fell into a comfy bed at the Blue Lime boutique hotel in Phnom Penh, Cambodia. The rooms and furnishings are all concrete, but with mattresses and cushions are comfortable, pretty, and clean. After breakfast at the hotel on Sunday, November 28, we walked to the Royal Palace compound and hired a guide to give us a tour of the complex and the Silver Pagoda (called that by Westerners for its silver tile floor, and called the Emerald Buddha Pagoda by locals for its Buddha carved from a huge raw emerald). After a walk along the Sisowath Quay on the Tonle Sap River, we returned to the hotel for lunch and a swim, then toured the National Museum, followed by a drink at the Foreign Correspondents Club. Next was a fish foot massage (photo below), where ticklish small fish nibble the dead skin off your feet, then for dinner, a popular Khmer dish, fish amok (mashed fish with curry seasoning served in banana leaf cups). 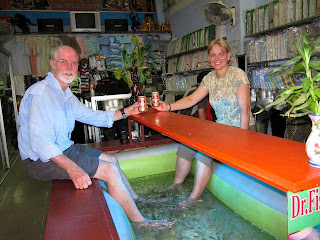 Monday morning we took a wild ride in a tuk-tuk through the city's busy streets to the Russian Market, where I bought Christmas gifts (lots of silk!) and pencils to hand out to children later. After a lunch/swim break at the hotel, we rode another tuk-tuk to the Tuol Sleng Genocide Museum, a high school converted by the Khmer Rouge into a torture facility. Out of 20,000 prisoners who went in, only 7 made it out alive. Next stop was Wat Phnom, the hillside temple from which the city gets its name, and the ritzy Raffles Hotel for drinks. We walked to the riverfront, passing a bustling local fish market, ate dinner at the Mekong River restaurant, and walked back to the hotel.
Siem Reap, Cambodia
The morning of November 30th, we met our driver who took us by car through the countryside to Siem Reap. We stopped at the Skun Village, where we turned down the opportunity to sample fried crickets and tarantulas, but Neil let a live tarantula crawl on him, to the amusement of other tourists. We stopped again to take photos of an Angkor-period sandstone bridge and arrived at the Prince D'Angkor Hotel early afternoon. There, we joined our temple photo safari leader, David Cardinal, and the rest of our small group for a late lunch. Our first photo stop was the north gate of Angkor Thom, then we toured the Preah Khan Buddhist monastery complex, built around 1190, until after sunset. The group dined at The Soup Dragon and said goodnight to each other at 9PM.
We met at 5AM Wednesday morning to drive with our guide Sopheap to Angkor Wat and join hundreds of international tourists lined up to take sunrise photos of the temple complex (photo below). By 8AM, we were eating breakfast outside the gates, then we returned to tour the interior. After lunch and a swim at the hotel, we reconvened with the group to photograph the Neak Pean (Coiled Serpents) temple built on an artificial island in the manmade Pool of Jayavarman. Next stop was sunset at the Pre Rup crematorium/funerary complex built in the late 900s AD as a Hindu temple dedicated to Shiva. Dinner was grilled exotic meats, including kangaroo, ostrich, and snake, at the Cambodian BBQ restaurant. 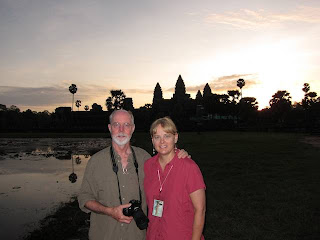 We met even earlier at 4:45AM on December 2nd to drive to Banteay Srei (Citadel of Women), built in the late 900s AD, for sunrise photos. The temple is smaller than most of the others in the area, but is also the most beautiful. Its hard red sandstone walls are covered with expertly carved ornate decorations (photo below) that have held up very well. When busloads of tourists began to arrive, we left to eat breakfast at a restaurant outside the gate. Next stop was the Cambodia Landmine Museum and Relief Center, which I blogged about on Inkspot. After a mid-day rest, we returned to Angkor Wat to photograph the extensive bas relief murals on the walls, including the "Churning of the Sea of Milk" Hindu legend and depictions of the 37 heavens and 32 hells. Next we stopped at Bayon to photograph its bas relief carvings and take photos of the temple at sunset (photo below). 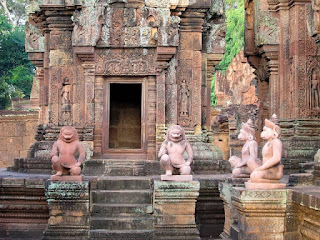 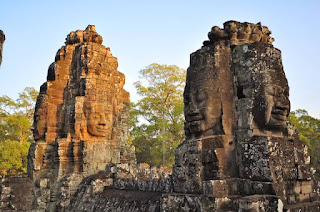 We "slept in" and were able to sample the hotel's breakfast buffet before meeting the group at 6:30AM Friday. We visited the Ta Prohm temple, which was built in the late 12th century and was featured in the "Lara Croft: Tomb Raider" movie. The temple was only partially restored and many huge trees whose roots are intertwined in the structure were left (photo below). When large tour groups swarmed in around 10AM, we drove to Prasat Kravan (the Cardamon Sanctuary) to photograph its bas relief portraits of the Hindu god Vishnu. After lunch at the Butterfly Garden restaurant and a rest, we walked through the Terrace of the Leper King maze and along the stone wall carvings of the Terrace of the Elephants (photo below). We ended up at the Bayon temple again and photographed the huge stone faces on its roof (photo below). 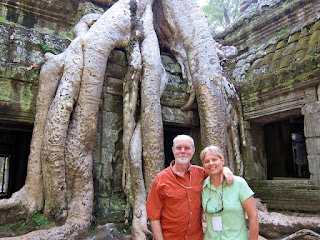 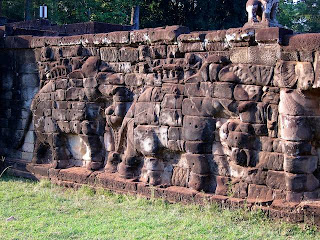 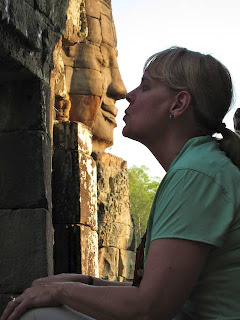 We rose again at 5AM on December 4th to drive to Rolous and photograph sunrise at the temple of Bakong and monks leaving the nearby monastery to collect their daily alms. Then we took photos of ox carts lining up to take tourists for rides and walked through the town's market, photographing the stalls and people. After a 10AM brunch, we drove north to the large Beng Mealea temple complex. It was recently opened after a German group finished de-mining the area in 2007 and is not reconstructed. Huge mounds of stone blocks showed where arced ceilings had collapsed. Next stop was an ancient quarry, where temple blocks were cut out of a stream bed, then the long drive back to Siem Reap. The next day was a travel day, flying from Siem Reap to Yangon, Myanmar (Burma) via Bangkok, Thailand. My next post will cover Myanmar!
Posted by Beth Groundwater at 7:00 AM

Awesome report. Love the pic of you kissing the statue. Did you eat the same fish who tickled your feet?

That was very interesting. I've heard of the fish pedicures! There was something about that this past year on our local CBS morning news. Oh, I see this is part 1, can't wait to read part two!

Funny, Mario. Nope, there's no way I'd want to eat fish that had been nibbling on people's feet! :)

Thanks, Cindy! I hope you enjoy part 2 just as much.

Wow! All those blogs that asked where I'd like to visit and I never thought of there, but your pictures are wonderful!

Fantastic stuff....thanks for sharing. Me = jealous!

Fabulous trip, fabulous photos! Thanks for writing this up and sharing it here.

Really enjoy your travel stories. Our son and his wife are in Cambodia right now. They just arrived there from Vietnam on an around-the-world trip.