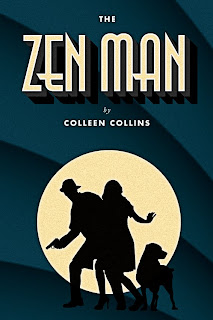 As promised yesterday, fellow Colorado mystery author Colleen Collins is visiting my blog today. To read her bio and see her photo, please page down to yesterday's post.

Above is the cover photo for her most recent book, The Zen Man, which is being released this month. Just as washed-up criminal defense attorney, life-long Deadhead (nicknamed “The Zen Man”), and current PI Rick Levine decides to get relicensed as a lawyer, he’s charged with killing one, who also happens to be his ex-wife, and ends up in the slammer with a half-million bail. Out on bond with 30 days to find the real killer, Rick and and his girlfriend Laura dig for dirt from Denver’s shady legal backrooms to the city’s tony corporate centers. Dodging bullets, trumped-up charges and the FBI’s unwanted intervention, they continue tracking key suspects who have motive…until they face a final, deadly encounter with the surprise killer.

Below is Colleen's guest article. If you leave a comment or question for Colleen, you'll be entered into a contest for a free copy of her Kindle book, How Do Private Eyes Do That? Good luck to everyone!

When Writing a Whodunit, Think of Dear ol’ MOM
(Motive, Opportunity and Means)
By Colleen Collins
Recently a writer friend of mine who’s written dozens of romance novels landed a book contract where the publisher asked for a “complex crime” at the core of the story. My friend contacted me, worried. “I’ve never written a crime!” she said, “can you give me any advice?” “Sure, think MOM,” I answered, “which stands for motive, opportunity and means.”

Let’s look at some ways a fictional sleuth might use MOM in a story:

Conduct witness interviews. There’s the direct questions a sleuth might ask, and which we often hear in movies, such as “Where were you at nine o’clock on the night of April 12, Miss Smith?” (opportunity). But also think about your sleuth asking questions that delve into a suspect’s character (motive), history of violence or peacefulness (means/motive or lack of means/motive), or knowledge about using a certain type of weapon (means). A sleuth might also interview other people who’ve seen that suspect use the same type of weapon or conduct certain violent acts.

Recreate the homicide event. Your sleuth might reconstruct the event at the scene of the crime to prove a person had access to a weapon (means) as well as opportunity. For example, the reconstruction might show how easily a suspect could have reached for the murder weapon. Or, conversely, that the suspect wasn’t tall enough to reach the weapon, strong enough to lift it, or maybe even literate enough to have read the instructions on how to use the weapon. As a lawyer, Abraham Lincoln once reconstructed a crime scene to prove that a witness couldn’t possibly have seen what she claimed to have seen because there wasn’t ample lighting to clearly see at the time the incident occurred.

Find an alternate suspect. Your sleuth might research other people who had motive, opportunity and means to commit a crime. For example, the sleuth might analyze someone’s character for motive (such as his/her history of outbursts toward the victim), look for clues tying another person to the murder weapon (for example, his/her knowledge of how to use that weapon), or establish someone had opportunity (by analyzing a person’s timeline).

A last point to keep in mind: a court cannot convict based solely on motive, opportunity and means. A lawyer must provide convincing proof of all three. Obtaining this proof is, of course, what your sleuth (a detective, private investigator, amateur sleuth) has been doggedly investigating, with the help of MOM, throughout the course of your story.

Thank you to Beth Groundwater for hosting me today at her blog. I’d like to give away a Kindle copy of How Do Private Eyes Do That? to one of today’s commenters. You don’t need a Kindle to download the book (Amazon provides a free, easy-to-download app for downloading the ebook onto your PC, Mac and other devices).


And thank you, Colleen, for that excellent article! I'm expecting to see lots of comments here, since Colleen is giving away such a great prize.
Posted by Beth Groundwater at 5:00 AM

Thanks, Colleen, for your clear writing and specifics about MOM (at first I feared the post might be about our real Moms' reactions to our mysteries - yikes!) and for providing such strong information that I'm already finding helpful in the mystery I'm working on. Love your background, and excited to get a chance to read your book!

Thank you, Beth, for hosting me as your guest blogger today. And thanks, C Goold, for your comments about the article -- I'm glad it's useful!

I'll be checking in throughout the day, answering any questions readers might have about MOM or private investigations in general.

This is cool. I have never attempted a mystery, although, I live in a small town and my mother was the court clerk for many year. I used to go for a while when I was in my teens. Talk about fodder for stories! The things people will say. No murders ever that I saw tried, but lots of character studies. Thanks for this insight. I might try to incorporate a mystery in an upcoming work now.

Thanks for tying things up so clearly. Debra

The acronym is so useful, if a little amusing. As a reader, I find these things interesting to look at. I have a question-on TV, the lawyers often say they don't have to prove motive, or something like that? is that accurate? I gather from books that it depends on the evidence? Just curious. Good luck with your book.I'm going to check on it now. Good title.

Thanks for your comments, C., Thea, Debra, and Lil, and good luck in the contest!

And thanks for guesting, Colleen! I've gotten the word out on Goodreads, Facebook, Crimespace, DOrothyL, yahoogroups, etc. Please check back for comments here tomorrow, too, from folks who get their yahoogroups on digest.

Hi, Beth, Hi, Colleen. Love your mom analogy. Perfect for writing a mystery. And speaking of mysteries, folks, check out The ZEN Man. Fantastic writing, with a great cast of possible who-dun-its taking place in wonderful Colorado of course. Felt like old home week with a mystery at its core and left me smiling!

To answer your question >>I have a question-on TV, the lawyers often say they don't have to prove motive, or something like that? is that accurate? I gather from books that it depends on the evidence?<,

Answer: Because we're talking lawyers, I asked one (who also happens to be my husband) to help answer this. Yes, it's accurate that lawyers don't have to prove motive. However, one can say a criminal defense attorney would look for motive in a practical sense, just not a legal sense. Also, a prosecutor would look ridiculous standing in front of a jury and insisting he/she is prosecuting someone for a crime for which the person had no motive.

Ultimately, one can't be convicted on motive alone. There must be admissible evidence that corroborates the prosecutor's theory of the case.

Donnell, thanks for your kind words about THE ZEN MAN. It'll be out any day now on Kindle and Nook.

Hi Thea, I bet you have a lot of fodder for stories hanging out at the courthouse with your mom.

fyi to others: It's really helpful as a mystery-suspense-thriller writer to visit court proceedings, all of which are open to the public (except adoptions and, in rare instances, cases where the judge orders the courtroom closed).

For example, when I first became a private investigator I visited numerous courtrooms to gain insight about types of cases, how lawyers work, how judges rule...how the wheels of justice work (or sometimes don't work).

This is a great perspective from the inside, Colleen. Thanks to you & Beth. I will be referring back!

Thank you so much for sharing this. So very helpful!

Thanks, everyone, for being part of my guesting "at Beth's place" today. As she mentioned there are yahoogroups' digests people will be reading tomorrow, I'll check back in on Wednesday for any more questions/comments.

Also, later on Wednesday I'll pick someone's name out of a virtual hat to win the eBook HOW DO PRIVATE EYES DO THAT?

Have a great evening, Colleen

Thanks for all your good info. I write thrillers, but need to use some of the same principals. I am going to be bringing 3 new books to the Epub world very soon. (2 novels--new, and one non-fiction from my back list)
Paul Hansen

Didn't see any other questions today, so I'll take this opportunity to say thank you to Beth Groundwater for being a wonderful host, and to everyone who dropped by.

Below is a link with an excerpt from How Do Private Eyes Do That?:

Excerpt:Mixing Business with Pleasure: PIs Getting Involved with Clients

Beth will later post the winner's name for the free eBook How Do Private Eyes Do That?

Since you don't have an email address on your user profile, C. Goold, could you please email me from the "contact me" page of my website, bethgroundwater.com, and give me your email address? I'll pass it on to Colleen.

Thanks, everyone, for your comments & entries!

A good reminder and a nifty acronmym!

Coleen--It's great to hear from a real private eye. What interesting backgrounds you and your husband have! I just bought "How Do Private Eyes Do That?" for my Kindle and look forward to having it as a reference for my writing.

Thanks Beth, for having Coleen as a guest.