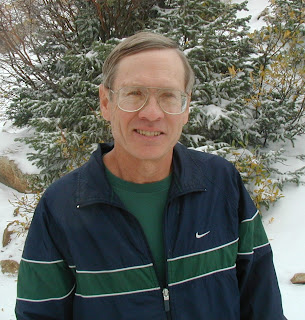 Tomorrow, fellow Colorado mystery author Mike Befeler will be a guest on my blog. In the May, 2008, issue of the AARP Bulletin, Mike was identified as one of four authors in a new emerging mystery sub-genre. Harlan Coben, president of Mystery Writers of America (MWA) stated, “We’ve just scratched the surface on geezer-lit. It could be the next frontier in crime fiction.”

Mike Befeler turned his attention to speaking and fiction writing after a career in high technology marketing. His debut novel, Retirement Homes Are Murder, was published in 2007. The second novel in his Paul Jacobson Geezer-lit Mystery Series, Living With Your Kids Is Murder, was a finalist for the Lefty Award for the best humorous mystery of 2009. The third book in the series, Senior Moments Are Murder, was released August, 2011. Mike is active in organizations promoting a positive image of aging and is Vice President of the Rocky Mountain Chapter of MWA. He is an acclaimed speaker and presents “The Secret of Growing Older Gracefully—Aging and Other Minor Inconveniences,” and “How to Survive Retirement” to service organizations and senior groups. He grew up in Honolulu, Hawaii, and now lives in Boulder, Colorado, with his wife, Wendy.

In his guest post tomorrow, Mike answers my interview questions, and I'm sure you'll be intrigued by what he has to say. Then, feel free to ask him some questions of your own in the comments.
Posted by Beth Groundwater at 5:00 AM

Looking forward to it. Us fellow geezers need to stick together.