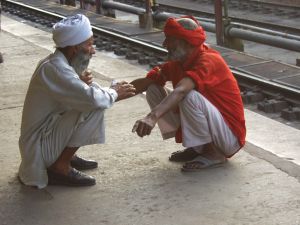 As promised last Friday, during the rest of September I'll be sharing some notes here from my "The Art of Writing Dialogue" workshop that I've presented to many writing groups. I presented the first lesson on Mechanics, the nitty gritty little details of writing dialogue, on Monday. The second of three lessons on Mechanics will be today, with the next six "rules of thumb."

6. Don’t let your characters give speeches to each other. The dialogue should flow back and forth in a natural give and take. If a dialogue paragraph is more than three lines long, it’s probably too long. Insert a question or reaction remark from the other character in the middle to break it up. You may find that one of the middle sentences of the speech can be reworded into a question from the other character.

7. Remember that people breathe while speaking, so insert natural breaks (pauses, commas, periods, actions) where your characters would take a breath. If a phrase is too long for you to say out loud without taking a breath, break it up.

8. Don’t have a string of more than five dialogue paragraphs in a row without a tag. At that point, the reader gets confused about who is saying what, even if just two characters are talking. If more than two characters are conversing, you’ll likely need to tag almost every line of dialogue.

11. Leave out the qualifiers, stammers, and pause words that people use in everyday speech, but that don’t move the story forward.

Love these tips, Beth! Thanks