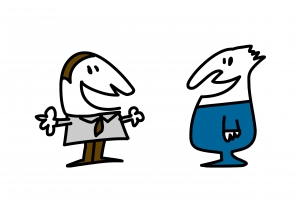 I will be doing a fair amount of traveling in September, so I made the decision not to have guests on my blog for the rest of the month because promoting and managing their posts will be difficult. Don't worry, though. I have a full slate of guests lined up for October! In the meantime, I thought I'd share some notes from my "The Art of Writing Dialogue" workshop that I've presented to many writing groups. I hope my blog readers who are writers find these posts to be useful, and I hope my blog readers who are readers will gain an appreciation for how difficult dialogue can be to write.

I'll start with definitions today, so we're all on the same page:

Dialogue – A conversation between characters in a narrative. It can and should include thoughts, emotions, actions, gestures, facial expressions and more in addition to speech.

Dialogue tag - A noun or pronoun identifying the person speaking and a speech action verb (said, asked, replied, shouted, etc.). Also called an attribution or identifier. It should always be written with the noun first and verb second.

Talking Heads – When a passage of dialogue contains just speech ping-ponging back and forth between characters and not much else.

Informational Dialogue – When two characters who already know something still tell each other about it, as a clumsy device to give the reader the information.
“As you know, Betsy, our mother is sixty-four.”
“Yes, and our brother Bill was born three years after I was.”

Direct Address – When one character calls another one by name within the dialogue.

Salt and Pepper – The boring bits of dialogue that we use in everyday life, such as “Hello, how are you?” or “Please pass the salt and pepper.” that should be left out of fiction dialogue.

Business – The narrative, thoughts, gestures, actions, facial expressions, and so on that flavor dialogue, giving it emotional context and revealing the characters’ motives and conflicts in more depth than words alone can convey.

That's it for today! Tune in next week for some how-tos on Mechanics, the nitty gritty little details of writing dialogue.