Kicking Off the Ski Season With a Bang!

A couple of days before Halloween, I received an email saying that I had won a contest I had entered for two VIP passes to ski with US Ski Team members on their downhill training course at the US Speed Center at Copper Mountain. The US Speed Center is a very early season training center for the US Ski Team that includes downhill, giant slalom, and slalom courses. 100 of the 500+ Copper Mountain pass holders who entered the contest won the passes. In the photo below, I'm holding mine on the Super Bee lift at Copper. 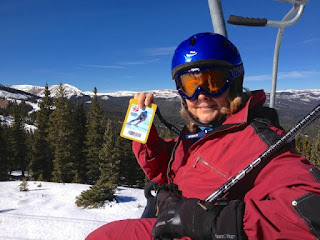 My husband and I arrived around 9:15 AM to register, eat a donut (Neil, not me), chat with others there, and suit up for skiing. Cramming those feet into ski boots for the first time of the season is always a treat! At 10 AM, after some speeches by Copper Mountain and US Ski Team honchos, the alpine skiers from the US Ski Team who would be spending the day with us were introduced. Then we were let loose on the mountain. In the photo below from the Summit Daily News the next morning, I'm in the red unisuit with black shoulders on the far right--very small. 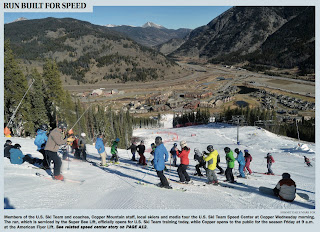 For our first run down the course, groups of 10-20 "Speed Center VIPs" were paired up with one or two ski team members to explore the course as a group. At various points along the way, we stopped where ski team coaches waited to give us a briefing on the next section of the course. We were told how downhill racers were coached to tackle the course, but this gal did NOT make any jumps or tuck and ski flat out. It was still fun to pretend, though. :)

After the first run, we were free to continue to ski the course from the top of the mountain to the bottom off the Super Bee chair on our own, and I made a total of 5 runs. Along the way, I was able to get some photos of me with ski team coaches (first photo below) and women racers (second photo below). Then we gathered in JJ's Tavern in Copper Station for a yummy free lunch. 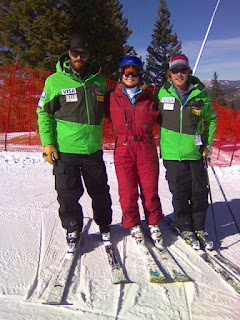 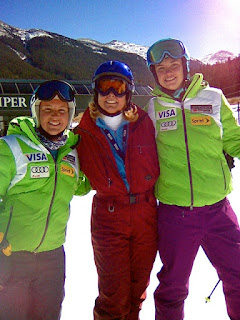 What a great early introduction to the ski season, which officially starts today at Copper Mountain. Thanks, Copper!!
Posted by Beth Groundwater at 5:00 AM