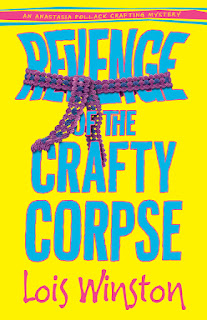 As promised yesterday, fellow mystery author Lois Winston is visiting my blog today. To read her bio and see her photo, please page down to yesterday's post. The photo above is the cover for Lois's January 8th release, Revenge of the Crafty Corpse, the third book in her Anastasia Pollack Crafting Mystery series.

In the book, Anastasia Pollack’s dead louse of a spouse has left her with more bills than you can shake a crochet hook at, and teaching craft classes at her mother-in-law’s assisted living center seems like a harmless way to supplement her meager income. But when Lyndella Wegner—a 98-year-old know-it-all with a penchant for ruffles and lace—is murdered, Anastasia’s cantankerous mother-in-law becomes the prime suspect.

Sounds like a great read to me! Below is Lois's guest article. Please leave a comment for her, and if you have a question for her, ask it!

The Character Readers Love To Hate

The idea for my Anastasia Pollack Crafting Mysteries came about from a combination of events. My husband had recently lost his job, and although he’s nothing like Anastasia’s husband (thank goodness!), it sent me into a tailspin of worry regarding money. I was also dealing with massive mother-in-law problems at the time. On top of that, when I first started contemplating the series, The Sopranos was still airing on HBO. I’m a Jersey girl. How could I not set a mystery in my home state and involve the Mafia in some way? All of these elements came together to form the basis for Assault With a Deadly Glue Gun, the first book in the series.

The premise for the series is that when Anastasia’s gambling-addicted husband permanently cashes in his chips in Las Vegas, her life craps out. She’s left with two teenage sons, a mountain of debt, and a loan shark demanding fifty thousand dollars. Over the course of the series, Anastasia looks for ways to whittle down the massive debt she’s inherited, a task made more difficult by her spend-thrift mother, a self-proclaimed descendant of Russian royalty, and her curmudgeon mother-in-law, a card-carrying communist, both of whom live with her.

And did I mention the dead bodies? It’s not like Anastasia works in law enforcement. However, ever since her husband’s death, she keeps stumbling across murder victims, hardly something a craft editor expects.

I’ve always been drawn to quirky characters. They make me laugh. It’s the reason I write humorous amateur sleuth mysteries. I think we need more laughter in the world. I get enough of the grim and gritty from my daily newspaper and the evening news.

I don't often base my characters on people I know, but when I do, I usually take traits from various people, exaggerate them, and blend them together to create a unique character. Let’s face it, most people aren’t as quirky in real life as they are on the printed page.

The exception to this is Lucille, Anastasia’s mother-in-law. With a few minor differences, Lucille’s personality (along with her communist leanings) mirrors that of my now deceased mother-in-law. Lucille is the character readers love to hate. Some readers want me to kill her off; others love her, probably because they see some of their own mothers-in-law in her. I chalk this up to misery loving company.

There are now three books plus a short story in the series. Yesterday was the official release date of Revenge of the Crafty Corpse. In this book, Anastasia is moonlighting on weekends at the rehab center where Lucille is recovering from surgery. But when Lucille’s 98-year-old roommate turns up dead, Lucille becomes the prime suspect in her murder. Upon discovering that the roommate’s scandalous craft projects—along with her scandalous behavior—made her plenty of enemies, Anastasia sets out to find the real killer before her mother-in-law winds up behind bars.

Now I know, given readers’ feelings toward Lucille over the way she treats Anastasia, many will wonder why Anastasia would bother. After all, she could be rid of Lucille permanently. But no matter how huge a pain in the derriere Lucille is, Anastasia can’t sit by and let her go to prison for a crime she knows Lucille didn’t commit. Besides, if she did, I’d hardly have a plot, would I?

Thanks, Lois! Now, readers, do you have a favorite mystery character that you love to hate? If so, tell us about it. Also, for those who have read Lois's books, what's YOUR opinion of Lucille?
Posted by Beth Groundwater at 4:00 AM

This sounds like a fun series. I haven't read the books yet, but after reading this you can bet I will. Thank you for a fun post.
Marja McGraw

Thanks, Marja! I hope you enjoy them. Please let me know if you do. I love hearing from readers.

Ha, Love your inspiration for the series. In my mind you wrote this book out of self-defense, an unemployed husband a MIL who caused you grief. I'm curious how much of this was based on your need to tell a great story and how much was therapy?

The truth comes out, Donnell. It was either get even on paper or commit murder. At least it started out that way. Now I don't dare kill off Lucille.

I know Lucille is essential to the series, but she could go someplace far far away only to be heard via telephone.

This cleverness is quite a hoot.

And you can't count this a post to enter the contest as my neurons can't pull up a character - to hate - to suggest. But fabulous idea.

It's fun to "meet" via, Beth, who I already "know" through SinC, a writer who has these characteristics that I share-

craft success - not so much, but I admire folk artists & lever crafts & aspire to create something unique from where we live, North Florida,,, Supplies are moss & osyter shells...

I didn't know of this clever series so now I'm going to become a new reader of Lois Winston.

Many thanks Beth & Lois

Thank you so much, Jan! I hope you enjoy the books.

Thanks so much for visiting, Lois, and if anyone has a comment to add today, don't hesitate. Lois and I will be reading them today, too.

Thanks for inviting me, Beth.