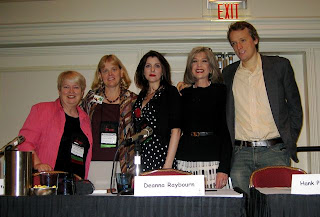 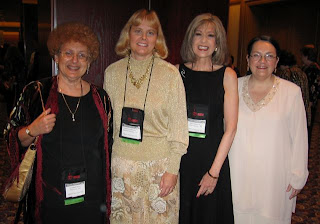 The New Author's Breakfast was at 7:15 am Saturday morning, and I was there to support my fellow new Guppies and Five Star authors and listen to their pitches. It was nice not to have a give my own speech, since I'd done it last year--just as it was nice not to have to go through the unnerving Malice-Go-Round pitch session the day before. I sat in on the "Simply the Best" panel of nominees for the Best Novel category of the Agatha Award, then came my own panel of Best First Novel nominees, "New Kids on the Block." (See the first photo above.) Our moderator, Margaret Maron, obviously took a great deal of care to prepare for the panel. She made us all look so good! Then came my signing and the chance to talk to fans and sign their books What fun! I'm still new enough at this that I LOVE talking to people who have read and enjoyed my book.

Next was lunch with thirty-some Guppies at the Sbarro's restaurant in the Crystal City Underground. Lots of photos were snapped and stories were swapped. The afternoon was spent listening to the Ink in their Blood panel about reporter protagonists, chatting in the hallways, and listening to Robert Barnard's delightful interview with Lindsey Davis. I hadn't read any of her books before, but I'm definitely checking out the Falco series now! Fellow Five Star author Maria Hudgins let me change into my party dress in her room, then it was off to the banquet.

A crowd of paparazzi mobbed the four Guppies nominees and must have taken dozens of photos (see the second photo above). ;-) Poor Deb Baker. She gave all of us sitting at her table small dolls as favors, reminding us of her doll collecting series. One poor dolly ended up dangling by a ribbon noose from the table number sign. Demises of the others via water-glass-drowning, candle-burning and other nefarious means were discussed, but not executed. ;-) The anniversary speeches were all entertaining, but there were so many of them that by the time the Agatha Awards were announced, I was stifling yawns, not from boredom, but from sleep deprivation kicking in. I was glad to head back to my friends' home right afterward, pack up, and roll into bed.

Sunday kicked off with the Sisters in Crime breakfast at 7:30 am, followed by the Agatha Christie's Legacy panel where Denise Swanson kept the audience in stitches, some hallway chatting time, the Women Who Sleuth Too Much panel, and Robert Barnard's interview with Peter Lovesey. All too soon, it was time for the final tea. I had to quickly gobble down some food--making sure I got my chocolate covered strawberry and chocolate mousse in a teacup-shaped dark chocolate shell. Yum! Then I had to dash off to the airport, but I did get to see Liz Zelvin's lovely hat featuring a bobblehead figure of Edgar Allan Poe, a bat, and a red rose, that won the "Most Creative Hat" award in the hat contest. And, on the two plane rides and long layover in Chicago, I polished off Hank's PRIME TIME. A lovely way to end a lovely weekend!
Posted by Beth Groundwater at 7:30 PM