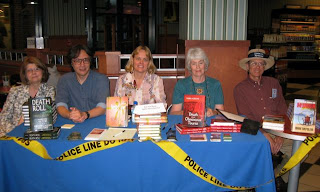 The 2008 Malice Domestic conference was a special one for me, not just because it was the twentieth anniversary, but also because I was an Agatha Award nominee for Best First Novel. So, I basked in the glow of congratulations and praise until the end of the Saturday banquet. Then, when Hank Phillippi Ryan won, I could celebrate that a fellow Sisters in Crime Guppies chapter member had won--and I didn't have to give a speech. :-) I came home with some Guppies books: Hank's PRIME TIME and FACE TIME, both autographed, Liz Zelvin's DEATH WILL GET YOU SOBER, signed of course (Liz was my Malice-Go-Round pitch mate last year), and the MURDER NEW YORK STYLE anthology with signatures from five Guppies whose stories were included in the volume, including Liz's and Nan Higginson's Agatha Award-nominated stories. I'm looking forward to reading them all, and I expect that anthology to become a collector's item as the authors become big-name mystery authors!

To save money on this trip, I used frequent flyer miles, which meant connecting through Chicago's O'Hare airport versus flying direct, and I stayed at the home of friends in Arlington, VA. They received many of my conference bag books as a hostess gift. All four of my flights were delayed, resulting in me arriving at my friends' home at midnight on Friday and arriving at my home in Colorado Springs at midnight on Sunday. Thank goodness I didn't turn into a pumpkin either time! But, my butt was sure dragging yesterday.

I did get up in time on Friday to breakfast with some Mystery Babes at 8:30 am, and finally got to meet Pari Noskin Taichert in person after corresponding via email for years. I'd missed her at LCC the month before because she'd been sick and in her room a lot of the time. Then came the chores of registering, dropping off my silent auction gift basket, checking in consignment books with Tom & Enid Schantz of Rue Morgue (good thing, too, because they sold ten of them!), signing myself and my two escorts (fellow Five Star authors Mike Befeler and Michael Allen Mallory) up to sit at Deb Baker's banquet table, etc. After a quick granola bar and cup of tea lunch, I went off to the Sisters in Crime chapter training session from 1-3 pm. Being the only board member (I'm secretary) from the Rocky Mountain chapter in attendance, I was directed to take good notes. The session was very informative and lively, and I found it to be immensely useful. Plus, I got to meet chapter board members from all over the USA!

After resting with my feet up a bit and looking out for DorothyL and 4MA members, I headed for the Opening Ceremonies, where I received my suitable-for-framing nominee certificate. After a dinner of munchies from the reception, five of us Five Star authors headed to the Clarendon Barnes & Noble Booksellers store for a Malice Domestic conference kick-off signing (see photo above). We have a tale to tell about getting lost and finding every screwy and confusing street and intersection on the "short 8-minute drive" from the hotel to the store. We made it in the nick of time and quickly set up to start talking to customers. Too tired after that to stay awake for the Murder On the Air program, I returned to my friends' home to chat with them briefly then collapse on my bed. I was their "mystery guest" because I left every morning before they got up and returned late at night. I'll talk about Saturday and Sunday in my next post.
Posted by Beth Groundwater at 7:03 PM