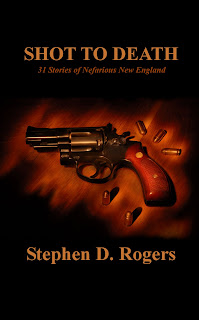 Here are some blurbs for Stephen D. Rogers' recently released anthology, Shot to Death, which contains thirty-one satisfying stories of murder and mayhem.

"Put yourself in the hands of a master as you travel this world of the dishonest, dysfunctional, and disappeared. Rogers is the real deal--real writer, real story teller, real tour guide to the dark side."
- Kate Flora, author of the Edgar-nominated Finding Amy and the Thea Kozak mysteries

"Shot to Death provides a riveting reminder that the short story form is the foundation of the mystery/thriller genre. There's something in this assemblage of New England noir to suit every aficionado. Highly recommended!"
- Richard Helms, editor and publisher, The Back Alley Webzine


"Makeda entered the lobby, stamped the snow off her sneakers, and blew into her cupped hands, wincing when she saw how her honey-colored skin had cracked from the cold."
- INN

So begins one of the 31 stories contained in Shot to Death (ISBN 978-0982589908). Within that beginning lurks the ending to the story and everything that happens between the beginning and the end. Or at least it seems that way to me.

Makeda isn't prepared for the weather. Her skin actually cracked, which means the cold and snow are foreign. She's in unfamiliar territory, not even taking the time to buy gloves to protect her hands, which tells me she's on the run.

The structure of the sentence doesn't emphasize the lobby, a possible haven of safety and warmth. Instead, the sentence emphasizes "the cold."

She arrives and she doesn't. Whatever the hotel (no, motel) could represent, it doesn't represent a chance to let down her guard. This is not about rest and relaxation, not about respite. Instead, Makeda is going to be running in place.

We don't see the lobby in that opening sentence. More than that, we don't see other people. Makeda is alone. She is cold, alone, and wounded (if that's not too strong a word to describe her hands).

Whatever Makeda has done, she has my sympathy. Whatever she does, she's going to be left in the cold.

All that remains is the writing.


Wow! Beth here again. That reminds me of a software project manager I had once, who jokingly said after the design was complete and before the coding began, "All that remains is implementation details." And it's in those details that good writing--and reading--is born.

For a chance to win a signed copy of Shot to Death, go to Stephen's website, click on "WIN" and submit your completed entry. Then visit his blog tour schedule here to see how you can march along on his tour and catch up on the stops that preceded my blog.

And then come back here to post your comments. Phew! Remember that Stephen D. Rogers is a writing instructor, so if there's something you're stuck on or some fine point about writing that you've always wanted to know, now's the time to ask.
Posted by Beth Groundwater at 6:00 AM

A long (long) time ago, when I was first learning how to write, I decided the best way to learn how to write well was to study software development.

Now, every time I sit down to write, my brain freezes.

Great scene ... you inspire me Stephen :)

This is really intriguing. I love short fiction, and it isn't done enough. Thanks, Beth, for this interesting author.

I'll expect to see something new from you by the end of the day. :)

Thanks for the support.

And my brain freezes nowadays when I think about writing code, Stephen, since it's been almost 11 years since I retired! I have a writing question for you. Do you think it's important to set the mood for your story (humorous, dark, bittersweet, etc.) in the first sentence? And what are some ways a writer can do that, if so?

Correct word choice is critical to making that happen.

Enjoyed the analysis of that opening. Makes the point that writers should be aware of every detail and how that detail relates to the story or the character. If it doesn't, perhaps it shouldn't be there.

Exactly. And if there's a detail you want to keep for some reason, come up with a purpose for it to remain.

Anyone brave enough to submit a first sentence for Stephen to analyze? ;-)

Here is my first couple of sentence of my first short story in ten years. Critique away. I would love the feedback.

What was I doing in a church? Jesus’ kindly eyes from a large, mass-produced portrait were boring into me. I tried to turn on the Lord’s son only to be drawn back. I stood in front of twenty blue-haired women perched on metal folding chairs, canes and walkers scattered to the side. I wondered if I was a moving blur in front of their rummy eyes instead of a thirty-something crime reporter asked to speak to a ladies group.

Of course I'll analyze the opening as if I was going to write the story, which means I'll approach the sentence with the history I bring to the perspective. Which is to say that What follows may not be applicable to your story or how you'd write it at all.

"What was I doing in a church?" Fish-out-of-water is a great setup, for it immediately makes the reader a partner. Feeling out of place is an experience that's familiar to probably all of us.

Why is the narrator there? The narrator's choice? Someone else's? What does the concept of church mean to the narrator, and has it always meant that?

Me being me, I'd set the entire story in the church, but I like a arc that grows out of the first sentence.

At the end, will the person feel more connected to the surroundings or still as much a stranger? The word "kindly" from the second sentence makes me think the narrator will find peace by story's end.

Stephen: Great comments! The whole story is in the church and your assumptions with the writing were all accurate and what I was trying to portray! The questions raised are mostly answered at the end. Thanks so much, Wendy

I hope you found my comments encouraging.

Yes I did. It was great. Thank you!

So have you finished the story? Submitted the manuscript?

It is in the final editing phase (The one I hate the most!) Then I will print it myself as a fundraiser for my church. After that I plan to create a kindle file and have it be a free down load as a way to push sales for my second book that will be out in June which features the main character.
Wendy

Cool. Best of luck with it!