It's taken me longer than I wanted to get this post up on my blog, but my photographer hubby came home from our travels with a head cold that turned into a sinus infection with fever, which incapacitated him. He's on antibiotics now and feeling much better, so he's started processing the photos that I've picked out from our trip to share with you.

We went to Moab, Utah so I could conduct research for the third book in my Rocky Mountain Outdoor Adventures mystery series starring whitewater river ranger Mandy Tanner. In that book, Mandy and her lover and outfitter business partner, Rob Juarez, will lead a multi-day rafting trip down 100 miles of the Colorado River in Utah, through the stillwaters of Meander Canyon and the class III and IV whitewater rapids of Cataract Canyon, one of the most remote whitewater rafting canyons in the United States. So, of course, I wanted to take that same trip.

I signed my husband and I up to take a 5-day trip down the Colorado River with Tag-A-Long Expeditions, a Moab-based adventure outfitting business that I highly recommend. The week before we showed up in Moab, I called with questions, one of which was how many people would be taking the trip with us. The answer was none. September is the end of the rafting season, and no one else wanted to commit to such a long trip at that time. Tag-A-Long was still willing to take us on the 5-day trip in an oared raft. But they asked me if I'd be willing to take a 3-day trip on a motorized J-rig instead, because they had other clients signed up for the shorter trip. Along with refunding us the price difference for the shorter trip, they threw in free 1-day expeditions to other locations for the two days we'd be giving up. I explained that I was taking the trip for book research and I needed to visit and photograph all of the campsites and lunch spots where outfitters normally stop on a 5-day trip. They were happy to accommodate my request.

So, today's post will cover our first 2.5 days in Moab, our arrival day and the two 1-day expeditions before we started on the 3-day trip. Tomorrow, I'll post photos from the 3-day trip. Below is a photo of Milt's, a local diner that I will feature in the book and where we ate yummy shakes and burgers and some awesome tater tots. The next photo is from the local high school's homecoming parade the afternoon we arrived, with a jeep dressed up as a "Red Devil" (their team) crushing the opposition "Rams" symbolized by a Dodge Ram with balloon horns. Very creative, I thought. 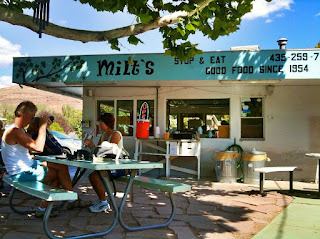 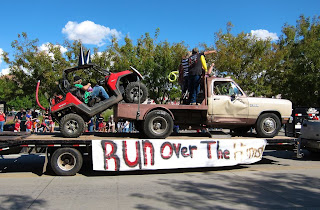 The next set of seven photos are from the 1-day oared raft trip we took through Westwater Canyon, which is on a section of the Colorado River northeast of Moab. It was a boatload of whitewater thrills and fun, even though the day started out overcast and blustery cool. The first photo shows the guides outfitting the three rafts at the put-in, and the second shows my hubby and I with our splash jackets and lifejackets on, ready for adventure. 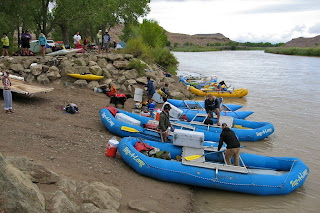 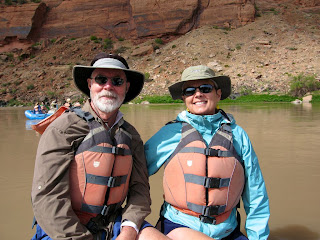 The next photo shows the first big rapid we hit and the one after that shows our lunch stop. In the third photo, try to find the other raft in the middle of the rapid. It shows you the large scale of these class III and IV rapids. 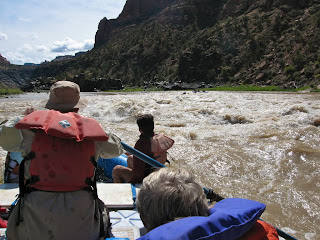 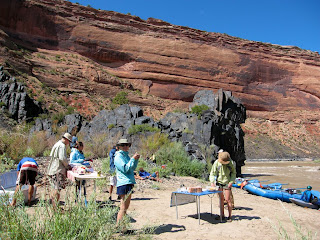 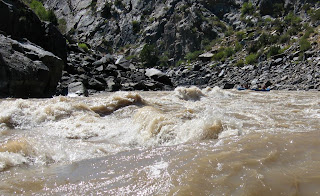 The next photo shows the "Room of Doom" whirlpool eddy off to the right of the rapid between high rock walls. The surface of the water in that eddy is much lower than that in the rapid, with an "eddy fence" of higher water between the two. In high water, especially, if a raft gets trapped in that eddy, it's impossible to power back over the eddy fence into the main river. Rafters have to abandon the raft, climb out along the canyon wall to a quiet spot farther down the river and get picked up by other rafts. Then the company has to come back with a motorized launch and use ropes to pull the raft out. And just in front of the eddy fence is a huge "hole" (dangerous vertical whirlpool) that has to be avoided. The line to run with the raft is between the sharp rock in the center-left and the hole. 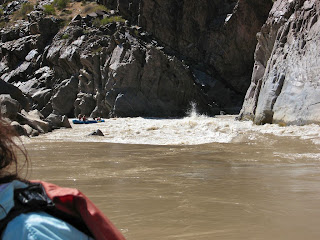 The last photo in this set shows my hubby and I resting on the stillwater section at the end of the trip in the sun that thankfully appeared in the afternoon. A fun day! 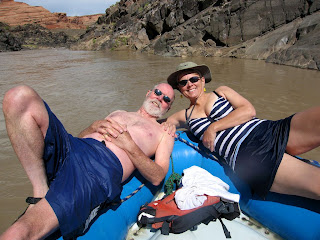 The next set of eight photos are from our next 1-day expedition with Tag-A-Long, four-wheeling out to remote Horseshoe Canyon (sign below), then hiking down into it to view panels of native American rock art. This rock art is pictographs, images painted on the rock, versus petroglyphs, which are chipped into the dark desert patina on the rocks (you'll see some of those tomorrow here). 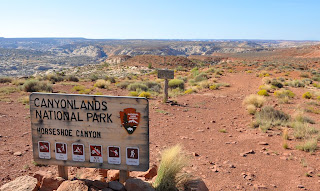 The photo below shows some really cool-looking cryptobiotic soil, a crust formed by a mix of lichens, mosses, fungi, algae and cyanobacteria which secrete a mucus that holds clumps of soil together. These teeny tiny organisms do a huge job of retaining water and controlling erosion in the desert environment. 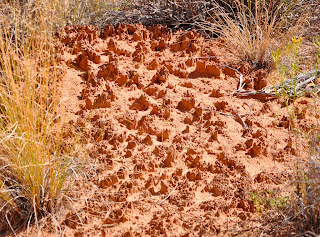 The next three photos are of different panels of rock art in the canyon. 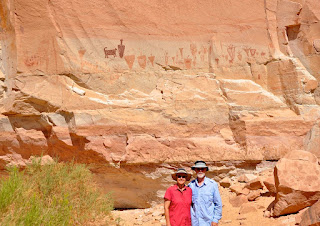 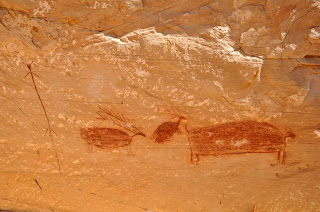 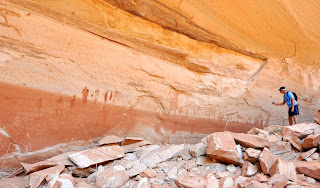 The photo below shows our hiking group on the floor of the canyon, picking our way through quivering, jelly-like quicksand mud that thankfully was only a few inches deep. 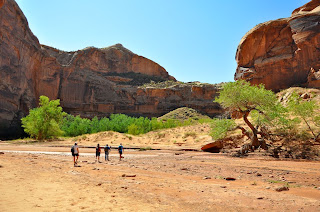 One more photo of some interesting ceremonial figures in the rock art, then the last photo shows four of us back up on the rim of the canyon after hiking out. A very interesting day that provided some "local color" that will go into the book. More tomorrow! 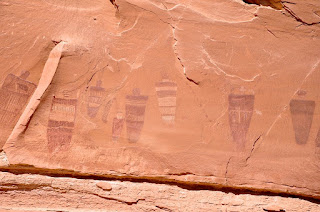 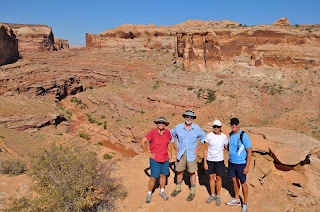 Posted by Beth Groundwater at 9:14 AM

Great photos and info on yoru trip Beth. Thanks so much. I've always wanted to whitewater but am still too afraid - perhaps I can start with a gentle trip :)

Hi Loni,
Thanks for you comment. Yes, there are gentler whitewater trips available that you can take all over the US. Look for one with no rapids bigger than class III.

WHAT fantastic pictures, Beth!! We were just in Moab and I well remember that alien, red landscape. But the rafting adds a whole other dimension. I would love to do some of that--and September seems like a great time for it!

Hi Jenny,
Thanks for your comment. September is indeed a good time because it's a little cooler than the hot summer months of June - August. Also, the water levels are lower, so the rapids aren't quite as scary. :)

Wonderful trip! Thanks for the account and the great pictures, Beth!

Margaret said...
This comment has been removed by the author.
12:47 AM

Wonderful photos. Can hardly wait for book three. That's what I love about mystery books. They take you to places you would probably never go and give you a wonderful virtual experience. Closest this flatlander (Illinois) got to areas such as those you photographed was on an Amtrak train from Chicago to Salt Lake City. Glad my family was on a train rather than walking or floating about.
Margaret Franson

Thanks for your comments, Kaye and Margaret! Similar to you, Margaret, I often read fiction to take me to foreign places or historical periods that I can't visit in person. I love to watch The Amazing Race, too, to see all the different countries the contestants go to. Some make it onto my travel bucket list, then I start making plans to go myself.