As I posted yesterday, my hubby and I recently traveled to Moab, Utah so I could conduct research for the third book in my Rocky Mountain Outdoor Adventures mystery series starring whitewater river ranger Mandy Tanner. In that book, Mandy and her lover and outfitter business partner, Rob Juarez, will lead a multi-day rafting trip down 100 miles of the Colorado River in Utah, through the stillwaters of Meander Canyon and the class III and IV whitewater rapids of Cataract Canyon, one of the most remote whitewater rafting canyons in the United States. So, of course, I had to take the same trip!

Here are some photos from that amazing journey. First are some petroglyphs, rock art carved by ancestral Puebloans into the desert patina of the cliffside that could be seen along the road to our put-in at the Potash Boat Ramp west of Moab on the Colorado River. 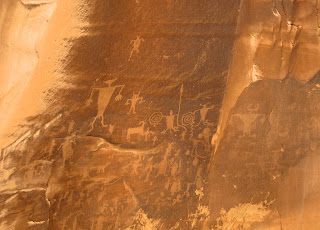 The photo below shows boatman Dave and me loading the J-rig, a configuration of two large pontoons with a metal platform slung between them that is powered by an outboard motor in the back. Beside the J-rig is a high-speed motorized launch from Tag-A-Long (the highly recommended outfitter we used for our trip) that drops and picks up canoes and paddlers from various places in Meander Canyon. The next photo shows an early stop in our journey at a petrified forest site below Dead Horse Point, with river guide Justin peering at one large, long log. 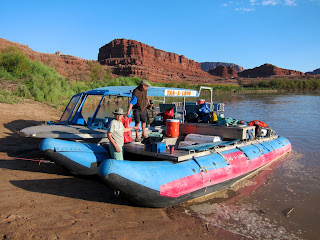 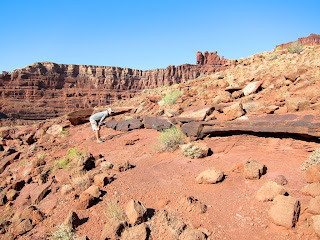 The photo below is of a party flotilla we encountered in Meander Canyon (heavy drinking involved, I'm sure!), and the one after that is of a ancient granary across the river from Lathrop Canyon. The third photo shows the "bathtub ring," a white layer of rock that is very striking in parts of the canyon. 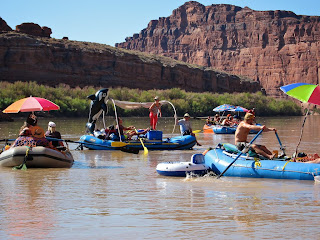 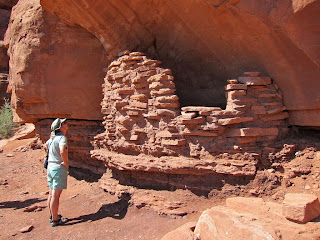 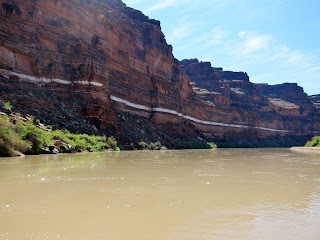 The next two photos are from our hike over a short intersection between two loops in the Colorado River, while Dave and Justin took the boat four miles around the meander to meet us on the other side. The first photo shows me climbing up on one side and second shows the two of us overlooking the other side and the beach where we camped that evening. The third photo shows the kitchen set up at that camp and the last is of sunset bathing the rocks with beautiful orange light. A wonderful first day! 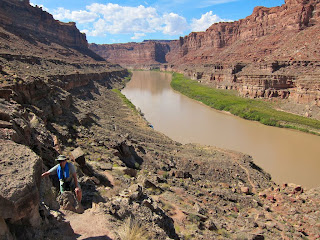 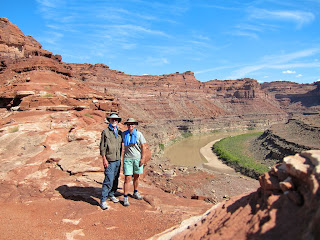 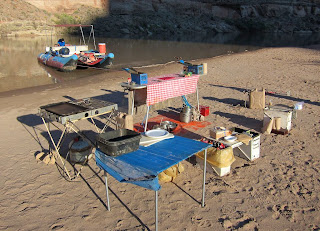 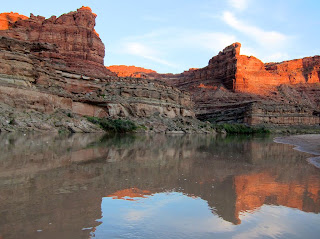 On the morning of the second day of our 3-day trip, we motored down to the confluence with the Green River, which swelled the volume of the Colorado River to about 12,000 cfs (cubic feet per second). For the Cataract Canyon section, this was a fairly low volume of water, which can rise to around 60,000 cfs in spring flood season. Below the confluence, we pulled in to register at the danger sign for our campsite that evening (see below). 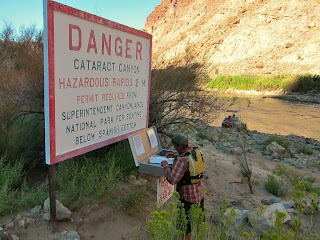 The next stop was at a large flat beach area called Spanish Bottom, where we hiked to the Doll House formation at the top of the canyon rim after going through a field of moonflowers (see below). These plants are also called sacred datura or jimson weed and were used by the native Americans to induce hallucinations during ceremonies. The second photo shows part of the Doll House formation at the top and the third shows the view down to the river from there. 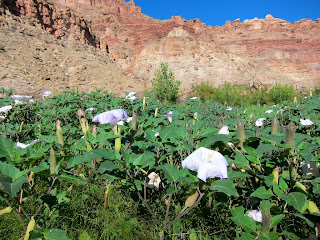 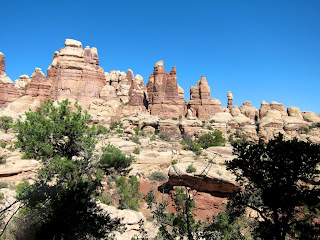 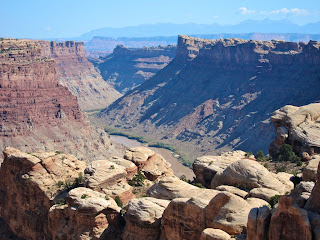 Now, on to the rapids! Cataract Canyon contains 28 major class III or class IV rapids within its 30 miles. We didn't get a whole lot of photos of the rapids because we were supposed to hold on with BOTH hands when we went through them. I told my dear hubby I'd rather he'd hold on than snap photos for me, so the ones he took were just before or just after running a rapid. 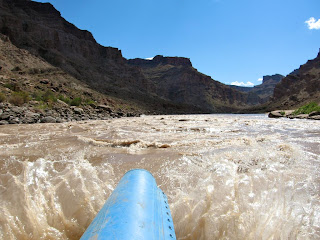 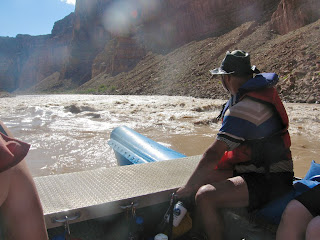 We pulled out for the night after rapid 20 and just before the next three rapids, which are called Big Drop 1, 2, and 3. We walked down the river bank to see what we had to look forward to the next day. Below is a photo of Big Drop 1, and here's a link to a video of it, with myself and one of my fellow rafters added for size: http://www.youtube.com/watch?v=pTqh6OgR9rA 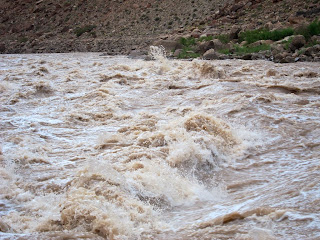 The last photo is of our campsite on Big Drop Beach the second night. I plan to post photos tomorrow from the last day of the rafting trip and of the next day we spent in Moab at Canyonlands National Park. 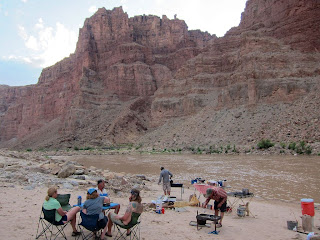 Posted by Beth Groundwater at 6:00 AM

Wow! I never knew research could be so exciting. With the photo documentation you've got,I'd say that the entire adventure qualifies for a tax write off.

Oh yeah, this was a business expense! Along with my hubby's excellent photos, I've collected pages and pages of notes and came back with maps, books and park fliers on all sorts of topics. Those poor river guides had their brains picked clean, and I told them their names would be in the Acknowledgments page of the book.

These are gorgeous. Thanks for sharing! -- BrendaW.

Ooh, you were in my favorite part of the country. I'd love to sign on as your gofer!

Thanks for your comments, Brenda & Kathy! Sorry to say, Kathy that I've already got a grand gofer--my hubby who took all these great photos.