Photos from a Book Tour - Part One

Last Saturday I concluded an eight-day book tour with fellow mystery author Ann Parker, whose historical mining era mysteries are set in Leadville and Manitou Springs, Colorado. Ann was promoting the fourth book in the series, Mercury's Rise, which was released in November, and I was promoting the November re-release of A Real Basket Case, though I think I signed just as many copies of Deadly Currents.

After flying in to Denver, Ann met me at the Denver Press Club Thursday evening, where we both attended a meeting of the Rocky Mountain Chapter of Mystery Writers of America. She rode back with me in the Colorado Springs carpool, and we used my Colorado Springs home as a base of operations for the next three nights. Our first event Friday evening was a wine, cheese, and chocolate signing at Black Cat Books in Manitou Springs, the setting for Mercury's Rise. The photo below was taken by Doris McCraw at the event. 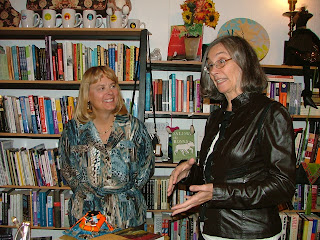 Saturday we breakfasted with researchers who helped Ann with her book, then we attended an authors tea at the Pikes Peak Library for Mara Purl and Margaret Coel. Our own next event was a shift at the Pikes Peak Writers Fundraiser Booksigning at the Barnes & Noble Booksellers location in north Colorado Springs late Saturday afternoon. The first photo below shows us with Mark Stevens, who signed before us, and the second photo, taken by Doris McCraw again, shows Ann and I toward the end of our two hour shift, still laughing and having a great time. After our signing, we went to a launch party for my friend Donnell Bell's debut novel. A full day! 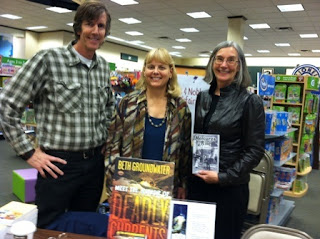 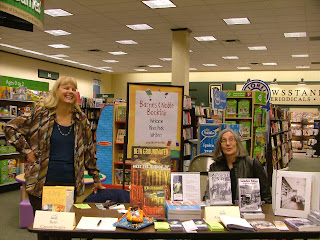 Sunday marked the first of two snafus that could have been disastrous. Ann and I loaded up my Prius with our luggage and books, and when I turned the ignition key, nothing happened. I looked up and saw one dome light burning dimly, so we had somehow left it on overnight and drained the car battery. AAA couldn't get there for at least 45 minutes, which would have put us in Salida, Colorado, our next stop, too late. So, we moved all of the stuff to my husband's SUV and used that vehicle instead for the rest of the trip. That made our gas cost higher, but we had the luxury of heated seats, too.

Unfortunately, we didn't get any photos of our "Constructing a Mystery" workshop at The Book Haven in Salida, probably because we were too busy having a good time and signing books. That night we gave ourselves the treat of a stay at the Mount Princeton Hot Springs Resort. We soaked in one of the hot springs pools until clouds moved in and snow started to fall. Then we had to come up with a quick exit strategy that got us out of the pool, dried off, into our snow boots and coats, across the bridge, down the stairs and around the corner into the bath house as fast as possible before we caught a chill. Being a "pantser," Ann said she did more planning for that run than she does when she starts a novel!

Tomorrow, I'll post more photos from the trip.
Posted by Beth Groundwater at 5:00 AM

It sounds like you guys had an awesome time, with some sales and a lot of good showings.

Note to self: watch the dome lights when leaving the car.

Thanks, Peg and Jenny, for your comments! And Jenny, can you believe that this was the second time in a week that the dome light was left on in one of our cars? The other time was when I took a van load of stuff to Goodwill and one of the guys hit it when they were unloading things. Since it was daytime, we didn't notice the light was on---until the battery ran down. Thank goodness we have a car battery charger at home!

Sounds like a great time and very productive. Aren't you glad you had the option of taking your husband's SUV?