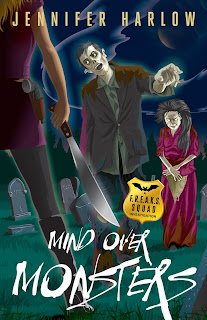 As promised yesterday, fellow Midnight Ink mystery author Jennifer Harlow is visiting my blog today. To read her bio and see her photo, please page down to yesterday's post.

Above is the cover photo for the first book in her F.R.E.A.K.S. Squad Investigation mystery series, titled Mind Over Monsters. The sleuth, Beatrice Alexander, is no ordinary schoolteacher—she can move objects with her mind, an embarassing skill she has yet to master or embrace. After nearly killing her brother in an accident, she joins the F.R.E.A.K.S. Squad, the Federal Response to Extra-Sensory and Kindred Supernaturals. This top secret branch of the FBI combats ghosts, ghouls, and other monsters threatening humanity. With her teammates—among them a handsome fomer-detective werewolf and an annoying vampire hell bent on seducting her—Beatrice investigates her first case. Disgustingly dismembered bodies have turned up, bearing the bite marks of the undead. Someone—or something—is raising a horde of hideous, bloodthirsty zombies. Armed with Bette, her trusty machete, Beatrice takes on the master of the flesh-devouring corpses who’s guarding a horrifying secret…


Shudder! Doesn't this sound like a fascinating read? And there's a lot of humor in it, so it's fun, too. Below is Jennifer's interview with Beatrice. Please leave a comment for either one of them, and if you have a question of your own for either, ask it!

An Interview with Special Agent Beatrice Alexander
By Jennifer Harlow
Through some of my Pentagon contacts (thanks Daddy and Uncle George W.) I was given exclusive access to the clandestine branch of the FBI known as the F.R.E.A.K.S. or Federal Response to Extra-Sensory and Kindred Supernaturals. Their newest agent, former schoolteacher and telekinetic Beatrice Alexander, agreed to meet with me under the cover of night at a coffee shop somewhere in the Midwest. (It rhymes with “Ansas”)

So, thanks for agreeing to do this.

Nice interview. Beatrice, what's the worst thing and best thing about having your powers?

Very cute and entertaining interview. Thanks for sharing

Best-You don't need a remote to change the channel on the TV.
Worst-You get angry and accidently explode someone's head. Literally. Not cool.

Thanks for your comments, Shannon and mystichawker! I hope we get some more today.

And thanks to Jennifer for such an entertaining post!