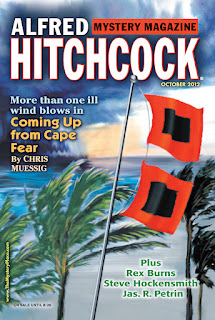 Today Edgar Award winning mystery author Rex Burns is guesting on my blog, with an article about his short story protagonist, Aboriginal Constable Leonard Smith, who will appear in one of Rex's short stories to be published in the October, 2012 issue of Alfred Hitchcock Mystery Magazine. I hope you enjoy the article, and if you have a question for Rex about his short stories, or anything else, please feel free to ask it in the comments!


Australia, for me, is a land of fascination: Sydney, with its magnificent harbor and haunting echoes of settlement at the Rocks; Melbourne, rivaling San Francisco in its mix of sophistication, dining, and entertainment; Perth, reminiscent of sunny San Diego fifty years ago. But most emphatically, The Kimberley.

This thinly settled region of northwest Australia, a thousand kilometers north of Perth, ranges from the spinifex-clad deserts of the south up to the tropical coral beaches along the Indian Ocean and the Timor Sea. From east to west it's 600 kilometers from the old pearling center of Broome to the modern, booming town of Kununurra; and it includes vast and empty plains, low but challenging mountain ranges, deep gorges, outcroppings of phantasmagoric boulder fields and hoodoos, and rivers that flood in the Wet and disappear in the Dry. It's a landscape that, in addition to having unique and interesting characteristics, provides a writer with a variety of emotional effects that can intensify or even comment on a character's mood or the story's action.

It is also part of the single largest police district in the world.

Much of the region is maintained as Aboriginal Reserves. These have their own native police with limited authority, a governing council representing the various skin-groups that inhabit the Reserve, and a web of social services whose complexity varies with the needs of the population. There is also a very gray area of authority: local Reserve authority versus that of the state of West Australia and of the federal Australian Government. The resulting ambiguity in responsibility is being clarified by various court cases and provides rich material for developing complexities in plot and police activity.

The Reserves also have their share, and often more than their share, of violence and crime. Alcoholism and its attendant problems is a serious issue on almost every Reserve, along with petrol sniffing by the young people, narcotics use, child molestation, theft, and explosive violence. In short, despite the exotic cultural make-up of the population, the police concerns are familiar and mirror both the criminal activity and racial jealousies of the larger Australian society. For this writer, it's not so much the specific criminal activity that draws attention as it is the personalities, manners, and culture of those involved in those activities.

Constable Leonard Smith, the short stories' protagonist who is half-Aborigine and half-White, is my link between the Kimberley's physical and cultural settings and the reader who is probably not familiar with the region. Like many mixed-blood orphans, he was taken away from the Reserve to receive schooling in the British tradition. It was felt, and in many cases it was true, that a white education better prepared the child for life in the modern world. It also meant that Smith grew up largely ignorant of his mother's Yawuru culture, myths, and language. This allows me to hide my own ignorance of Aboriginal life behind Smith's ignorance. But his (and my) gradual education in Aboriginal lore as each case unfolds allows the reader to learn as well, and hopefully to do so without slowing the tale's action or making the author seem pedantic in presenting a point.

In addition to finding material in the unique landscape and cultures, the languages of both the Aboriginals and of the Sandgropers—as West Australians are called—have their own idioms. Many Aboriginals speak three, four, or five languages: their own tribal language, the language of one or more adjoining groups, Kriol—the lingua franca of the bush—and English. The latter is, of course, the Australian variety which is rich in linguistic play. The challenge for me, writing for an American audience, is to keep a feel of authenticity in the diction, syntax, and rhythms of my characters' speech without confusing the reader as to the meaning of that speech. Sometimes I am successful, sometimes not; but when in doubt, I err on the side of linguistic authenticity and rely on the intelligence of the reader to grasp at least a sense of a term's meaning. Sometimes this can be achieved by associating an unfamiliar phrase with a clarifying action: "'Ha!' Teeth flashed in the woman's face, then disappeared like, Leonard thought, a crack of lightning during the Build Up to the Wet.' Other times an outright definition can't be avoided: "'Miss Daisy! Bibi Daisy!' Leonard still referred to her with the Yawuru word for his mother's sister." And often the reader can guess what a colorful term means: "Left me bloody-well gob-smacked, it did."

Constable Smith is, and will remain, a personality undergoing development. His ignorance of his own heritage provides a psychological tension that, I hope, will give room for that development. On the one hand is the strength provided by his objective view of both Aboriginal and White cultures. On the other is an often-felt uncertainty about the accuracy of his perception of those people he must analyze for truth and motive. The result causes him to be almost self-effacing, except when he needs to exercise his authority. Acutely observant of human nature in manifold forms, he shows the curiosity of an orphan growing up in a world of divergent and often conflicting values. This allows him to achieve acts of justice that are not always sanctioned by White Law or by Aboriginal Law.

And he provides me with a good tool to explore a fascinating place and people.

What an interesting character! Now, does anyone have a comment or question for Rex Burns?
Posted by Beth Groundwater at 5:00 AM

I love this character and the short story series appearing in AHMM. Rex, your use of local dialect is just right - not so heavy as to confuse the reader, yet rich enough to leave no doubt as to our location.
Catherine Dilts

Well, I'm jealous. How did Rex develop such a desire to write about Australia? Good post.

Thanks, Catherine and Mario, for sharing your day(s) with me. It's good to know that the dialect doesn't confuse readers (since it often confuses the author!). And, Mario, you needn't feel jealous--your work is tops. The source of my Ozmania is my late wife who was a Sandgroper and very proud of it--justifiably.
--Rex

I had to laugh. Hiding behind your character's ignorance. How clever! But then, I think that maybe the reason for so many amateur sleuths. The writers don't have to be experts in police procedure, which is fine by me. Amateurs can be more creative and less bound by the law. But your character isn't an amateur and faces difficult cases. I've enjoyed your shorts, Rex.

Many thanks for your comment, E.B.--it's interesting to see the "talented amateur" sleuth as tending to work outside social bounds, while the police sleuth is pent within the social bounds of legal procedure. The first, as you note, has a lot more freedom.
Very glad that you enjoy the stories--that means a lot.
--Rex

Thanks so much for visiting, Rex! I really enjoyed your article and your responses to comments. Keep 'em coming, folks!