What I've Been Working On Lately

First, I hope those of you who read Mystery Scene magazine have read my New Books article, "Fishing for a Mystery" on page 58 of the latest issue, Number 125, to promote Wicked Eddies, the second book in my RM Outdoor Adventures series. The editors and I had a lot of fun with the article, including adding a list of fly-fishing terms just before the issue went to press.

As I stated in my "Busy as a Bustling Bee" post on July 6th, I worked on two big projects in July:

1. Editing and turning in the manuscript for Basketful of Trouble, the third mystery in my Claire Hanover gift basket designer series.
2. Proofing the galley for the re-release in trade paperback and ebook of book two in the series, To Hell in A Handbasket, before it gets sent to the printer for publication in November.

I've also kept my blog going, with one mystery author guest each week and my own posts. And, I prepared the class handout for the Chaffee County Writers Exchange workshop I'm giving on Saturday, August 25th. I hope to see some Colorado writer friends there! I also hope to see some at MWA-University in Denver on Saturday, August 11th, which I'll be attending to "refill the well." To find out more, and to register, go HERE.

During August, I will be editing the manuscript for Fatal Descent, the third mystery in my RM Outdoor Adventures series starring whitewater river ranger Mandy Tanner. I've received edit requests from my editor at Midnight Ink, and I have to rename two characters. Two lucky mystery readers "won" character names in the book at this spring's Malice Domestic conference charity auction. I've already been in touch with both and know which characters will be named after them. I'm going to have fun tacking as many of their personal characteristics onto the characters as I can. And, the edit requests from my editor don't look too onerous, so I'm looking forward to the work.

And in the meantime, I'm trying to keep in shape with hiking and biking (see below). 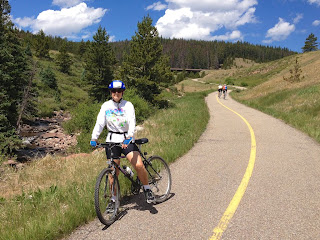 No moss grows under my shoes!
Posted by Beth Groundwater at 5:00 AM

Very cool. I'm looking forward to your next round of books.