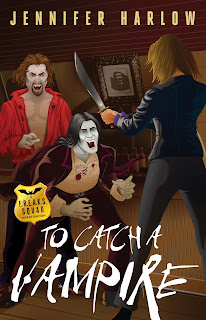 As promised yesterday, fellow Midnight Ink mystery author Jennifer Harlow is visiting my blog today. To read her bio and see her photo, please page down to yesterday's post.

The photo above is the cover for her new release this week, To Catch a Vampire, the second book in her F.R.E.A.K.S. Squad Investigation series. In the book, Beatrice Alexander, telekinetic special agent, is still adjusting to life among the F.R.E.A.K.S. while wiping out zombies and other supernatural threats. When Bea learns about her "special assignment" investigating a series of human disappearances with Oliver Montrose, her gorgeous but annoying vampire co-worker, she reluctantly agrees to go undercover. Disguised as a married couple, they infiltrate the gothic vamp scene in Dallas. While sniffing out clues, Oliver's convincing public—and not so public—displays of affection have Bea swooning in her bustier and fishnets. Between contending with her fake husband's ex-lover Marianna and feeling guilty for hiding the mission from her werewolf crush Will, Bea discovers she's not the only F.R.E.A.K. keeping secrets. Clubbing with the undead turns bloody when Oliver's old enemy, the Lord of Dallas, decides to seek his revenge. Caught in the crossfire, Bea is up to her neck in blood-sucking trouble.

This sounds like a really fun read! Below is Jennifer's guest article about her love for libraries. Please feel free to tell us about your favorite library or to ask Jennifer a question in the comments. 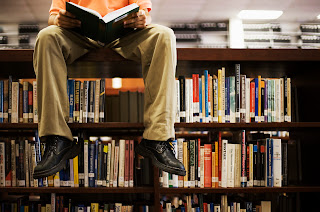 For the Love of Libraries
Jennifer Harlow

Reading is in my blood. Both my parents are huge readers. In a week they go through a book a day. I can't remember a single week in my whole life where they haven't had a book in their hands. Every night before I went to bed as a child one or the other read at least two stories to me. (Did I mention that my parents are awesome? Well, they are.) I got this "reading" gene big time. The story goes that when I was four Mom was reading to me, and she noticed I was mouthing the words before she said them. She handed me the book and I started reading to her. I haven't stopped since. On rare days when I have nothing to do I have been known to read three books in that one day. They're usually James Patterson's, but I still count them. So libraries were a big part of my childhood and still are today. I Heart Libraries.

The first time I realized this I was eight. We were living in Sterling, Virginia at the time and they just built this new library. I was going through my classic movie monsters phase, as we all do, and they had all these kid books about them! Here was this magical building that gave me what I wanted. For free! I could get as many as I could carry. I loved this place so much I even volunteered for special programs like animal shows and reading to little kids, well littler than me. (I was eight so I mostly handed out programs to people walking in, but still.) It only lasted a short time because, you know, elementary school got in the way. But Mom would still take me at least once a week to get my fix.

As the years progressed, and we moved around even more (I'm at an even dozen now), I had to find some sort of lifeline. Something that could stay consistent in a crazy world. Libraries provided that. The location might change but their services and the books stayed the same. When I went to college the third thing I did after moving into my dorm and finding the dining hall was to hot-tail it to the library, sit down at a table, and read. The strum and drang inside my head faded away surrounded by all those books. It was as close to home as I could get.

I wrote my books in libraries too. If you're so inclined to stalk me check out the Acknowledgments section of the first book in my F.R.E.A.K.S. Squad Investigation series, Mind Over Monsters. Those are my usual haunts. I just sit down at a table or study carrel, put on my headphones, and write. It gives me a place to focus on the task at hand. (And on occasion shoot flirty looks at cute guys.) Libraries are a safe place to do research, be quiet, and find my next mental adventure. So imagine my glee when I came in to work on my next novel and found my own book on the shelves. Even better when an hour later I went to see it and the book was gone and one of the librarians I know winked at me as I passed. So yes, I love libraries and the people who work in them. Always have, always will. They make what I do possible (and give me a free fix of my drug of choice).

So support your local library. Volunteer. Donate books. If you see programs getting cut due to budget problems, speak out. Viva la biblioteca revolucion!

I use my library a lot. If there's a book not in the system I use a program called ILL - Internet Library Loan.

Mike Kammer tried to leave a comment here and couldn't, so he made it on Facebook, and I'm posting it here for him:

"The blog does not seem to like my post, so here it is: I loved the library as a youngster for the normal reasons...then during the winter in college for the warmth going to and from home and classes...and now because I married a wonderful librarian - we even had Jimmy Buffett's "Love in The Library" for our wedding dance."

I have cards at two library systems in VA. I don't think they have an ILL though.

Due to severe dyslexia I went to a special school in the middle of the woods with an incredible library that had huge skylights. The books were color coded by reading level and when I got there at age 8 I couldn't even make sense of the lowest level (red). I remember sitting at a table looking up at the clear blue sky above me and promising myself that one day I'd be able to read any book on the shelf. Four years later with the help of amazing teachers and innovators as well as my own persistence I could read at college level. That library is where I got my first taste of how hard work pays off.

And Emily you not only learned to overcome your disorder but you even went so far as writing an excellent book yourself. Congrats on being in the top 5 of the Mystery Kindle section for almost a week. Well deserved. :)