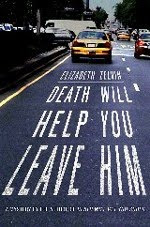 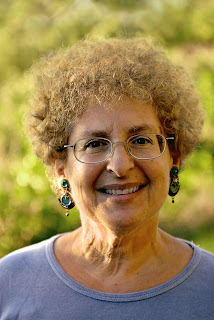 Today I am pleased to welcome Elizabeth (Liz) Zelvin to my blog. To read her bio and a short blurb about her latest release, Death Will Help You Leave Him, scroll down to Monday's "teaser" post for Liz's visit. Today, we have photos! Of Liz and her book cover. Also, her answers to my interview questions follow. Please feel free to ask Liz questions here today about herself and her books, and if you've read any of her work, share your praises with the rest of us.

1. Please describe your current release and the series in which it’s contained in more depth.

Death Will Help You Leave Him is the second book in the series that began with Death Will Get You Sober, featuring recovering alcoholic Bruce Kohler and his friends, Jimmy, a computer genius who’s been sober a long time and Jimmy’s girlfriend Barbara, an addictions counselor who’s also a world-class codependent. In the first book, Bruce got sober—and stayed sober by becoming involved in a murder investigation. In this one, he’s still sober, so he has to deal with all the stuff that he blotted out with booze over the years, especially emotions and relationships. He’s torn between a budding interest in Luz, the friend whose abusive boyfriend is murdered in her apartment, and a toxic but very powerful old relationship with his ex-wife, Laura, who’s pretty crazy. The idea of the series is to show through Bruce how remarkable the transformation that takes place in recovery is, whether it’s recovery from alcoholism or some other addiction or compulsive behavior. He’s coming back to life and taking responsibility for the first time, and it is not an easy process. Throw in a murder and stir, and you have a volatile situation—which is of course what writers and readers want.

2. What tools and process do you use to “get to know” your characters before and while you’re writing the books?

That may be the wrong question for me, because the whole process is completely intuitive. I know certain things about how alcoholics and codependents feel and act—when they’re at their most destructive and out of control, when they’re in that shaky state of early recovery, and when they start to use the 12-step programs and in some cases the tools of therapy to make remarkable changes. But what makes these characters individual and not simply generic recovering people is a matter of voice. Bruce talks in my head all the time, and at this point I have a good handle on what he will and will not say. Someone who edited a short story of mine a while back tried to make some changes that I think demonstrate the difference. Bruce said something was “not far enough,” and the editor wanted to make it “not sufficiently far.” Then he referred to “alcoholics like me,” and the editor suggested “alcoholics such as I.” Bruce wouldn’t say “sufficiently” or “such as I” in a million years.

The process was different with Barbara, the nice Jewish girl from Queens who can’t get past her codependency. She started out as a first-person character with a backstory a lot like my real-life background. What I learned in the editing process was how to make her less like me. I began to take her codependent tendencies—rescue, control, minding other people’s business—over the top, and that was a lot of fun. She also had a tendency to be a little preachy, and I began to see that readers might not like her as much as I did unless I fixed that. Thanks to an editor’s suggestion, I took her from first person to third—got a little distance from her—and that worked much better.

As for Jimmy, who’s a history buff like my husband—well, if you ask my husband, he’ll tell you my process was stealing all his one-liners.

3. How does your training and work experience in psychotherapy help you with character development?

My professional training and knowledge doesn’t exactly dictate who my characters are as people. But if I have a character who’s depressed or suicidal or manic or narcissistic, I’ll make their behavior and thought processes plausible. I won’t use the wrong words, which is a bit of a pet peeve of mine. If someone feels ambivalent, I won’t say he’s schizophrenic. Or if she is in a dissociated state, I won’t say she’s schizophrenic either. Schizophrenic is something else. Dissociation can be as mild as road trance—or getting lost in a good book—and as extreme as dissociative identity disorder, which used to be called multiple personality disorder. I’m not going to get that kind of thing wrong. And if someone does have DID, I’m going to make sure they have a history of childhood sexual abuse, because that’s where it usually comes from—that or some other severe trauma that the child survived only by walling part of him or herself off from what was happening.

I said “bad relationships” rather than any kind of clinical term because I want to engage the reader. Everybody’s had at least one bad relationship of some kind. The two that popped into my mind just now were my first marriage, to a guy who was quite controlling and argumentative, and a boy who stalked me when I was fifteen. Really—he was a classic erotomanic stalker. Google it if you want to know what they’re like. Only we didn’t have the term “stalker” then, and everybody around me thought it was funny. It went on my whole senior year of high school. His delusion was that it was a relationship.

But I don’t think the “badness” of the relationships in Death Will Help You Leave Him are debatable. Frankie, the guy who gets killed, bullies and spies on and intimidates Luz, his girlfriend, probably hits her—shoving and shaking are also physical abuse, by the way—periodically walks out on her, and lies to her about his marriage. No wonder she’s the prime suspect when he’s killed in her apartment.

Then there’s Bruce’s relationship with his ex-wife, Laura. She’s all sex, drugs, and rock & roll, and he’s trying to stay clean and sober. She takes him to bed and then rubs his nose in her relationship with her new boyfriend. She makes suicidal phone calls to him late at night and guilt-trips him into taking care of her. She doesn’t want him, but she won’t let him go. And he’s hooked, even though she epitomizes the “people, places, and things” he needs to stay away from to remain in recovery.

The third bad relationship is Laura’s with her new boyfriend. She’s pathologically attached to a guy who’s brutal to her. There are reasons for this. I wrote a piece called “Why She Can’t Throw the Bum Out.” It’ll appear in the November issue of Mystery Scene. The first version was too clinical—I got caught up in explaining the reasons—and I had to rewrite it and bring it back to the story. And even more in the book itself, I have to keep telling the story and not start describing a clinical case.

Jimmy and Barbara have a good relationship. It’s not a perfect relationship, and I don’t dwell on it. But you can see the affection between them and the graceful way they handle how very different they are from each other. There’s a lot of backstory that doesn’t appear in anything I’ve written so far. And there’s future backstory that I might eventually get a chance to write. For example, Barbara’s biological clock is ticking. But Jimmy is afraid he’ll be a father like his alcoholic dad. And both of them are scared that any child they have will be genetically predisposed to alcoholism or other addictions. That’s more like a biological bomb ticking—very scary for those involved.

How do you distinguish good from bad relationships? Uh, it’s not a good relationship if one partner abuses the other physically (hitting, beating, kicking, punching, pinching, shoving), sexually (forced sex, including marital rape), verbally (calling the partner obscene names, belittling, perennial sarcasm), or emotionally (bullying, intimidation, contempt, controlling, the silent treatment). In fact, I’m not exaggerating—you’d be amazed how many people have experienced some kind of abuse. But for a measure of the necessary conditions for a good relationship, I like the tenet from relational psychology (for which I bless the feminist psychologists of the 1970s and 1980s, who finally figured out how women develop) that says that an emotionally healthy relationship is mutual and growth enhancing. Think about it.

Character every time. No contest. People are the most interesting thing in the world, as far as I’m concerned: their feelings, their relationships, their struggles to change and grow. That’s not only why I’m a writer, it’s also why I’m a shrink. E. M. Forster’s famous tag, “Only connect,” works for me.

I’ve already done it, when I talked about the high school stalker. I’ve been thinking about it since I read an article on stalking in one of the MWA or SinC newsletters (if anyone remembers which one, please email me), and I might blog about it eventually. But if you really want the deep stuff? West Wing or True Blood and peppermint stick ice cream.

8. What’s next for you, and Bruce, after Death Will Help You Leave Him?

The next book has Bruce, along with Jimmy and Barbara, taking shares in a lethal clean and sober group house in the Hamptons. And they may appear in some more short stories: three have been published so far. But a very different story, a historical about a young Marrano sailor on Columbus’s first voyage, has been accepted for Ellery Queen’s Mystery Magazine, and I’m toying with the idea of a Young Adult novel about that character.

You can visit my author website and I blog weekly on Poe’s Deadly Daughters. I’m also on Facebook and open to friends—though not to any of the games or applications. Death Will Help You Leave Him is in stores now, and I’ll be visiting some bookstores, libraries, and writers’ groups in North Carolina in November. I’m delighted to meet with book clubs if I can get to them, and discussion questions for both Death Will Help You Leave Him and Death Will Get You Sober are available on my site. In my “other hat,” I do online therapy at LZcybershrink.com. And if you want two great gifts for the mystery lovers on your holiday lists, I hope you’ll consider not only Death Will Help You Leave Him but also the holiday crime anthology The Gift of Murder, which benefits the Toys for Tots Foundation. I have a link to the ordering information from Wolfmont Press on my site. My story in the anthology is about Bruce, and it’s called “Death Will Trim Your Tree.”
Posted by Beth Groundwater at 6:00 AM

Hi, Beth and Elizabeth, I'm so glad you brought Barbara to us, Beth, because I remember yesterday reading these fabulous titles. The series sounds fascinating and I can't wait to add it to my to be read list. Love your thoughts on characterization. Without it, in my opinion, you just have words.

They are great titles, and it's great to learn a little more about the books. I like your comments on character being the most important part. I agree. Thanks Beth and Liz.

Thank you, Donnell and Sheila, for your comments. Got any questions for Liz?

Can't wait to read this. Loved the first one, Liz. Nice interview, Beth--thanks!

I very much like the book title. It instantly draws me.