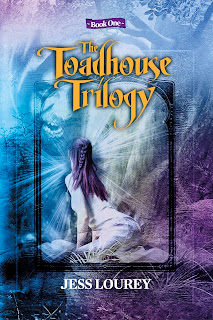 As promised yesterday, fellow mystery author Jess Lourey is visiting my blog today. To read her bio and see her photo, please page down to yesterday's post.

The photo above is the cover for her recent July release, The Toadhouse Trilogy: Book One, which begins her new young adult series. In the book, Aine (pronounced "Aw-nee") believes herself to be a regular teenager in 1930s Alabama, but when a blue-eyed monster named Biblos attacks, she discovers that the reclusive woman raising her isn't really her grandmother, that fairies are real, and that she's been living inside a book for the past five years. With her blind brother, Spenser, she flees the pages of the novel she's called home, one terrifying step ahead of Biblos' black magic. Her only chance at survival lies in beating him to the three objects that he desires more than life.

As she undertakes her strange and dangerous odyssey, Aine must choose between a family she doesn't remember and her growing attraction to a mysterious young man named Gilgamesh. Only through treacherous adventures into The Time Machine, Dr. Jekyll and Mr. Hyde, A Tale of Two Cities, and the epic Indian saga The Ramayana will she learn her true heritage and restore the balance of the worlds... if she can stay alive.

Wow! That sounds like a pretty amazing story to me! Below is Jess's guest article. I'm sure it will prompt many questions from my readers, and Jess is happy to try to answer them.

WHY I WENT FROM TRADITIONALLY PUBLISHING MYSTERIES TO SELF-PUBLISHING YA


Hello! My name is Jess Lourey, and I write the critically-acclaimed Murder-by-Month Mystery series. Those books have been lucky enough to have earned multiple starred reviews from Library Journal and Booklist, as well as two nominations for the Lefty Award for best humorous mystery. So why would I take time away from writing successful mysteries to self-publish a young adult novel? The short answer is easy: I had the idea for the YA book in my head, and once I got it written, my agent couldn't find a home for it. The long answer is, well, longer:

1. I'd been wanting to self-publish for a while. I heard the rumors--lots of money to be made, total control over the book, they sell themselves--and I wanted to know if it was true. Turns out it isn't, at least not yet, not for me. My book has been available for two weeks and only sold 47 copies. I just sent out 30 review copies and will soon be taking advantage of Kindle's free promotion, so hopefully I'll see a spike, but this definitely is not money printing itself.

2. I believe in the story I wrote. It combines fantasy, adventure, and classic literature, and there were times when I was writing it that I got completely lost in the story in the best possible way. I think it's a story others will enjoy, and so I invested $3000 in professional editing, $650 in professional cover art, $400 in professional interior design, $100 for an ISBN, $25 for expanded distribution, and another $500 in marketing. Will I see that investment back? Right now, it feels like I spent good money that I didn't have on a couple magic beans, but I have hope they will sprout.

3. Writing is always a gamble. We open ourselves up to criticism of our deepest ideas, our imagination, and our ability when we publish a book, each time. It doesn't get any easier, at least not for me. In some ways, it feels harder because there is more to lose. However, I believe we are all connected by stories, and that the writer's job is an important one.

4. I don't do well with "what-ifs." I would rather regret trying and failing than not try at all. I realize this can be a dangerous game, and it's the reason a lot of self-published books get a bad rap. The writer puts a lot of work into their story, and they don't pay attention to what their agent or the market is telling them, which is that their book isn't quite where it needs to be yet. If self-publishing had been popular when I completed my first book (1997), I would have published that steaming pile quicker than you could have said "you sure?" It would still be haunting me today. Fortunately, I didn't have that option. Also, my agent loves The Toadhouse. Most of the publishers loved The Toadhouse; they just said that classic literature wouldn't sell with teens. I disagree. I think teens are some of the savviest readers out there, and they're smart.

So, yeah. I'm barely a month into my self-publishing experience, and it's scary, and overwhelming, and humbling. It's also a great adventure. I'd be happy to share any of my hard-earned lessons with you, so ask away!

Cheers,
Jess Lourey
Posted by Beth Groundwater at 5:00 AM

Hey, Jess! I'm just starting TOADHOUSE, and it is brilliant. AS we've discussed many times, there's just no way to know what will hit and when. When just the right person reads your book--who knows what can happen!

(That's what happened to Charlaine Harris, right? When Alan Ball just happened to pick up a Sookie book? And the rest...is True Blood on HBO.)

And it's fabulous that you believe in your story so much that you marched through unknown territory to get it out there!

Tell us more about the book!

(Beth, so terrific to see you in Denver!)

Jess, you said it well. Better to try and fail than not to have tried at all--and just maybe you will succeed. What ifs just niggle at one.

Beth. Thank you for inviting Jess to your blog. Jess, I am downloading TOADHOUSE right now, and look forward to reading it. I appreciated your input on traditional vs. self publishing. The industry is changing so quickly, and we have to be willing to change too. Best of luck.

Helen said...
This comment has been removed by the author.
8:40 AM

I'm working on getting my first fiction book into print. At this point I'm looking for a cover artist. The first one I emailed set her price at $2200. Way out of my range!

Jess, kudos for following your gut! In time, I'm sure those magic beans will grow faster and farther than that crazy weed in your backyard. And that's saying something!

Thank you, Hank! You know, Zoe (my daughter) JUST decided to finish the book (I paid her $20 to edit the first 50 pages before I published), and she said she actually likes it. She used the word "actually." That's the best review I could get!

It's so true, Michael. And "niggle" is a fabulous word.

Thank you thank you thank you, Erin! It'll be interesting, five years from now, what the publishing industry looks like, won't it? I agree it's changing so much, and nobody has the guaranteed crystal ball.

Helen, thank you so much for downloading Toadhouse! Crowdspring turned out to be an excellent resource for my cover art (http://www.crowdspring.com/). You set the price, and you get a lot of professionally-designed covers to choose from. If none of them works, you only pay the registration fee ($60, I think).

Isn't it a beauty, Kaye? I couldn't have asked for a better one. Thanks for the support!

That sunflower is a beauty, isn't it, Alan? It's STILL growing. Magic beans, up up and away!

Enchanting cover--who designed it for you? Also, I'm curious (considering your traditional publishing background) how you liked working with an editor you hired.

I also first sold a book to a traditional publisher in 1997, and am still writing for that publisher. Within the last few years, however, I also started self-publishing, and you're right, it's not for the lighthearted, but it's also invigorating to oversee the publishing process from start to finish.

Thanks for commenting, Colleen! I am in love with my cover, too. I posted the story comment to www.crowdspring.com, and professional graphic artists from all over the world created covers for me. I chose the one I want, and it's so beautiful! You set the price at the outset, so it ended up costing me $636. It would have been $60 if I didn't like any of the ones made for me.

The editor I hired I've actually worked with before. My personal experience in traditional publishing is that I haven't gotten much editing, and I want to put my best foot forward, so I hire my own editor. She's fabulous!

Hank and Jess,
Yes, it was great to see both of you in Denver for MWA-U, and you both delivered excellent workshops!

Thanks, everyone, for your excellent comments and questions. As you can see, Jess is right on the ball in responding to them. Let's keep the conversation going!

Jess, a friend who's been indie pubbing for about a year (and doing phenomenally well) told me that it takes having 5-6 books available and around 3 months before you see sales start to really take off. A year from now I have no doubt you'll be laughing all the way to the bank!

I think those numbers are pretty good, and they can always go up as people read the book, review it, and pass the word around. In addition, once you've put on more books in the trilogy, you can make one free: people will read it, and then BOOM--they buy the other two.

Don't give up on the self-publishing process. I think you did a very smart thing and that you are very savvy. You have a finger in two publishing pies. In this way, you get to eat two flavors of pie. (Can you tell I'm hungry, particularly for some French Silk?)

Congratulations on this launch and keep doing your amazing writing.

Jess, I have always been, and will always be, a big fan of yours. It's great that you took this leap of faith, but then, isn't that all publishing is? A leap of faith? We're like that guy in Field of Dreams. We write it, then hope and pray that it will find an audience.

I have my copy of Toadhouse book one -- I'm a big fan of YA novels and look forward to reading this one, Jess. It's so hard to advise other writers to take that big step and hire a professional editor when we just don't know how to make the sales numbers grow. I'll be interested in hearing what works for you.

You are so kind, Beth! It was also great to see you at MWA-U. Do you know that I've seen Hank's presentation seven times, and each time, it inspires me anew?

Julia, I am also now hungry for pie. And, you were one of the people who inspired me to self-publish, so thank you always for your wisdom and support. Always!

You're exactly right, Joanna. Thank you for your continued support and friendship!

Thank you for checking out the book, Patricia! I will definitely let you know if I find anything (I've got to find something!!) that works to push sales on a self-published novel. I think Julia Buckley is right that having a series is great--you make the first book free, which pushes the sales of the future books. Now, if I could just find a wrinkle in time...

Lois, I dearly hope you're right. Drinks on me if you are! :) Thanks for stopping by and commenting. I know what a busy woman you are.