This is the fifth of a series of trip reports about my husband Neil's and my trip to Japan on an Overseas Adventure Travel tour in October. Page down to read the other four, and stay tuned for more. I have a guest mystery author next week, then I will resume the trip reports on Monday, December 23rd, with our last location, Kyoto.

On October 24th, we took a chartered coach to the mountain villages of Shirakawa-go and Gokayama to see their distinct gassho-zukuri farmhouses characterized by steeply pitched thatched roofs (first photo below). At a visitor center there, we learned to make mochi (pounded rice--see me pounding in the second photo), which the staff shaped into balls and served to us with sweet red beans (third photo). Later in the trip, I bought sweets made from mochi stuffed with chestnut or sweet potato paste. 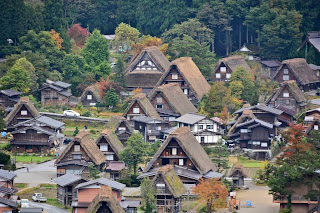 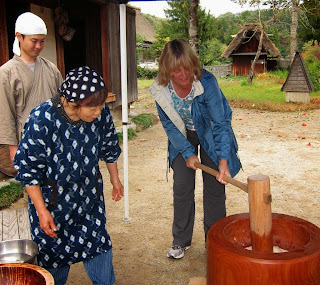 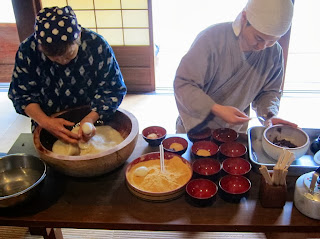 Next we visited Murakami House (first photo below), which was built in 1578 and is the oldest ghasso-style house in the area. There, we watched a traditional Kokuriko dance performance (second photo). The dancer is playing a sasara percussion instrument that is made out of 108 cypress plates
joined together. Then we looked over the collection of historical farm implements and tools in the large attic (third photo). After that we lunched at a soba (buckwheat noodles) restaurant (fourth photo) before saying goodbye to Gokayama and its arch shaped like a sasara (last photo). 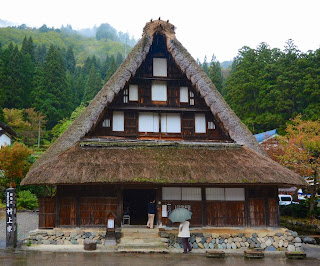 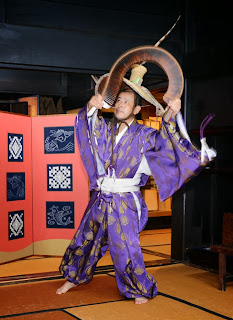 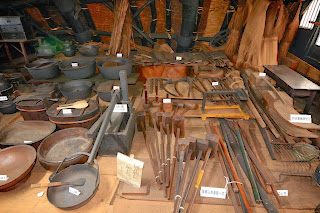 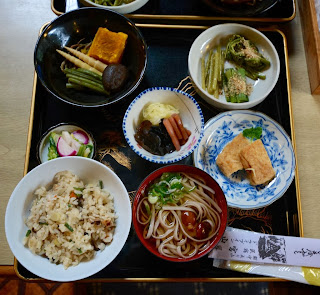 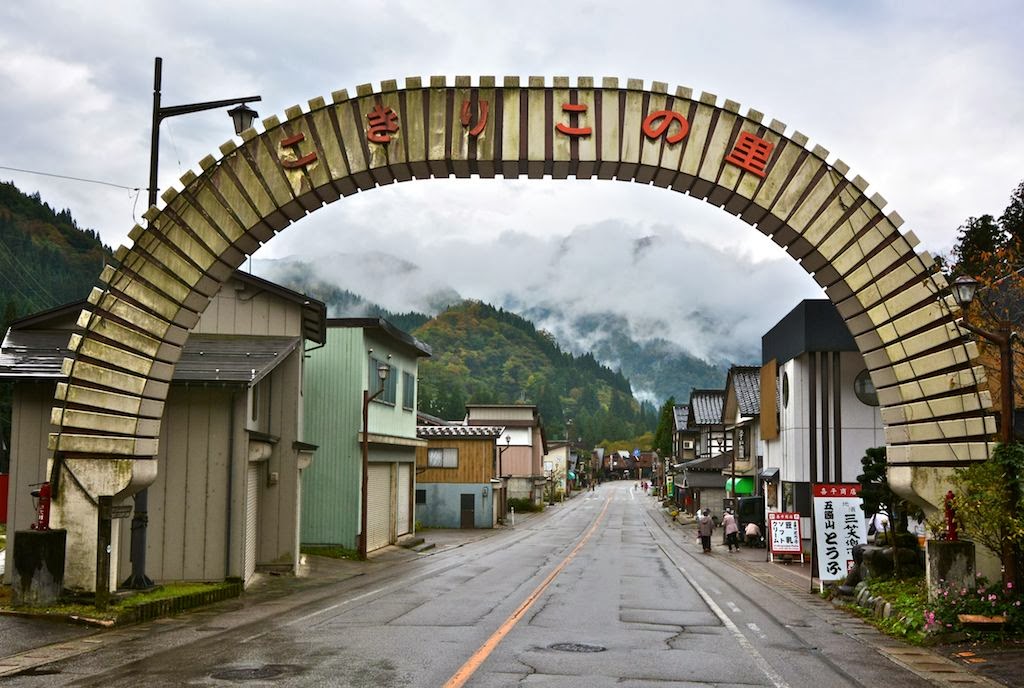 After lunch, we journeyed to a paper-making workshop to try our hand at making washi—a thick, fibrous paper made from mulberry bark. After dipping forms in a water bath of mulberry fibers (first photo below), and decorating our paper with some flowers, the staff finished off the sheets with a final coat, sucked the water out of the forms with what was basically a giant vacuum cleaner, then hung the sheets to dry (second photo). We took them home with us as a souvenir. After returning to Kanazawa, we went to the top floor of a department store (third photo) to eat dinner in one of the restaurants there. 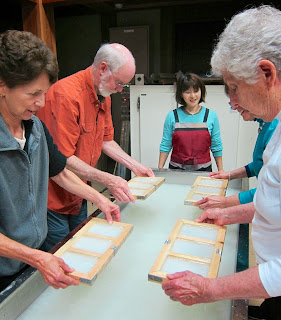 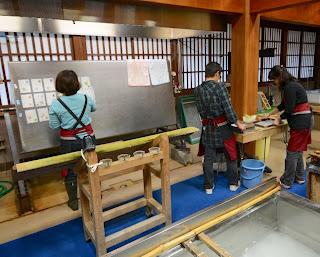 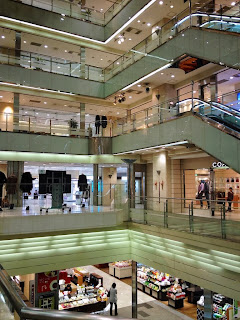 The next day, October 25th, we divided up to visit with local Japanese residents in their homes. Neil and I visited a gracious lady who dressed us up in kimonos for a photo (first photo below), served us tea, played her koto stringed instrument for us (second photo),  and showed us her home, including a home altar (third and fourth photos). We managed to communicate with a few words, some hand signals and pointing to pictures in a child's English book, since her English was limited and our Japanese was nonexistent. We spent a happy hour and a half visiting with her, even with the language difficulties, and showed each other family photos. 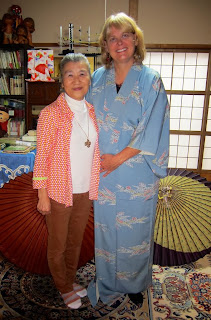 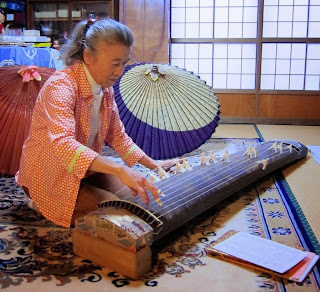 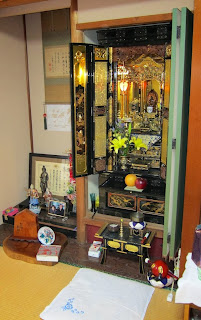 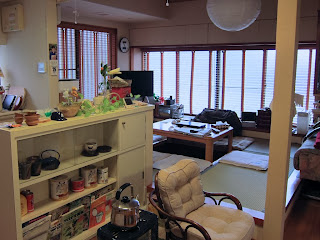 Then we shopped in a department store's food basement (first photo below) for meats on sticks (second photo) and a bento box of salads that became our lunch on the train to Kyoto. The third photo is the Kanazawa train station, the fourth is the train, and the last three are of the monstrous Kyoto train station. 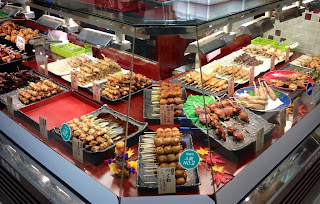 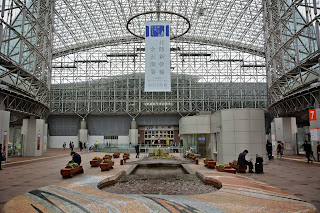 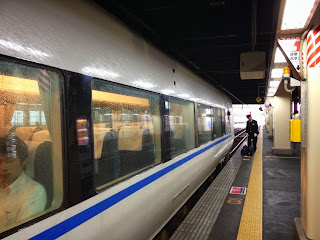 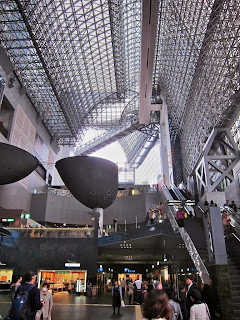 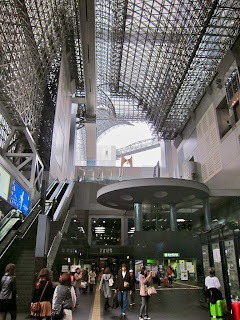 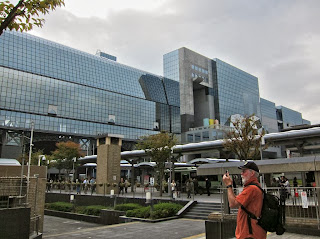 After arriving in Kyoto in the late afternoon, we checked into the Aranvert Hotel. Kyoto was phenomenal, so don't miss checking back in for the final set of photos from there!
Posted by Beth Groundwater at 4:00 AM

Hi Beth! Thanks for sharing your trip to Japan with us. I have enjoyed seeing your photos and reading about it.

Thanks, Heather. There are two more coming.