As I wrote yesterday, my husband Neil and I traveled to Japan in October on an Overseas Adventure Travel tour. This week and next, I am posting reports on my blog that each summarize a few days of our two and a half week adventure. This is the second report.

On October 18th, we visited the famous Tsukiji Wholesale Seafood Market in Tokyo (first three photos below), then had a brunch of very fresh sushi in a restaurant right next door (last photo below). 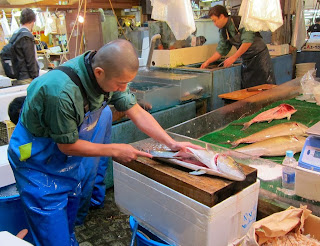 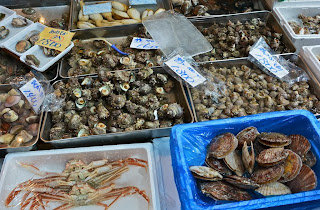 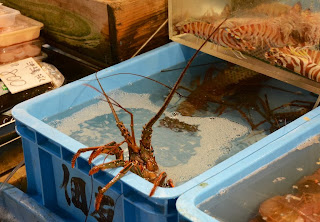 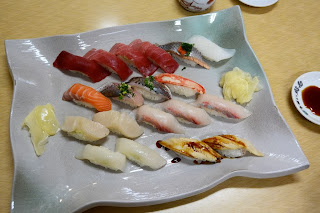 Next we toured the Hama Detached Palace Garden, also called Hamarikyu, (first photo) with its Nakajima teahouse (second photo), a beautiful Eden in the center of Tokyo. 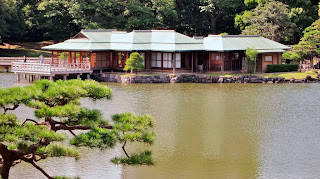 Then we headed for the Ginza district, famous for its high-class shops, such as pearl purveyor Mikimoto (first photo below) and ate a late lunch in a restaurant at the top floor of an interesting building (second photo) with round balconies at each level. 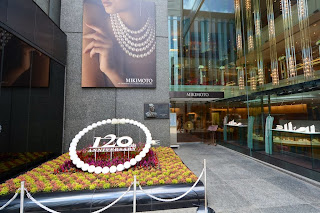 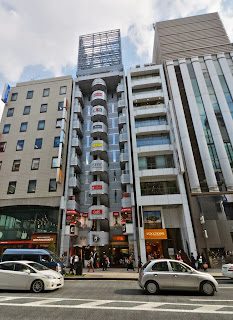 Next stop was the Kabuki-za Theater. It, like most of the temples, shrines, and other monuments we saw, had a display of sake (rice wine) barrels outside (first photo below), representing donations from sake breweries. We saw one act of an all-day, 9-act Kabuki performance at the theater (last two photos below, exterior and interior). The lively act included a swindle and a battle scene, and we rented headphones that played an English commentary during the performance. Unfortunately, no photos of the performance were allowed. 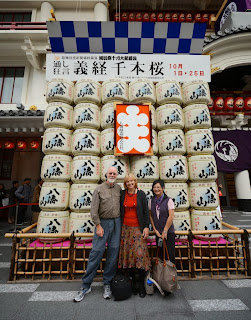 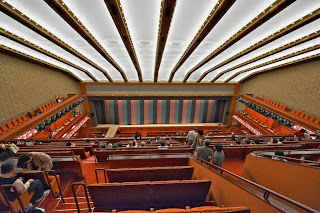 We exited the theater after night had fallen and had our "Lost in Translation" moment (first photo below) while walking through the neon lights of the Ginza district to see the spectacular interior of the Tokyo International Forum (second photo). After dinner in a nearby bakery, we traveled via subway back to the hotel, and it was still crowded with commuters then (last photo). 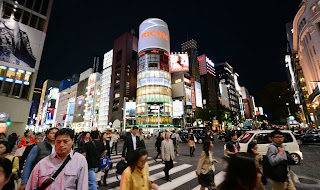 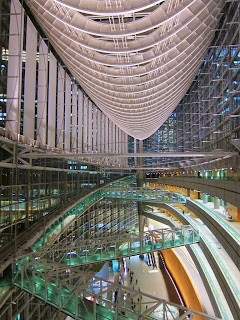 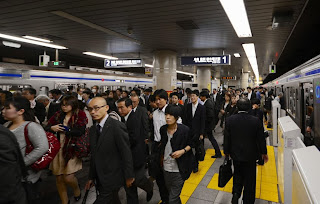 The next day, October 19th, we went to the plaza outside the Tokyo Imperial Palace to see the statue of Kusunoki Masashige (first photo below), a 14th-century samurai who epitomized the ideal of samurai loyalty. Then we took a group photo (second one below, I'm in the blue raincoat) in front of  the Nijubashi Bridge that crosses the moat around the palace. 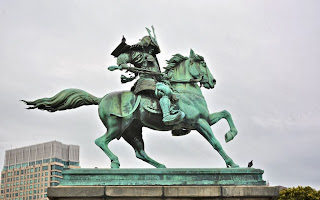 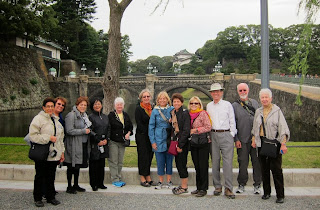 Next we visited Sensō-ji, the Asakusa Kannon Temple (first photo below), and its ornate altar (second photo). The whole complex teemed with people. As at all Buddhist temples, there was a station where worshippers could cleanse themselves (third photo) and another where they could light incense and pray (fourth photo). 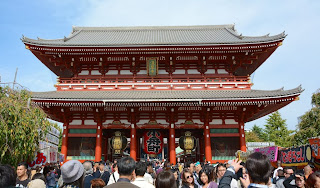 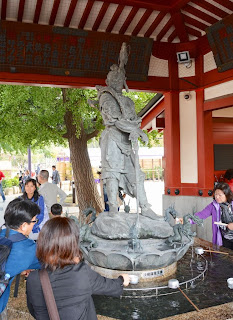 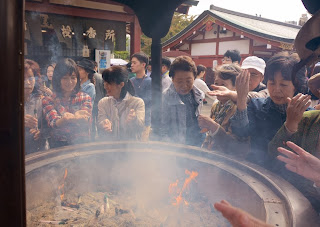 For lunch, our guide took us to the basement food garden of the huge Mitsukoshi department store in the Ginza district, where we shopped for Japanese delicacies, such as salads or Bento boxes (two photos below), to eat for a picnic lunch in the rooftop garden of the store. 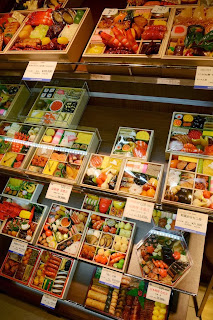 Then we went to Meiji Jingu, a Shinto shrine, with a massive torii gate at its entrance (first photo). All Shinto shrines had torii gates at the entrances. Some were painted red and some were left natural colored, like this one. Since it was Saturday, we were able to observe some children being brought in for blessings at ages of 100 days or 3, 5, or 7 years. They were dressed in traditional clothing, like the girl in the second photo below. Also, we observed wedding parties having photos taken and parading into and out of rooms in the temple where the bridal couple was blessed by a Shinto priest (see last two photos below). 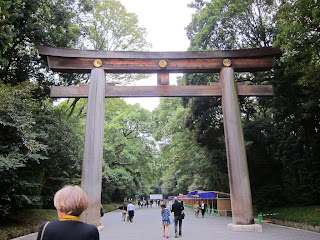 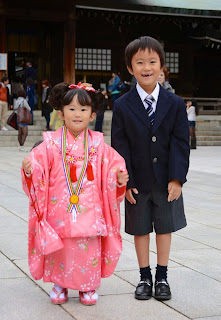 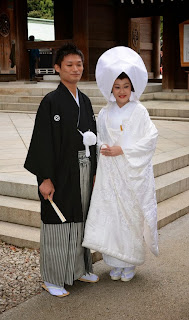 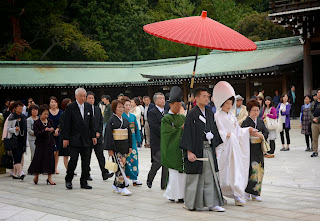 Dinner that night was at a tempura restaurant (two photos below). This was our last day in Tokyo. On October 20th, we left on a bus for the mountain resort of Hakone. 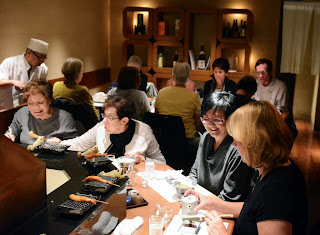 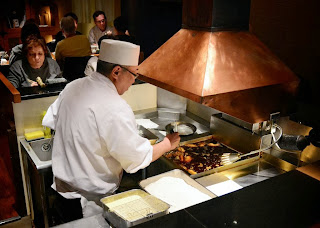 Thanks, Sharon! I highly recommend a visit to Japan--it's so clean and safe and the people are very helpful.